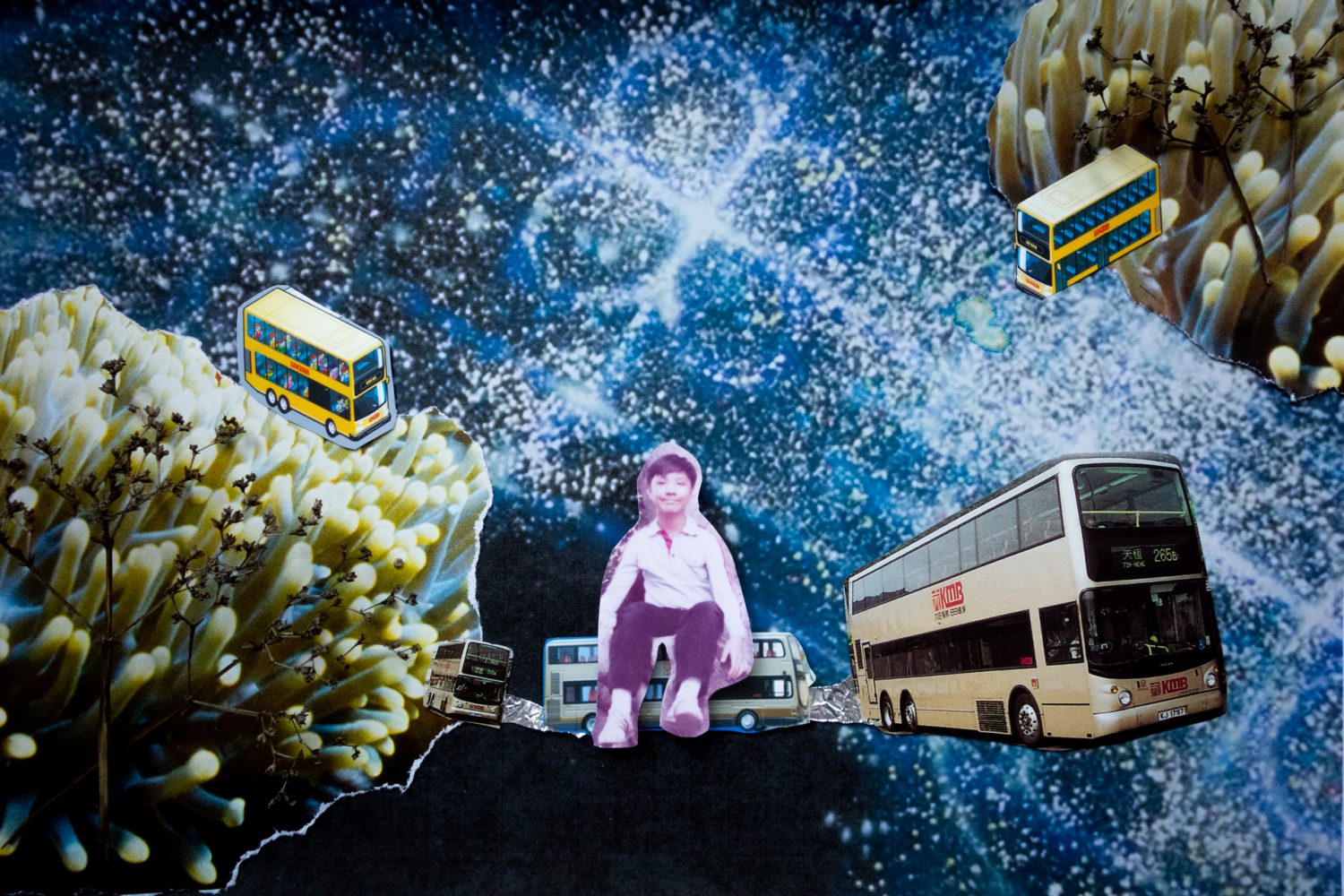 From "Kaufu" by Michelle Chan
Women in Film & Photography 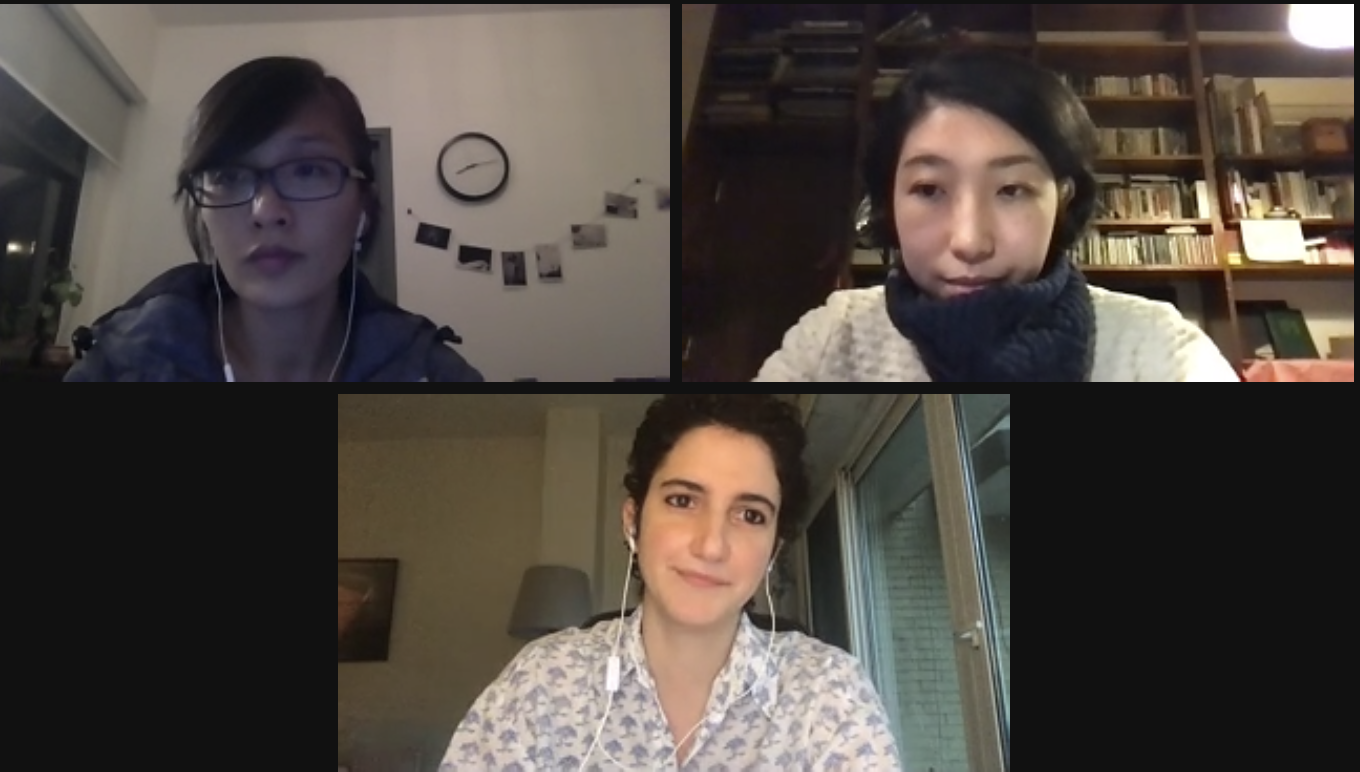 This recap of the session has been paraphrased for brevity.

Divya Cowasji is a photographer and documentary filmmaker from central India whose personal work focuses on the telling of oral histories on ideas of home and family, memory, place, play and the body. Her series Remember Me, currently exhibited at Objectifs, was a recipient of the India Photo Festival Grant 2021. 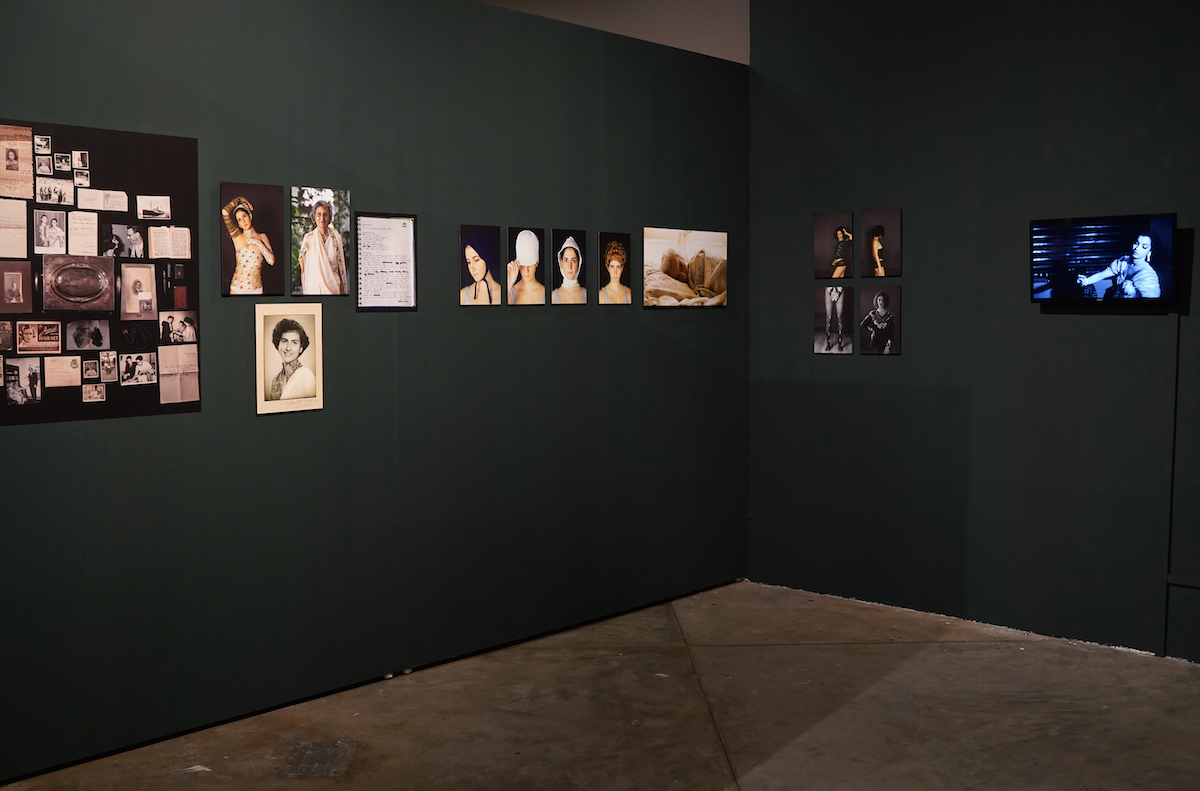 Remember Me is a “very intimate family history, told through the material objects that people leave behind and that are passed on through generations”. Divya embarked on this project after losing many senior family members in the span of a year, which got her thinking about “what happens when a person dies? What happens to their essence, thoughts, feelings, things they cared about and loved?”

Having grown up in an almost 200-year-old ancestral family home and with access to a rich oral tradition of her late grandfather’s numerous stories, Divya approached “engaging with things that were important to [her departed relatives] as a way of grieving, loving and honouring them”. It was also a “no-brainer” for her to include herself in the images; having played dress-up in “make-believe imaginary worlds” with a chest of her senior female relatives’ “fancy dresses”, “it made sense to interact with these things in a way that made sense to me, to have fun with them and give them new life”.

In this process, Divya was struck by how “you suddenly get access into the innermost private selves of relatives whose lives you’re cleaning up [after they have passed on]. What does it reveal about how they wanted to be remembered, and how you yourself want to be remembered?” Despite her sense of play, she also “felt the weight of being surrounded by this plentitude of history, of being left all these things, some of which have been handed down for five generations,  so lovingly by so many people. If I don’t have children, who do I pass all this onto?”

Divya Cowasji shares a video montage of her late grandmother.

Showing photographs of her late great aunt and grandmother who were “immaculately turned out people” till the very end of their lives, Divya reminisced how both women sought assurance that “we were going to love their things that they were leaving to [Divya and her mother]”. For Divya, her predecessors’ objects “offers little clues as to who they were before they occupied certain roles in our lives, and depict the rich full lives they led and all they went through”.

Michelle Chan is a visual storyteller based in Hong Kong. She explores Chinese mythology, folk religion and philosophy through everyday objects and experiences, and narrates stories that traverse the fine line between fact and fiction.

Michelle’s project Kaufu is about her mother’s brother, who passed away in 2019. Upon his death, the extent of his obsession with buses was revealed with the discovery of a huge collection of bus-related memorabilia in his flat. Michelle was not close with her uncle and felt “urgency in wanting to talk to these objects he left to connect with and understand him”. 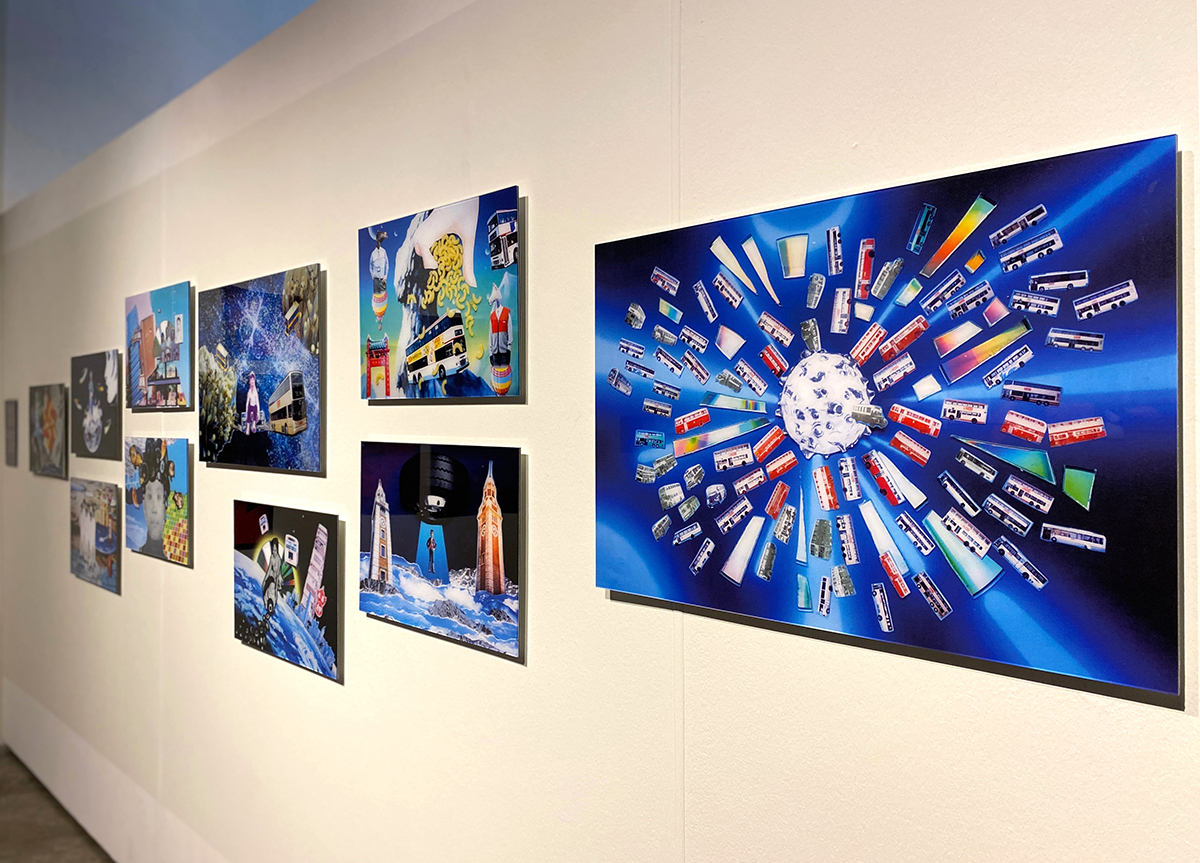 Michelle “spent a lot of time understanding and making sense of the archive”. The items her kaufu left behind included not only model buses; posters, postcards, photographs, news cuttings and books featuring buses in Hong Kong; and the uniform and sunglasses he wore as a bus driver but also notebooks in which he copied out song lyrics.

Michelle considered “how the objects’ meaning changed with [her] inheriting them, and how [she] could use them to connect back to his traditions and memories”. She learned through interviews with her mother about the family’s strong belief that “the more you worship the gods, the more you’re blessed” and about Chinese rituals in which “the dead souls are taken to the underworld and go through a series of events before they reincarnate”.

Michelle’s collages in Kaufu were inspired by one of his favourite comics, Galaxy Express 999, a Japanese manga series from the late 1970s about a boy who desires an indestructible machine body in order to live forever. The influence of its “psychedelic and sci-fi visual aesthetics of that period” is seen in the collages, in addition to other details that each bear particular significance, such as imagery from Chinese mythology, shiny bits of the CDs and DVDs her kaufu had collected, and bits of macaroni, which he ate daily for breakfast.

As she made the collages, Michelle questioned whether she was “hijacking” her uncle’s archives, as she did not know what his intentions were for his collections: “I feel like the collages should be returned to him to bring closure to the project and for my family, so I have decided to burn them as an offering on his third death anniversary next year.” She also had her mother write a poem expressing her feelings and memories about her late brother, and will incorporate it as a chant during the burning ritual. 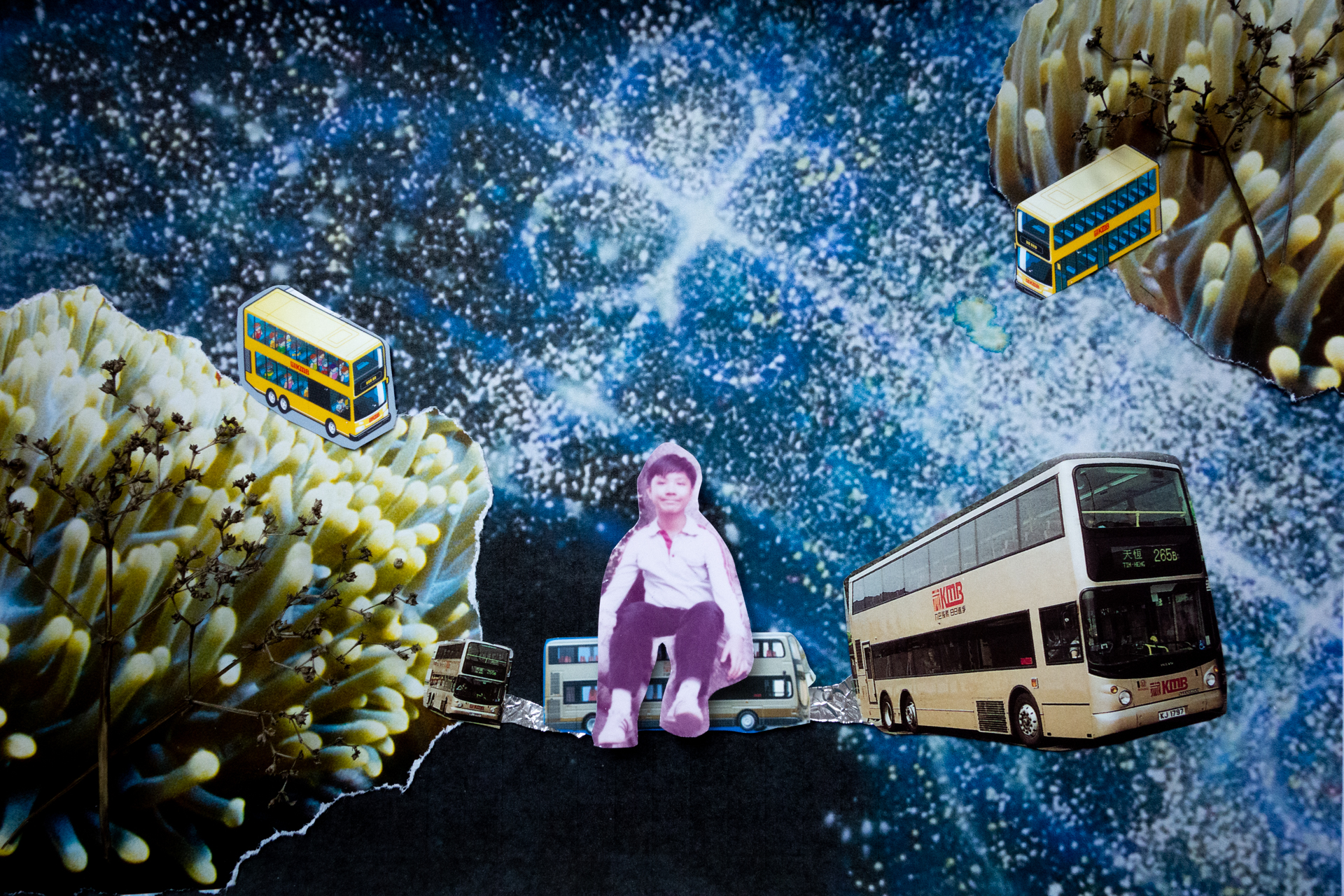 Michelle Chan on one of her collages in “Kaufu”: This features one of the rare solo portraits of my kaufu when he was young. The destination plate on the buses here states “天恆” (Tian Hang). “Tian” is one of the oldest Chinese terms for heaven and a key concept in Chinese mythology, philosophy, and religion. “Hang” means forever and everlasting.

Currently, Michelle is also working on the second part of this project, informed by what her kaufu’s collections introduced to her about “public history; about the relationship between buses and Hong Kong’s changing social and political environment”. She is using a specific retired bus model and route as a research method to examine pre- and post-handover (back to the British) Hong Kong identity, and hopes to collaborate with “bus enthusiasts, students and residents along the route” to create her forthcoming work.

Moe Suzuki is from Tokyo. Her primary medium is photography, and her works often focus on community life, people with disabilities and spirituality. She is self-taught in bookbinding and makes numerous personal projects into hand-bound art books. Her project Sokohi, currently exhibited at Objectifs, also received worldwide recognition as an artist book. In Sokohi, Moe documents her father’s ongoing gradual visual impairment due to progressive glaucoma, seeking to imagine and understand what it means to lose his sight gradually. 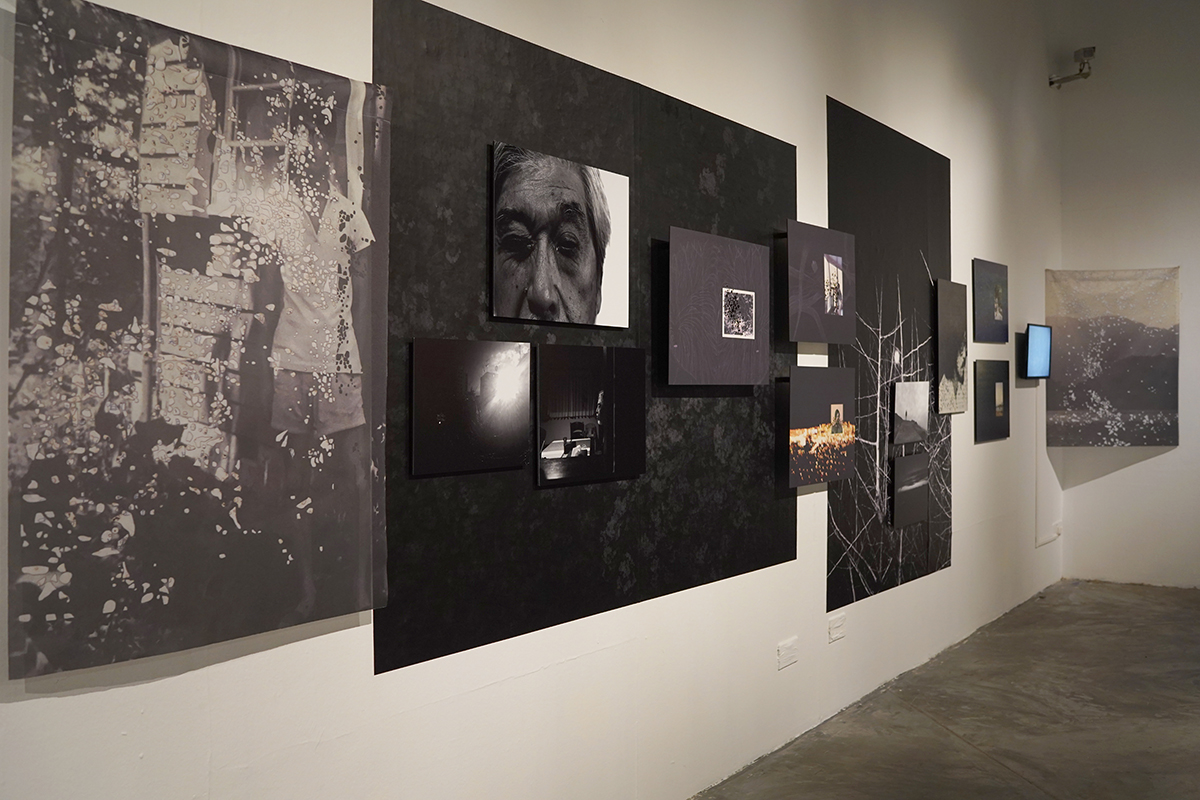 Moe’s early photos documenting her father “came out pretty dark with a sense of confinement”. In retrospect, these reflected their family’s emotionally difficult time when her father sought to come to terms with his new reality. At the same time, he was “pretty open with being photographed”, though he didn’t often realise Moe “was behind or next to him”.

Moe shared: “It felt strange that I was actually looking at him but he didn’t see me at all. It paralleled the wall between us which made it difficult to access his inner world.” So, Moe interviewed her father to understand how his vision had changed and “tried to recreate the visuals according to his testimony.” Her father described “a white layer like lace cotton covering his vision; high contrast between the dark and bright light; and many tiny holes when he tried to focus on an object. As his symptoms progress, he sees a hazy mist but can still make out the outline of objects ”.

Her father gave her a box full of notebooks he had kept from since he was 13, notes from his 30-year career as an editor, and his journals documenting his travels around the world. Moe was saddened by her father so readily giving her the go-ahead to “do whatever [she wanted] with the materials — I knew I wouldn’t have had any chance to open all this while he was alive, if his vision wasn’t going. My father giving up the box highlighted for me how difficult it is for someone who used to be able to see to lose their eyesight.”

Because of the sheer volume of her father’s archives, Moe had to “find certain concepts for selecting images”. She came back to what glaucoma means, and settled on “water, ocean green colour and my father actually seeing or looking at something; the actions he can engage in now”, and his detailed handwritten notes, as core concepts.

Moe reflected: “My father’s archives used to be a tool for him to connect with his old memories and share them with other family members like me. But now, with his declining vision, each of us sees different things through the archives, or he might not see them at all. I felt as if my access to my inherited history has been cut off completely.”

To emphasise this, Moe started making many small holes in her prints with a laser cutter, informed by her father’s description of how he saw. “The holes, though not a completely accurate way to recreate how someone with glaucoma sees, have become the most significant visual expression of my project.”

Moe shared: “You can notice light coming through the holes. Initially I started making these as a sign of loss, but I also noticed the entrance of free light. More recently, my father has learned to type and read using audio features on his laptop and phone. He has also joined peer groups for visually impaired people to share their experiences, and is involved in many activities. He’s active and it seems he has started walking forward into a new world that was opened up by the loss of his sight. On the other hand, I was the one still trapped and who couldn’t let go of my father’s past as a sighted person. I always focused on what he had lost and could not see or do. But with this project I have started accepting how he is now.”

“There is also the eternal question of what it really means to see. Not being able to physically see doesn’t mean that the person is not really seeing anything. My father cannot look back at his archives but it doesn’t mean he’s forgotten the memories they reflect and evoke. After making Sokohi, I realised I was the one obsessed with what I could actually, physically see. But there is much more to see which is not physically visible.”

Women in Film & Photography 2021 runs till 19 Dec, with exhibitions in Objectifs’ Chapel and Lower Galleries, weekly online artist talks, a curator and artist-led tour, and two short film screenings at The Projector. Visit our website for full details and to register / purchase tickets.