Established in 2003, Objectifs is a visual arts space in Singapore that is dedicated to film and photography.

Our goal is to cultivate original voices in visual storytelling, and to inspire and broaden perspectives through the power of images. We do this by presenting a year round programme of exhibitions, screenings, workshops, talks, mentorships and residencies, aimed at fostering dialogue about visual culture, and advancing the practice and appreciation of photography and film. 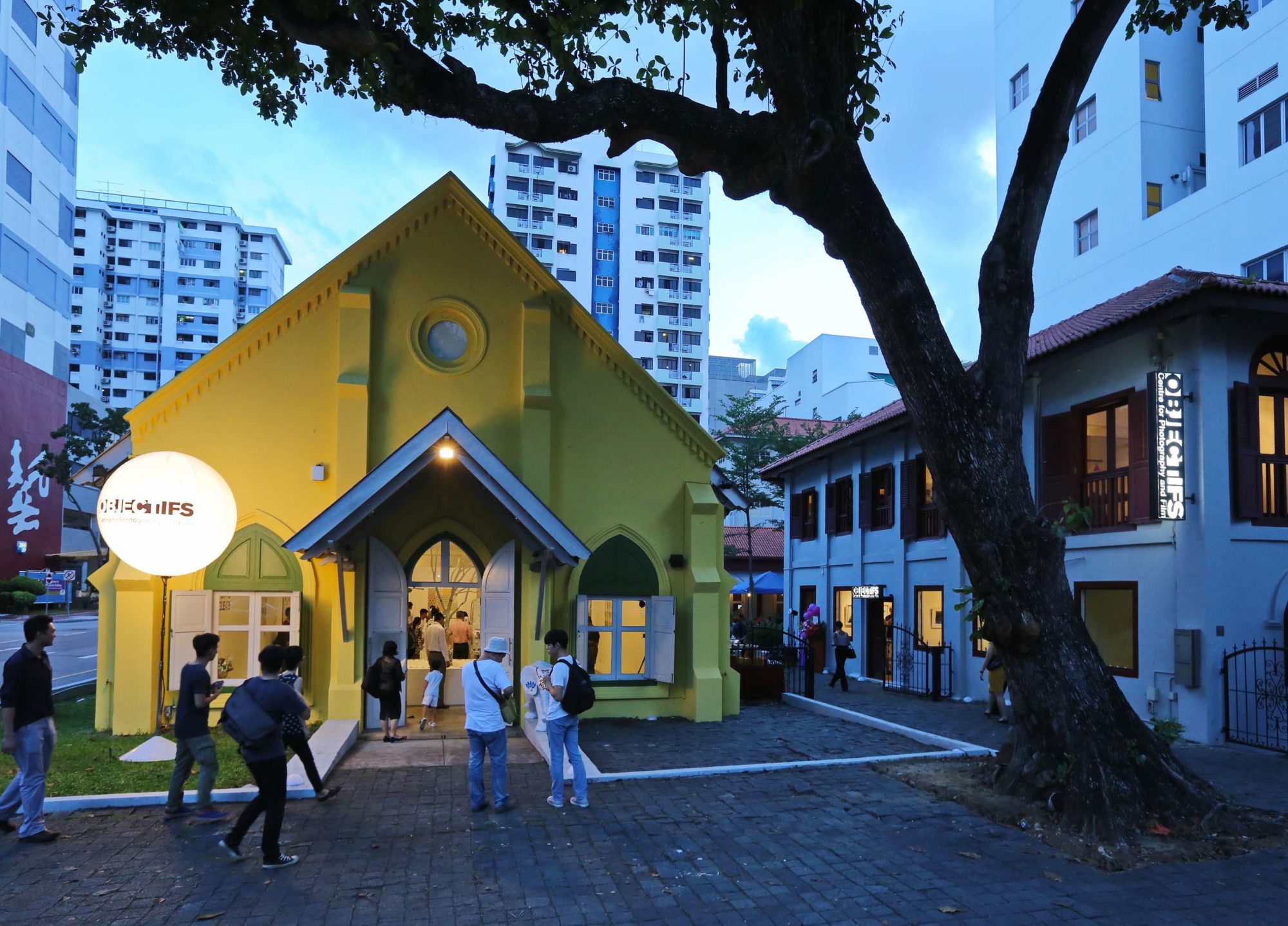 Our key aims for the next 3 years are to:
¤  Nurture through mentorship and education.
¤  Create space for new, vital, critical and underrepresented visual stories.
¤  Encourage experimentation to expand the potential of visual storytelling.
¤  Support artistic networks among Southeast Asian visual storytelling communities.
¤  Grow and enhance our accessibility to a diverse audience.
¤  Provide a range of meaningful experiences to our audience.

Objectifs Centre Ltd is a non-profit registered charity with Institution of Public Character (IPC) status and is supported by the National Arts Council under the Major Company Scheme from 1 April 2022 to 31 March 2025. Our annual report and financial statements can be accessed here. UEN: 201436096K.

Emmeline co-founded Objectifs in 2003 and continues to lead the artistic direction and general management at the non-profit gallery and educational space. Objectifs has become regarded as one of the leading visual arts centres in Southeast Asia. She has been a juror for several international photography awards, including World Press Photo, British Journal of Photography (Female in Focus), W. Eugene Smith Grant for Student Photographers, Lucie Photo Book Prize, and Magnum Foundation Fund, and was a Women Photograph mentor in 2021. She has also curated several exhibitions, with a particular interest in works by women photographers that speak to local and international concerns. Emmeline received her degrees from the University of Pennsylvania in Management (B.Sc Econs, The Wharton School) and Economics (B.A, College of Arts and Sciences).

In addition to overseeing programmes and exhibitions at the centre, Chelsea frequently works directly with artists, photographers, curators and filmmakers across Southeast Asia to develop projects such as exhibitions, talks and mentorships. She is the curator of Stories That Matter, Objectifs’ annual documentary programme, and leads developmental platforms such as the Objectifs Documentary Awards, Curator Open Call and the centre’s residency programmes. She has also led collaborations such as Personally Speaking: The Art of Caregiving, a visual arts project produced for the Lien Foundation. She was previously Marketing Manager at The Substation (2012 to 2015), where she managed the centre’s marketing and communication initiatives. Chelsea graduated from the University of Western Australia with a B.A.(Hons) in Literature and Political Science.

Ryan manages the educational programmes and projects at Objectifs. Ryan has led Objectifs outreach collaborations, such as Picture My World (working with participants recovering from mental illness to use photography as visual therapy) and Singapore Street Scenes with the People’s Association. He previously worked in marketing and arts administration at The Arts House and The Substation where he gained experience in venue management and working with corporate clients. Ryan holds a Masters in Guidance & Counselling from James Cook University. He is a trained counsellor who has also conducted therapy sessions with children to help them express their emotional needs using creative methods.

Puiyee is responsible for the film programme and projects at Objectifs, where she manages programmes such as the Objectifs Short Film Incubator, National Youth Film Awards and Women In Film. She was the programme manager of the Singapore International Film Festival from 2014 to 2019, where she led the Short Films programme and was the co-programmer of the Singapore Panorama section, supporting a community of Southeast Asian filmmakers through these programmes. She has been invited to be on the selection panel of SEAShorts Film Festival in Malaysia (2017 and 2018), Asian Film Archive – Singapore Shorts (2018) and the World Press Photo Digital Storytelling Contest, Long category (2020). She was part of the 2020 Busan International Film Festival Short Films pre-selection team, the 2020-2021 Bangkok ASEAN Film Festival Short Films selection team, and was a Screener for SXSW 2022. Puiyee graduated with a diploma in Arts Management from Lasalle College of the Arts.

Ming Rui manages the educational programmes for school, corporations, as well as the centre workshops at Objectifs. He also oversees other youth initiatives by Objectifs, such as its annual Shooting Home Youth Awards, a mentorship programme for young photographers. He worked previously at the Singapore International Foundation under the programme division, where he managed arts and culture programmes that aim to contribute to positive social change. Ming Rui is an alumnus of Objectifs’ Shooting Home programme and the Angkor Photo Workshops. He holds a BA in Business Management from University of College Dublin.

In addition to managing the operations of the store and logistics, Tiffany is also responsible for the graphic design for Objectifs’ marketing materials and generating content for Objectifs’ social media channels. Since 2021, she has been involved in overseeing Site Unseen, a programme which invites artists and image makers to create site-specific image-based works that are exhibited at the store. She has previously worked at the Singapore International Film Festival in 2016 as the Festival Lounge Assistant, where she managed the festival lounge and coordinated social events. She has also worked at an art gallery as an administrative assistant, overseeing their day-to-day operations and logistics, and managing their social media content. Tiffany graduated from the National University of Singapore with a B.A. (Hons) in Literature and a minor in Film Studies.

Geraldine coordinates Objectifs’ educational programmes and workshops. She provides administrative, planning, and logistical support for the centre’s educational activities. Geraldine was previously an English Literature and Language teacher with the Ministry of Education (MOE), as well as a Literature tutor at Nanyang Technological University (NTU), where she was a recipient of the MOE Teaching Award and NTU Teaching Assistantship Award respectively. She holds a B.A.(Hons) in Literature from NTU, and a post-graduate diploma in education from the National Institute of Education (Singapore).

Dawn Teo / Co-founder and Board Member

Dawn Teo is the Senior Vice President of Amara Hotels and Resorts and Director of Strategic Planning and Corporate Development for Amara Holdings. Amara Holdings is a Singapore-based integrated lifestyle group with businesses in Hotel Investment and Management, Property Investment and Development, and Specialty Restaurants. At Amara, Dawn is responsible for the Hotel Investment and Management division. The group currently owns and operates four hotels in the Asia Pacific region, namely Amara Hotel Singapore, Amara Hotel Bangkok, Amara Sanctuary Resort Sentosa, and Amara Signature Shanghai. She also spearheads the group’s investment and acquisition strategies in the region. Prior to joining Amara, Dawn held senior positions in several multinational banks, and has spent over a decade with UBS AG and Credit Suisse AG. She is a graduate of The Wharton School at the University of Pennsylvania.  Dawn co-founded Objectifs in 2003 and was instrumental in developing its programmes and partnerships. She left the Objectifs in 2005 and continues her advisory role on Objectifs’ Board of Directors. She also serves as a Board Director at SHATEC Institutes.

Wahyuni A. Hadi / Board Member

Yuni Hadi is a film curator and arts manager specializing in the management of film and art projects. She has spent a large part of her career promoting Singapore and Southeast Asian cinema and independent arts. Yuni headed the Singapore International Film Festival in 2009 and later from 2014 to 2019 as its Executive Director. She was formerly Co-director at Objectifs and currently sits on the Board. In 2013, Yuni published the book Behind the Camera and co-produced the film Ilo Ilo. Yuni was a former Programme Manager at The Substation overseeing film, music and literary arts programmes, and was Editor of the magazine Substance. Following that, she served as Commissioning Editor for MediaCorp’s arts channel. Yuni was awarded the Eisenhower Fellowship and the United Technologies Corporation Fellowship in 2016. In 2015, Hadi received the Honorary Award from the Singapore Short Film Awards in recognition for her contribution to the film industry. She was named one of Female Magazine’s 50 Most Inspiring Women in 2010 and recognised as one of the Great Women of Our Time by Women’s Weekly in 2014.

Charmaine Toh received her PhD from the University of Melbourne and is a curator at National Gallery Singapore. Her research primarily looks at modern and contemporary art in Southeast Asia, with a focus on photography. Recent exhibitions include Chua Soo Bin: Truths & Legends, Awakenings: Art in Society in Asia and Siapa Nama Kamu? Art in Singapore from the 19th century till today.  She was formerly the Programme Director at Objectifs till 2014, where she developed exhibitions and educational programmes at the centre. She also founded The Art Incubator Residency Program in 2008, which partnered international arts organizations such as Gertrude Contemporary in Melbourne and Platform 3 in Bandung. She co-curated the 2012 i Light Marina Bay Festival and a curator for LTA’s Art in Transit program and 2013 Singapore Biennale. She was previously Cultural Relations Manager at the Australian High Commission from 2006-2009, where she worked on international projects promoting cultural exchange.

Yvonne Li is the co-founder and Director of Tate Anzur, an independent strategic communications agency in Singapore that is dedicated to telling great stories, through genuine engagement, from the ground up. For the past seven years, she has been leading her team to provide strategic counsel and creative communication solutions for her clients across the arts and heritage, public affairs, lifestyle and corporate sectors. They include National Gallery Singapore, National Heritage Board, Google Singapore, Aēsop, Singapore International Film Festival and more. Prior to her current role, she spent four years at Hill & Knowlton and has also held at in-house positions at the Ministry of Defence and Fraser and Neave.