Recap: How to Tell a Story through Film Editing

Recap: How to Tell a Story through Film Editing

By Mary Stephen for the Objectifs Short Film Forum 2021

The Short Film Forum, part of the Objectifs Short Film Incubator 2021, saw film-makers and film-lovers from all over Southeast Asia tune in to a packed weekend of free online lectures and panel discussions by international industry experts. Read on for a recap of film editor, producer, advisor and composer Mary Stephen’s lecture on “How to Tell a Story through Film Editing”.

Mary Stephen has been working in narrative film and documentary for several decades as an editor, producer, advisor and even composer and has been nominated for prestigious awards including the Golden Horse Award, the Hong Kong Film Awards, the Independent Eye Award and the Turkish Film Awards. She is also a tutor / mentor in various production initiatives such as Cinema College of the Venice Biennale, A.N.D. (Asian Network of Documentary) in Busan and Yamagata Documentary Dojo and has been a jury member at festivals including Locarno, Singapore and Kerala. She is a member of the Academy of Motion Picture Arts and Sciences. In 2018, she was bestowed the title of Knight of the Order of Arts and Letters (Chevalier dans l’Ordre des Arts et des Lettres) by the French Ministry of Culture. 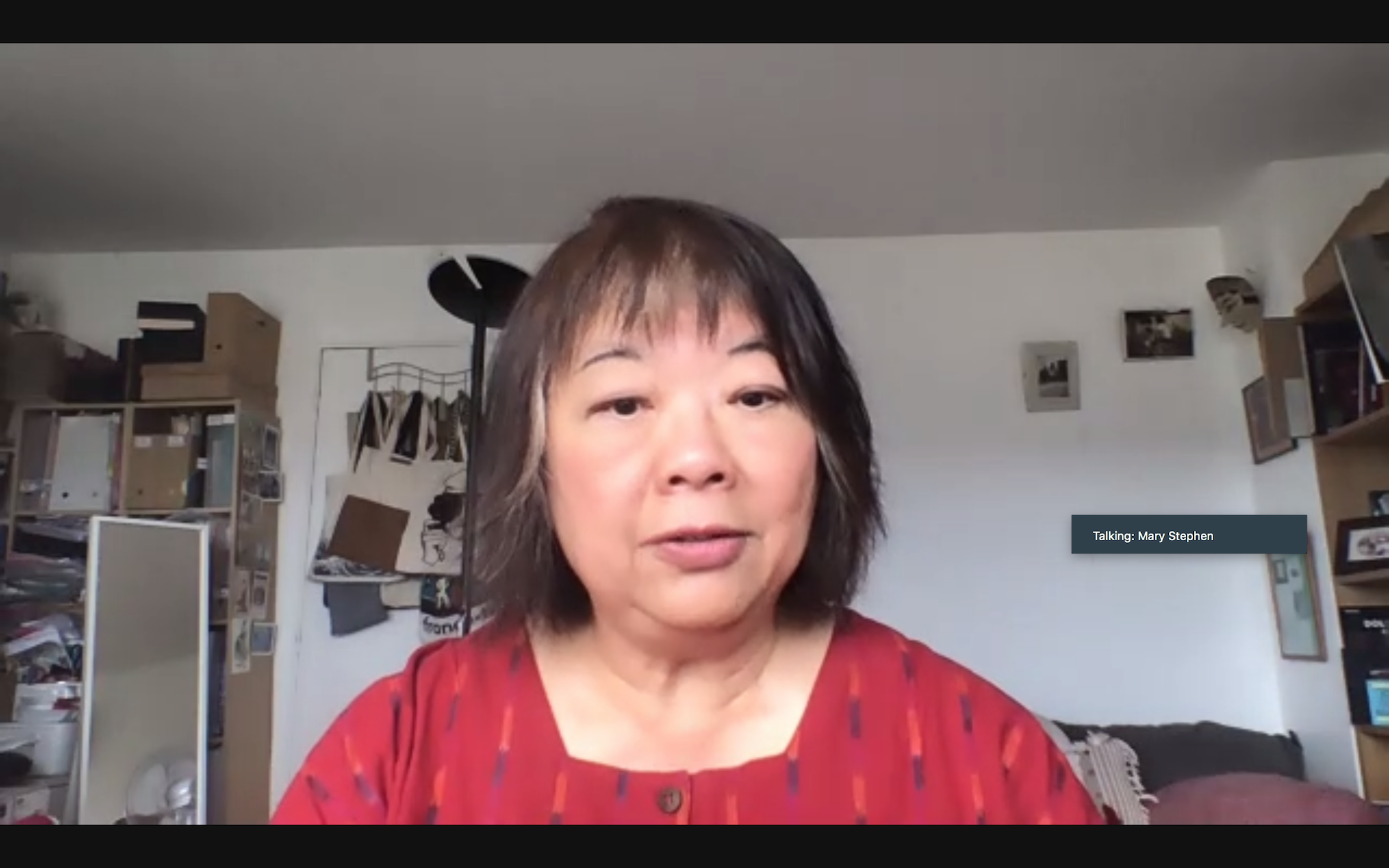 Mary Stephen shares insights from her decades of experience as a film editor.

Mary Stephen is well known as the late French New Wave filmmaker Éric Rohmer’s film editor but has actually spent the last 15 years working with young independent filmmakers, mostly on their first and second films, in addition to working with established filmmakers like Ann Hui and Adam Wong from Hong Kong. Having worked in many countries, she has found that “though stories and emotions can be universal, our emotional language differs from one culture to another.”

With this in mind, Mary does not strictly abide by filmic conventions like a three act structure and advises young filmmakers that “the most important thing is to find your own voice, style, your own way and your own rhythm. We may have a different rhythm in Asia and shouldn’t just imitate the rhythm of Western cinema”. Mary also advises filmmakers against editing to the rhythm that they perceive a certain festival may prefer. “Every film has its rhythm. It’s important to find the right way to tell the story.”

According to Mary, “one of the biggest mistakes is insufficient preparation”. She encourages “work[ing] your script again and again, and leave time in between drafts because you will get saturated. You will have new ideas when you set it aside [and return to it].”

Mary also advises allowing enough time to “see and feel the locations — have you experienced the space? You have to figure out how to move the actors’ bodies across the space to make an emotional impact. You need time to communicate with your key team members: breaking shots down with the DP [Director of Photography], what kinds of sound you want with the soundman. You need to discuss with your production manager how many people you want to limit your on-location crew to.”

“All this is essential to think through before filming, especially before shooting a short film, because you have limited time and budget, and have to establish the characters, define your protagonist’s characteristics, situate the story, develop the mood and give a sense of place all in a very short time”.

Mary gets involved with projects from the script stage and believes having an editor onboard early is not just a luxury, but essential, even for indie filmmakers with a tight budget. “Quite often, the director is editing their own film. But it’s important to have a fresh pair of experienced eyes to offer insight and inspiration. There are many things that can be improved or thought about much more before you actually start shooting. If these elements are not there, no matter how much of a miracle worker your editor is, there is not much we can do.”

In response to an audience member’s question on what can be done after the shoot and before editing to remedy the situation of a director not being able to involve an editor at the pre-production stage, Mary advised: “Prepare your shooting script with the DP as much as possible to be able to have enough material. On the other hand, don’t shoot all over the place. When shooting digital today, people tend to come back with footage of coverage from every possible angle, which is also not the way to do it. Instead, start thinking how you want to put together the film.

“If you are prepared enough, you will have enough peace of mind and confidence to let in the “happy accident” — things that are not in your plan, but become part of the film.”

Despite being a veteran editor, Mary finds each new film she edits a learning experience. She prefers to work alone and “cannot work with a director or even an assistant in the [editing] room”, but “there are some editors who need a sort of ping-pong exchange constantly with the director next to them.”

She emphasised that “it’s not a matter of finding the best technical editor but is more like finding your partner. Some sort of conflict or differences are actually very good, and healthy, because if you both think exactly the same way it’s useless to be working together.”

“Directors, no matter how experienced, really want [the editor] to surprise them. It’s not about age or experience but about always bringing something new to a project. Bring a childlike mind, be open.”

An audience member asked how Mary decides what editing style to use and whether she decides independently or or with the director, and whether they decide before or after watching everything. Mary shared: “We discuss it of course but not in a very theoretical way; we don’t say, I’m going to use the French New Wave style. It’s a matter of feeling. I don’t really work any more with directors that I don’t know. So we have kind of become friends and know more or less what it is that we want.”

“A lot of the time, it’s the material that inspires me and gives me a feeling. It depends also on whether the director can accept it or not. But so far, nobody has refused it. Everybody has something to contribute. Even an established director is looking for something that they haven’t seen before.”

In response to an audience member’s question about how Mary starts editing a film, she shared that for fiction films, she always starts with the script, “using a big felt pen to put arrows showing which scene should go where”. Especially with more established directors, she also has conversations with them about “what kind of added meaning there might be by changing the order of things”.

Reiterating what she emphasised on during her seminar Editing for Documentary and Fiction held at Objectifs in 2016, Mary’s “three commandments” for filmmakers to improve at their craft are as follows:

Mary made reference to works she has edited to illustrate certain editing techniques. While the clips are not available to view due to copyright restrictions, the takeaways are briefly summarised below:

Responding to an audience member’s question about how editors work alongside film scorers and composers, Mary shared that “it depends on the film. The editors may put down their intentions by putting in guide tracks, suggestions that we test when editing, before it goes to composers, to give them a sense of our preferences and decisions. Of course, the composers will have their own ideas too.”

8. Editing films in a language one does not speak: “For fiction films, I start with the script to follow what is being said. I trust that if I see a bad performance or something that doesn’t work for me, it is the same in any language. For the fine points of a dialogue I will have to work with the director. I’ve been told I cut the dialogue quite well because I’m listening to [the intonations], the way that the sentence would end, etc. I have to trust the director will inform me if it’s okay. Sometimes I also feel it’s not okay, and ask whether it’s right. All this has a lot to do with training your ears.”

Mary made a short film titled The Memory of Water as part of an omnibus celebrating the anniversary of a university in Hong Kong. She shared what she learnt from the mistakes she made:

Mary explained why she made a second version of the film: “The whole thing happens in a classroom. It is the story of a teacher showing some films. It starts in a dark classroom. The whole opening scene is dark; you can’t see her, you can’t see anybody. Is that a good way to start a short film? For two years I was kicking myself for that.”

“I didn’t work enough on the script to realise that. With the second cut, I started in the city. I used the technique I mentioned of situating the story, of showing right away that the protagonist is a stranger in her own hometown.” Mary’s mistake drove home the importance of her message that “if you haven’t done your homework in the script stage, there’s only so much you can do to save it in the editing stage.

Echoing what filmmaker Carlo Francisco Manatad suggested in his talk about paying attention to and looking closely at one’s surroundings, Mary also recommended: “As you go on your daily routines, errands, on the same path daily, take three pictures. The point is that you will be looking at something you see every day, with fresh eyes.

The second exercise is to document the soundscape of a place for 30 to 60 seconds. When you return home, listen to the sound and dissect every sound in the clip. You will realise what you think of as silence as just city sound actually has so many layers. When I’m editing I’m setting the sound intentions as well even though the sound editor will come in later and interpret my intentions. Especially with Eric Rohmer, we liked to put in every layer of sound – every dog, every bird. It is a composition. If you don’t hear these sounds in your daily life you wouldn’t know what to do to put them in.”

Mary’s recommendations for “classic editors’ films” include Elephant by Gus Van Sant (who also edited it), The Hours by Stephen Daldry (whose editing by Peter Boyle was nominated for numerous awards and even deemed “a minor film miracle”; read more in this interview with Boyle), and big classics by Orson Welles.

She concluded her lecture with these encouraging words for audience members who asked how she sustains her energy during the laborious process of film editing:

“It’s true, you can get saturated with a film. You have to take a break from it. It’s important to keep a distance and not get too absorbed in the film. Sometimes it comes back to the question of budget and of time. There’s never enough time or budget for editing and sound design. It’s a matter of negotiating that, of making sure you can actually stay away from it for a day or two or a week and then come back to it.”