Women in Film 2018: Collective Power came to a close on Sat 13 Oct with the screening of A Better Man by Canadian filmmakers Attiya Khan and Lawrence Jackman. This documentary sees Khan reconnect with her ex-boyfriend Steve, whose abuse she fled 22 years ago.

The film was followed by a post-screening discussion with filmmaker Jasmine Ng and Laura Meehan, a Women’s Care Centre Executive from AWARE Singapore, . [Read more about the film and about them here.] Read on for selected highlights from their discussion. Their responses have been paraphrased for brevity.

First impressions on the film

Laura: This is a powerful film exploring themes of violence and abuse, what justice means for survivors, and healing. What struck me most was how young Attiya and Steve were at the time of their relationship — she was 16, he was 18 — and “how normal they are” externally, in their appearance, their behaviour, their interactions. I was also struck by what she shared on how the violence impacted her outside of their home. For example, she says she “didn’t dare to look up” even in the hallways of her school. I’m also keeping in mind that ultimately, her decision to reconnect with Steve is a very personal act.

Jasmine: This is an extraordinary, small and powerful film. Only the two of them could have made this film, we can’t use it as a template for restorative justice. Attiya has also worked as a counsellor but I don’t know if any amount of training could exactly prepare you for this. Even as a filmmaker, she ensures their interactions replicate the consent and respect of a healthy relationship.

Technically, from a filmmaking craft point of view, the camera gives them a lot of space, it’s very zoomed out. The conversation is essentially between the two of them. 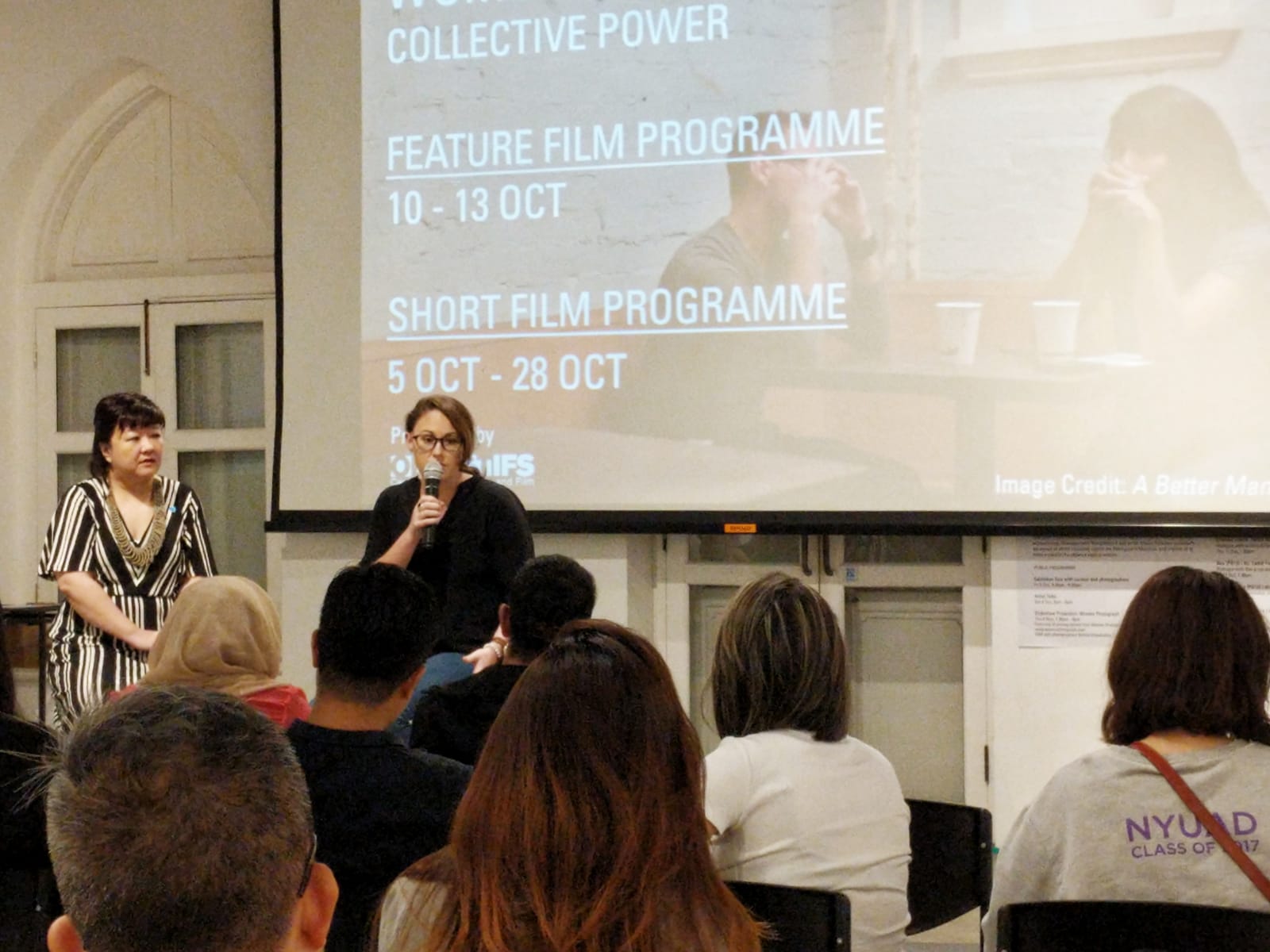 Laura: Peer support is really important in situations of intimate partner violence. We see in the film the idea of seeing someone in distress but not doing anything about it, like when Steve shares that a teacher in their high school knew what was going on. We should check in on each other, we all have a responsibility to care for each other. Attiya talks about the importance of being listened to, heard, because within her relationship she was just not being heard.

Jasmine: There’s an idea called “ring the bell”, which is about letting people know you’ve noticed something is going on, as for example, Attiya’s friend Seth and her guidance counselor, did. Someone stepping in can mean a lot to the person experiencing it.

People have the concern whether stepping in will make matters worse, but trying does matter. You can speak to the person experiencing the abuse rather than the perpetrator. It’s ultimately down to each person’s comfort level how they engage. For example, if I see a confrontation on the street, I may approach the victim, to at least ask if they need help, and they can say yes or no. At least I am acknowledging I see something happening to them.

We all have a responsibility to one another… And for victims to know that someone cares, or for us to show care to the person. If one person is hurt, it’s a blemish on all of us. It is not just a woman’s problem. It is a problem for society.

On #MeToo, #TimesUp and closure

Jasmine: There’s been more talk around criminal vs. restorative justice lately, and the #MeToo and #TimesUp collective movements and some past perpetrators have the thought they should be waiting out the statute before apologising, if they want to make amends.

Laura: For Attiya, making A Better Man is part of her healing, and Steve says it’s healing him too.

Jasmine: With documentaries, a common question is “When do you end the film?” I got the sense Attiya wouldn’t have chased Steve if he wasn’t ready or present. She doesn’t push for a “golden ending”, but does it on her own terms. She celebrates the anniversary of her leaving Steve each year, with her family and friends.

These are three organisations in Singapore dealing with domestic / intimate partner violence issues. Please refer to their websites for more resources and contact information:

Read our recap of earlier post-screening discussions held as part of Women in Film 2018.