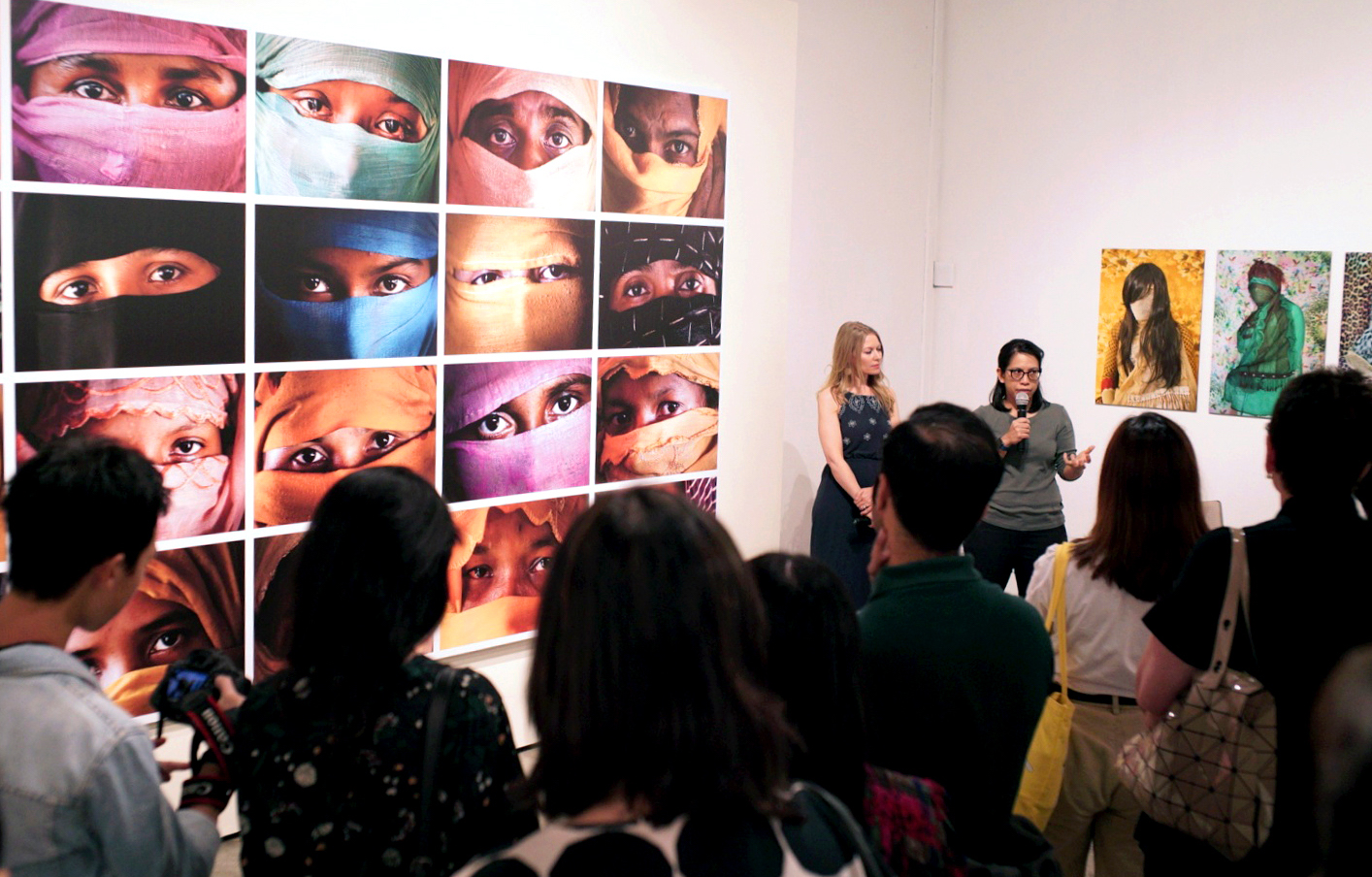 Kristen Gelineau and Wong Maye-E presenting "All I Have Left Are My Words".
RecapsNEWS

The exhibiting artists on Collective Power

Objectifs’ fourth Women in Photography exhibition opened on 4 Oct 2018 with the theme Collective Power, building on the #MeToo and #TimesUp collective movements which gained momentum globally in the past year.

Four of the six featured photographers — Izumi Miyazaki, Haley Morris-Cafiero, Habiba Nowrose and Wong Maye-E, and journalist Kristen Gelineau (Maye-E’s collaborator for the investigative piece) were in attendance. Read on for a recap from their artist talks. 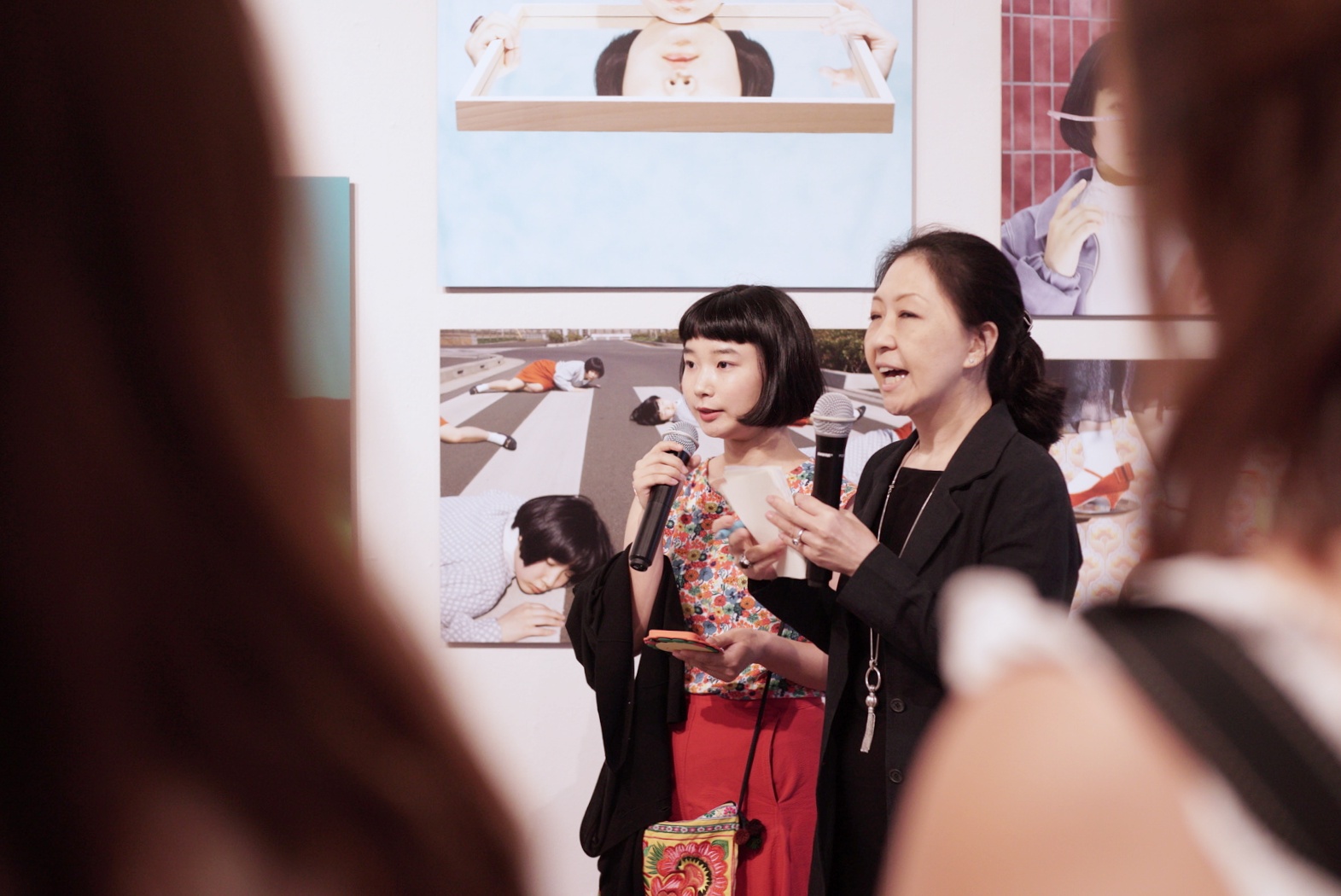 Izumi Miyazaki’s fascination with television commercials and ads since childhood led her to study Imaging Arts at university. She cited three personal reasons for her interest in self-portraiture, which included: “As long as you and the camera are there, you can shoot anywhere, anytime, ”, “The creator and model are you, so there’s no need to compromise, ” and “There’s no need to spend so much money.”

Her early self-portraits were more straightforward, and were shot around her neighbourhood, which she thought of as her studio. Her lecturers encouraged to share her images via Tumblr, and her work began receiving attention. She shared:

“When I make a self-portrait, I feel that I have two ‘me’s inside. The first is the negative me, who has an inferiority complex and compares myself to friends and relatives. I thought these feelings would fade as I matured but they haven’t. I am still conscious of how women should behave in society. With the continuing influence of people surrounding me as well as the mass media, it is difficult to erase these negative feelings completely.

The second me is the positive me. I keep making self-portraits in order to encourage and affirm myself. I can be a heroine, I won’t be compared with anybody. I can show myself in the context of how society thinks about women. Even to my own eyes, I look good.”

As Izumi continued with self-portraiture, she started to use Photoshop more. She doubles or multiplies herself in some images: “born as an only child, I believe a second me would understand me most,” she shared. Food features frequently in her works, as do more serious themes like death, which she “twists into something more comical to lighten the feeling”.

After six years, Izumi feels like self-portraits are “like a diary, recording both the changes inside and outside me. Of course you can recognise your own features in a past image, but you can also recall how you felt at the time”. While she will continue with selfportrait until she “gets tired of it”, she now also gets business offers from clients like hair salons and enjoys collaborating with hairstylists and stylists. “It is interesting and fun to work with others now, and I’d like to do more,” she said. 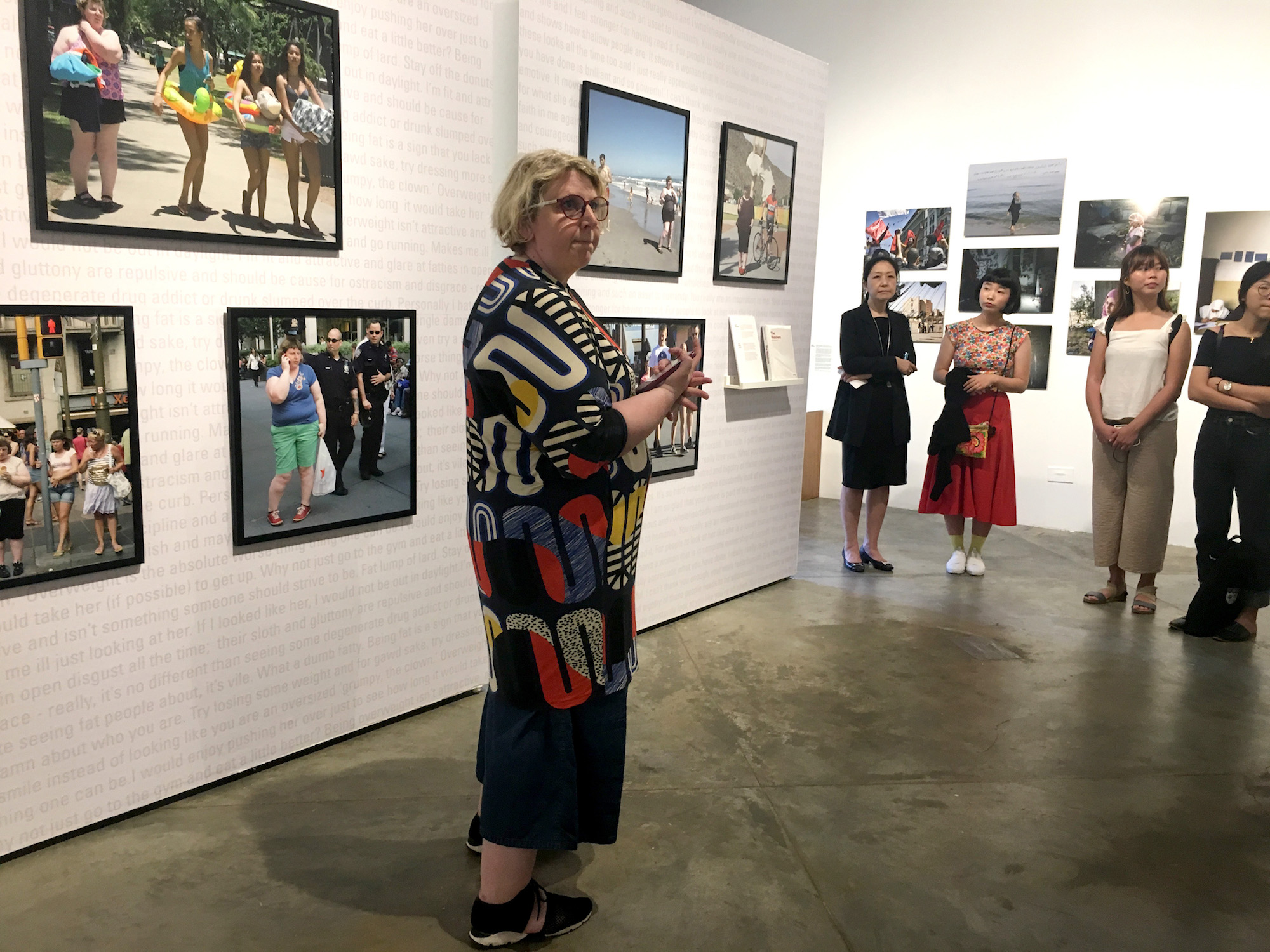 Haley Morris-Cafiero addressed the following question in her talk: How do I harness power in my artistic practice? In short, she does so with her “ability to make the viewer change the world or their view”. While trained in photography, it was almost only in hindsight that Haley realised how her work is informed by performance artists from the 1970s who “activate the room, or the viewer”.

In her art school MFA thesis show, Haley presented Shape to Fit, ­­a “series of daguerreotypes [documenting] her struggle to lose weight to fit into a public bathroom stall”. Her next series, Something to Weigh (2010), documented her experiences in public social situations, such as going to restaurants, which were complicated by the fact that “eating keeps [her] from losing weight, or adds weight”.

Wait Watchers (2010 – 2015), the body of work presented in Objectifs’ Women in Photography 2018 Exhibition, got started when Haley processed a roll of film and noticed that in two self-portraits, strangers in the background appeared to be smirking at her. It led her to contemplate how a “moment in time” can be so telling, yet actually not reveal anything definite. She said: “We start analysing, building a story around a momentary glance.” She sees herself as “a stand-in for someone who doesn’t fit into society”.

Wait Watchers went viral in 2013 after it was first featured on Lenscratch. It has since been featured on various platforms and interest in the project continues. The work was published in a book, titled The Watchers (2015) (A browsing copy is available at our exhibition.)

Unsurprisingly, among the responses to Wait Watchers were rude and hateful comments from trolls — not all of whom were as anonymous as they perhaps thought they were. Haley began to save selected comments. She says her favourite to date is one describing her as a “pillowcase full of doorknobs”.

Haley is interested in the “limits of harassment” and how people are inadvertently revealing a great deal of personal information through the comments they leave online. This has led to her current project, The Bully Pulpit (2017). Of this new series, Haley said: “I want this to be performative, pushing social boundaries. I use humour as a device to break down negativity.” 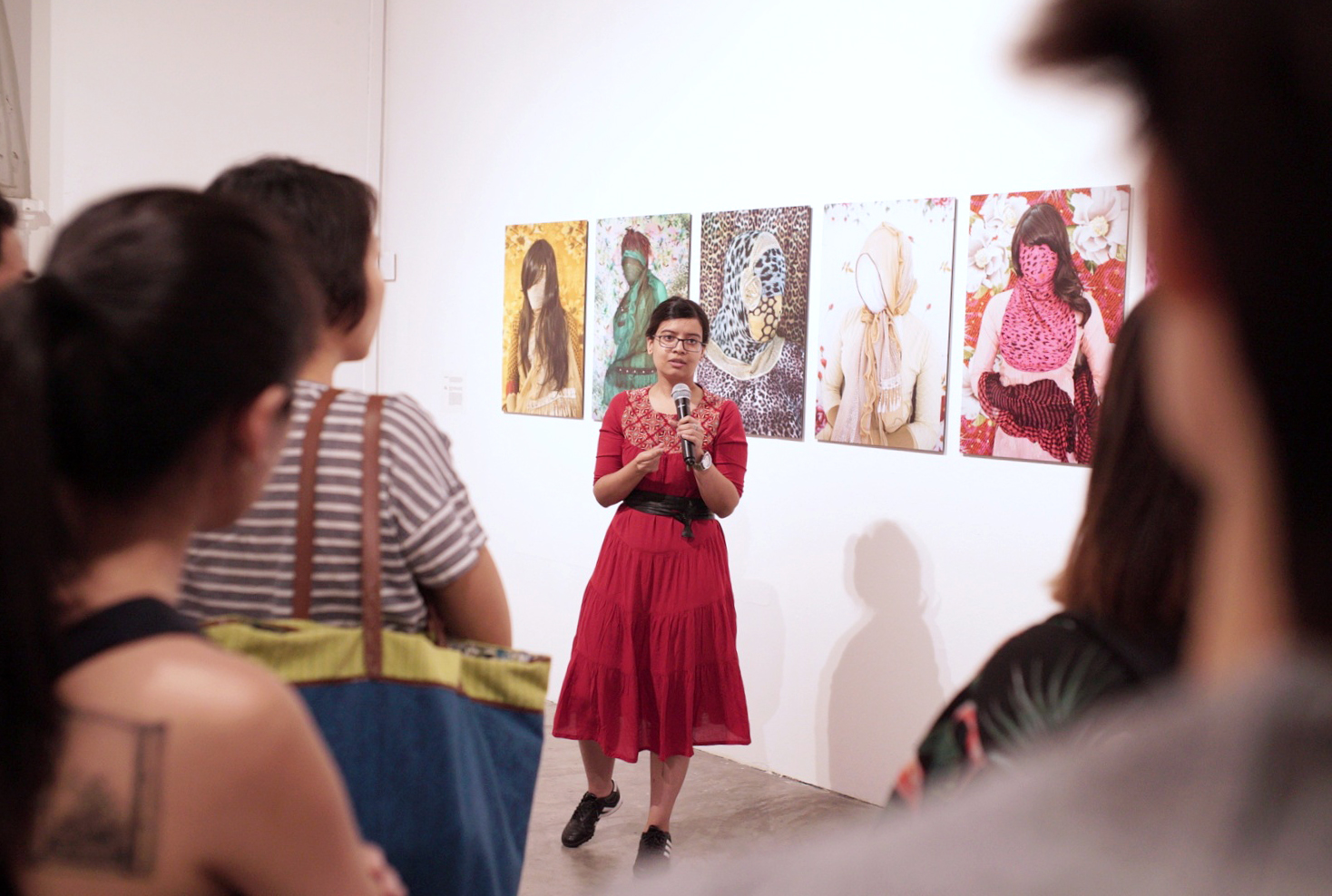 Habiba Nowrose started her series Concealed in 2014, primarily motivated by her longtime fascination with a type of fabric widely produced in Bangladesh and which is frequently used by local people.

In Bangladesh, it is customary to give gifts of clothing to family helpers and domestic workers during the two annual Eid celebrations (more commonly known as Hari Raya Puasa and Hari Raya Haji in Singapore). Habiba recalls from her childhood family conversations that the fabrics they had selected would not be to the household helpers’ tastes. This got her interested in the “aesthetics of the lower middle and middle class”.

Habiba has a background in women and gender studies, and through the Concealed series is responding to societal pressures (which she also faces) on women to settle down into professions that aren’t “running around doing photography and videography”, and to marry and have children. She notes that many women in Bangladesh, including some of her peers, change themselves and lose their individuality in satisfying the expectations of their family. She was also deeply moved by a divorced female friend’s suicide. This is why the portraits in Concealed are “faceless”.

Habiba described her process as “psychological and intuitive”. For the backdrops in her portraits, she purchases cheap, rejected fabrics from local markets. She said: “A piece of fabric can motivate me to think of a character from my imagination. Or, it brings to mind someone I’ve seen before. From there, I develop the character further.”

She shared that initially, her relationship with her sitters was very much one where she guided them on what to do, and they followed instructions. “In the beginning, some of them struggled to understand what I was trying to do. But later, and through conversation, they came to understand.”

Kristen Gelineau and Wong Maye-E presenting “All I Have Left Are My Words”.

Wong Maye-E is a photojournalist and Kristen Gelineau is a journalist with wire agency, Associated Press. They worked together on the series All I Have Left Are My Words, about the systematic sexual assault of Rohingya women by Myanmar’s military.

They made two visits to Rohingya refugee camps in Bangladesh to first speak with the women affected, and later to interview those who became pregnant from the rapes. They worked with translators and fixers, spending extended hours with families and the women in their tents, to ensure their privacy and to be sensitive to how the stories unfolded,

Maye-E shared some of the challenges she faced in photographing the Rohingya women. For her, “you always see photos of the Rohingya taken in a certain way. How was I to ‘think up pictures of women experiencing assault? Under tough physical, material and emotional conditions, how do I shoot what’s not there, after the fact?” She shared that it is common for the media to use pixelated images, or shoot silhouettes or hands in such cases. However, she felt these “become unidentifiable, another statistic. I wanted to humanise them.”

To achieve a sense of visual consistency, Maye-E decided to shoot each woman’s eyes. “They are looking straight at you, it’s confrontational. I wanted to make the viewer feel the discomfort.” Working in very dark conditions (there is very little light in the refugees’ tents and shelters), she used a wide-angled lens for the portraits.

Though both Maye-E and Kristen have worked in many difficult environments in the course of their careers, they described this as one of the most physically and emotionally challenging assignments. The physical conditions could be managed. However, the ethical and emotional aspects were harder to reckon with.

They shared that there were times when it was tempting to hand over a small amount of money to the Rohingya women to help alleviate some of their struggles. However, they refrained from doing so strictly, as even one such well-intentioned gesture would compromise the journalistic integrity of their project; they might have been seen as exchanging money for information.

Maye-E and Kristen also faced understandable challenges in having the Rohingya women open up to speak about the terrible violence they had experienced. In addition to the emotional toll, they faced stigma from various avenues: children as young as 13 were raped; those who became pregnant from the assaults were deemed to have tarnished their families’ reputations for pregnancy outside of marriage, and especially as the newborns would be the children of ‘non-believers’ (the Rohingya are Muslim while the Myanmar military men are Buddhist).

Some women were willing to speak, but the men in their families who were deemed authority figures, did not give their permission. The reporting team took the time to build trust with them, or found alternate ways to photograph the women. The confidentiality and safety of the women remained the priority throughout the process, and often, they would spend the time to learn more about the women’s lives before the attacks or to grief with them. Maye-E stressed,

“We had to strike a balance and reminded ourselves to be people first and journalists second.”

On the situation for the Rohingya community, Maye-E said: “When we made our second visit, some had a more desperate tone as time had passed and their circumstances were still difficult.

The crisis still continues for the Rohingya community. If you wish to find out how you can help, Charity Watch provides a list of charities (rated for transparency, financial efficiency etc) that support different international efforts.

Women in Photography: Collective Power continues at Objectifs till 18 Nov. Also join us next Thurs 8 Nov for an evening slideshow projection of works by 22 members of Women Photograph, followed by a discussion with Singaporean photographers Amrita Chandradas, Charmaine Poh and Ore Huiying.

Recaps of the post-screening discussions held each night for Women in Film: Collective Power are also available on our website. 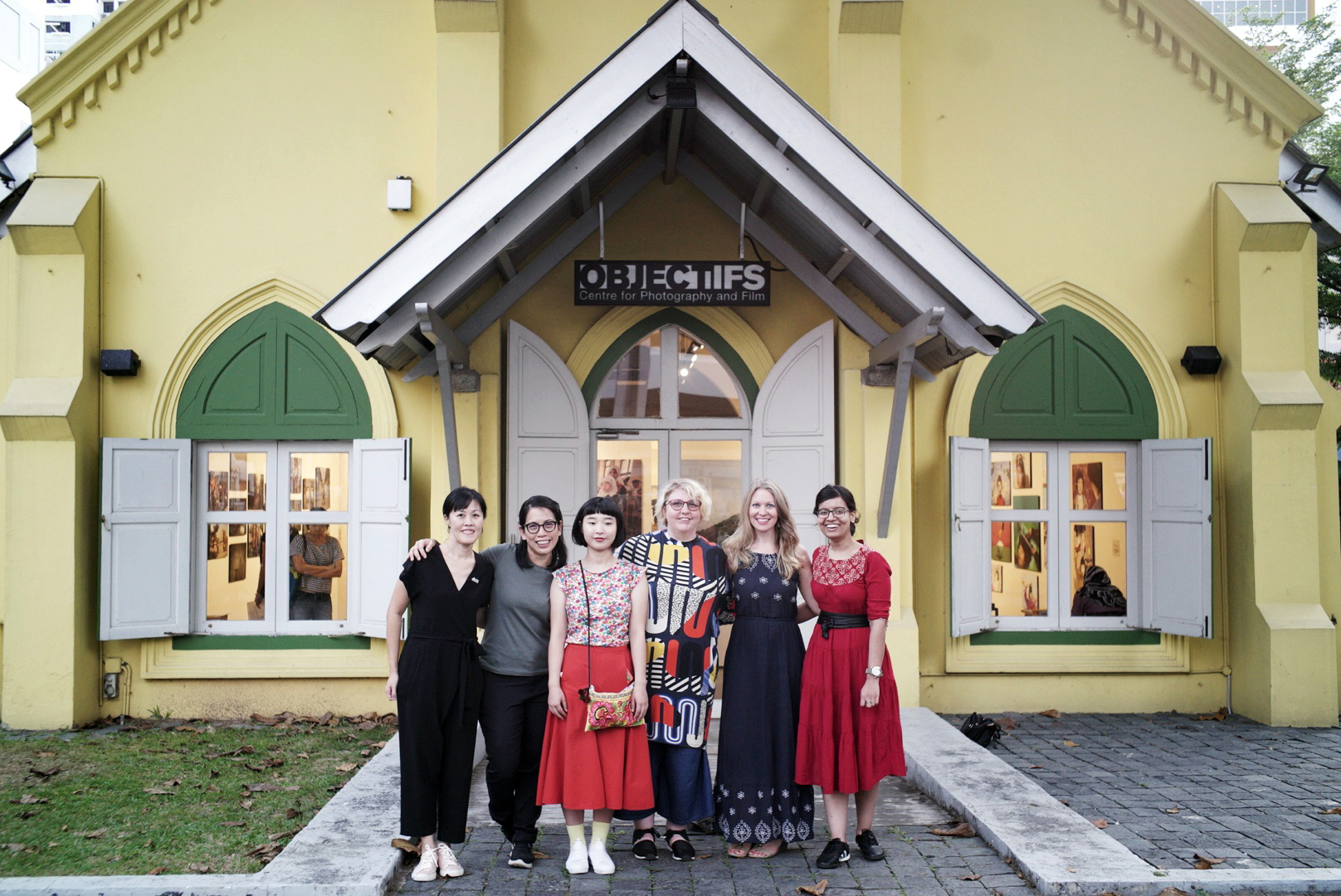