STORIES THAT MATTER: ISLAND OF THE HUNGRY GHOSTS

STORIES THAT MATTER: ISLAND OF THE HUNGRY GHOSTS

Stories That Matter 2019: Myths‘s documentary screenings continued at Objectifs with a screening of Island of the Hungry Ghosts, directed by Gabrielle Brady.

The film was followed by a post-screening discussion with artists Nurul Huda Rashid and Kin Chui. [Read more about the film and about them here.] Read on for selected highlights from their discussion. Their responses have been paraphrased for brevity.

On the challenges of discussing this film and the issues it touches on:

Nurul Huda: The first time we watched this film, we were wondering how we’d start a conversation about it. It carves out a lot from deep within you. Even to use the word “discuss” is problematic, because how do you structure this?

Kin: It’s a very heavy film… I was also just thinking how amazing the opening scenes were. As the film slowly unfolds, you get the feeling you just want to scream, in the face of bureaucracy, indeterminate actors. it involves unpacking a huge subject matter that is quite removed from our immediate surroundings. How do we even talk about notions of migration, of refugees, of seeking refuge?

On the film’s juxtapositions of structures and bodies, and the body as protest:

Nurul: This film explores a very large issue. To put a label on every type of movement and call it migration is itself problematic, essentialist. It creates a lot of archetypal bodies, such as refugees, migrant workers, expats, transient workers, the whole notion of foreigners, nationalism, borders.

One of the beautiful things I liked about this film is that it actually managed to avoid essentialising migration by not showing mass movement of bodies. I don’t think we need another film showing that as spectacle. Rather it shows us problems with structures that prohibit migration.

Kin: One of the questions that was plaguing me watching this film is the notion of movement, which is depicted by the movement of crabs across a road that is a human intervention. It troubled me that in relation to bureaucracy. Is there no possibility to have things move simultaneously, is it always an either / or situation? When we think about notions of migration, what bodies are limited from moving while others have the ability to? 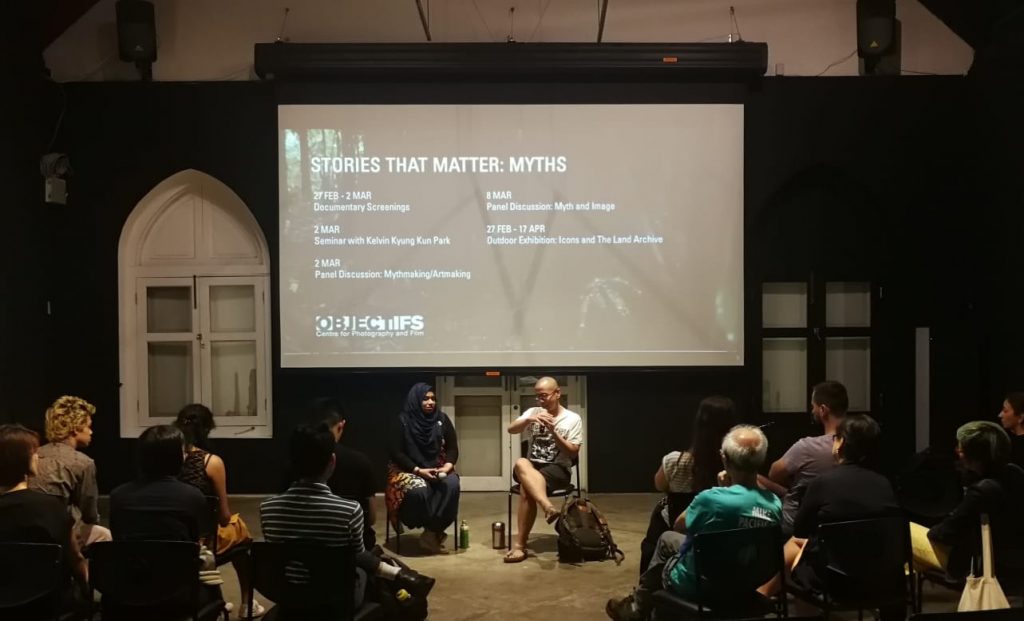 Post-screening discussion with artists Nurul Huda Rashid (L) and Kin Chui (R) after the screening of “Island of the Hungry Ghosts” by Gabrielle Brady.

Nurul: We have superstructures that give us dogmatic ideas about how to control, tame, detain people. At the same time, there are people who say you know what, we need to move. There was an account of a man who sewed his lips in protest. That also becomes a form of testimony. The only way you can protest is with your body. It’s again the juxtaposition of structure vs. body, and whenever you have structure vs body, it is automatically in imbalance in power. It’s the same thing with car tyres on roads where there are crabs. That is itself a powerful enough message.

It’s hard to explain how I feel watching it, which is also important. Sometimes there is no need to explain. In academia, activism, research, it is important for people to have the vernacular to explain and put things into policy but sometimes silence is also enough: listening to someone speak, watching crabs move, is also enough to create that connection we have to particular issues.

Nurul: That goes hand in hand with the myth of films. We watch a film like this and know we are now aware of what is happening. We have the privilege of finishing the film and then walking out. For me, the idea of sustainability is what happens after the film. I’m not trying to say that everyone has to become an advocate or an activist, it’s about trying to root yourself in relation to what the lessons, aspects, emotions we can carry forth into our everyday lives? There are no refugees in Singapore because there is “no space” for us to host them, we do not have enough “resources”.

When we talk about refugees, in Singapore, we’re talking about othered refugees from other countries, but watching this film, I can hear those stories in some of our migrant workers, in some of our minority groups like people of colour, supposed deviant sex workers’ lived experiences as well.

So a lot of times when we talk about our roles as audiences and as human beings upon the ending of a film or a particular conversation, sustaining it means thinking about how we can identify the roots of injustices or problems in our own everyday.

Stories That Matter: Screenings continues till Sat 2 Mar with two more documentary films, each followed by a post-screening discussion. Tickets are available online or at the door. SNAKESKIN will play tonight with the filmmaker Daniel Hui in attendance. Join us too for a seminar with artists Loo Zihan, Zarina Muhammad, Daniel Hui and Nurul Huda Rashid on Myth-making / Art-making at 430pm to 6pm.