Stories That Matter 2019: Myths‘s documentary screenings continued at Objectifs with a screening of Army, directed by Kelvin Kyung Kun Park.

The South Korean filmmaker and artist was in attendance for the Singapore premiere of his film, and participated in a post-screening discussion with Loo Zihan. [Read more about the film and about them here.] Read on for selected highlights from their discussion. Their responses have been paraphrased for brevity.

Zihan: I noticed there is a dedication right at the very end of the film that says it’s dedicated to Minsu Lee, and all who lost their lives during their service. Could you elaborate on your relationship to Minsu and why you chose to dedicate the film to him?

Kelvin: Minsu is my cousin who lost his life at a young age inside the military. We suspect it may have been a suicide but it’s not so clear. Officially, the #1 cause of death inside the South Korean military is suicide. I just wanted to pay my respects to those who lost their lives.

Zihan: When I first watched the film, its pertinence and relevance to the Singaporean context really struck me, especially because of what has been happening over the past few months. There’s the case of Aloysius Pang, a TV celebrity who lost his life during reservist training, and a work by artist and designer duo ZZ which makes a statement about mortality rates in the Singapore army[…] It was difficult to find transparent articles online about military deaths.

Zihan: How is (the subject of the film) Woochul now? What’s the impact this film has had on his life after the military? What is your relationship with him now?

Kelvin: Woochul has finished his service. Now he is trying out different jobs, going to job interviews. He’s OK now. We became very close during the shoot because he went through a very hard time, and I was talking to him on the phone and encouraging him. I have very good relations with his parents, they’re actually very thankful to me that we had that relationship. That was something that gave him strength.

Zihan: The presence of the camera is like a surveillance device to keep him in check in a way.

Kelvin: It was a double edged sword where his peers could make fun of him but they couldn’t really touch him.

Audience Member: When the topic of depression sets in, I was worried as an audience member and really hoping the ending wasn’t going to be a sad one. As a filmmaker were you worried where your film might eventually end up? Obviously, you have an obligation to show the truth.

Kelvin: Obviously I was very worried about Woochul because he was going through a very difficult time. Actually, the way Woochul explains it, the military experience wasn’t really all bad. It was a mix, a lot of greys.

Audience Member: Did Woochul get a chance to watch the film before you released it, and did he ask for any scenes to be edited? I’m also curious about the treatment you’ve given this film, where we get to watch and observe Woochul but we don’t know his inner world. You’re the one telling us about what you had gone through.

Kelvin: In the beginning I didn’t want to have a voiceover narration but when I was about 80% done with editing I realised that without narration, looking at Woochul by himself wasn’t so interesting.  Basically he wasn’t a complete character, because you’re inside the military and you really can’t speak how you feel. I tried interviewing but it didn’t work out.

I realised that maybe this film isn’t really about Woochul himself but about this shared experience and about my reflections, and my relationship with Woochul as well. Then I decided to incorporate my own stories: some are real and some are kind of fiction and that gave me some creative freedom as well.

I didn’t want to make a piece where the filmmaker stands away from my character and pictures him from a very third person objective point of view. I really felt like I was one of those guys, like when they’re dancing in the church scene. I couldn’t really make a cynical, funny point of view because a few years ago, I was one of those guys also. Through this relationship some kind of subjectivity forms. So that was my formal strategy.

In response to your first question, Woochul did get to see the film. There was one scene where he goes on vacation with his girlfriend to Jeju Island, and he didn’t like that. He has a different girlfriend now! I’d spent a lot of money shooting that but I had to take it out. I think it was a good choice. It was unintentional but in the end it helped give that feeling of claustrophobia, confinement [within the military]. 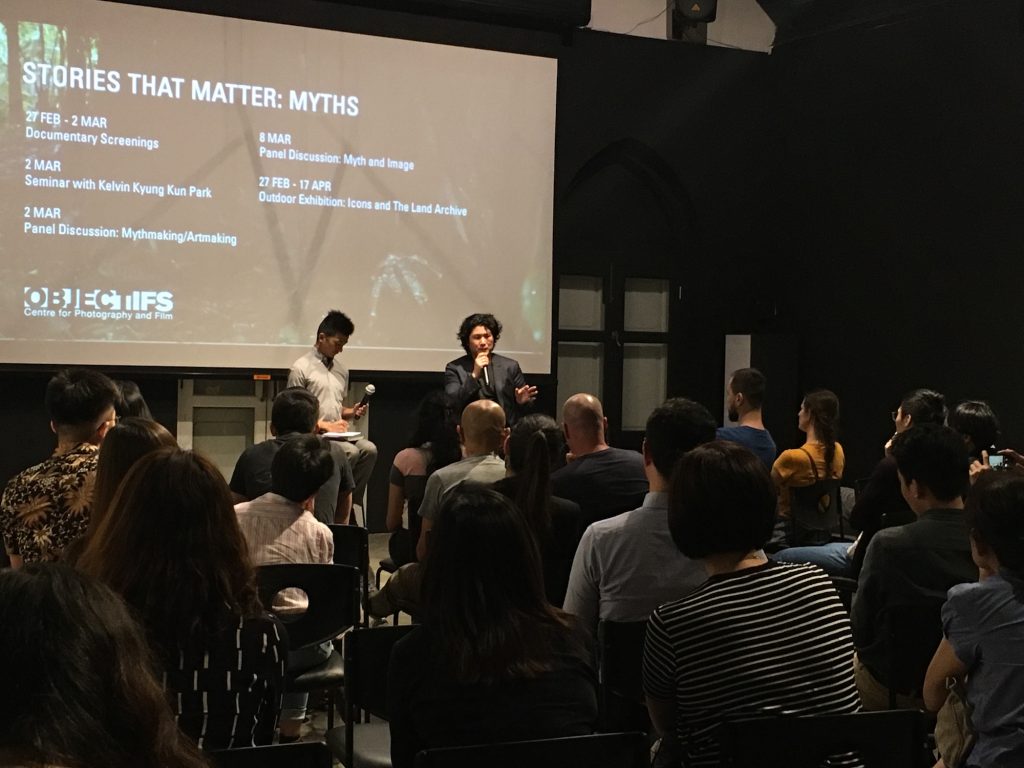 Audience Member: I enjoyed the film immensely. A lot of what was on screen resonated with our own experience in Singapore. It’s something that really connects and binds a lot of male Singaporeans. What kind of film did you intend to make going in? It seems in a lot of ways that you got lucky with Woochul, that he turned out to be such an interesting and compelling subject matter. Did you have something in mind? Otherwise it seems a risk to just go in and end up with nothing.

Kelvin: In the beginning, in the casting process, Woochul volunteered to be an honour guard. They have a quota of people who apply to be in the honour guard. Working with closely with the Department of Defense, I got the list of such volunteers and we narrowed it down to three people. We followed three guys in the beginning and one by one they decided they didn’t want to be part of this any more. The military itself is hard but it’s just a hassle being followed around. I think it’s good luck for me they backed out and I was left with only Woochul. It became a different film focused on one person’s journey throughout the process. As an artist the risk is something you take. Without risk nothing interesting comes out.

Audience Member: Of all the military units why did you choose the honour guard to feature? And because it’s a two year process, is it very time intensive? Did you have only one project during this two years, with all your time invested into it?

Kelvin: I wanted to shoot the honour guard because the way I felt when I was in the military, I was stationed right at the border between North and South Korea, and we did these kinds of military exercises that felt fake to me, we were just playing, performing military activities. War didn’t happen for 60 years. I’d never experienced war, so the idea of war just became very unreal to me.

And inside the military how they discipline you is in the way you dress, the way you posture, talk. All these elements of performing are at the essence of what the military is. If you look at tribal societies, they perform warrior dances instead of making real war. So that’s how they deter war.

The military has this performative function in society and I think the honour guard is the cherry of that performance and I really wanted to focus on how they train their bodies to learn certain moves through repetitive motion. The honour guard was the perfect example to me of what symbolises the military.

Stories That Matter: Screenings is part of Objectifs’ annual Stories That Matter programme. Visit our website for full programme information. Visit Objectifs to view free outdoor photography exhibitions (on till 21 Apr) by Robert Zhao Renhui from Singapore and Swiss duo Cortis & Sonderegger, and join us on Fri 8 Mar, for a panel discussion on Myth and Image with Robert Zhao Renhui, Ore Huiying and Tom White.