Stories That Matter 2019: Myths‘s documentary screenings kicked off at Objectifs with a screening of Ex-Shaman, directed by Luiz Bolognesi.

The film was followed by a post-screening discussion with Stories That Matter programmer Chelsea Chua, and artist Zarina Muhammad. [Read more about the film and about them here.] Read on for selected highlights from their discussion. Their responses have been paraphrased for brevity.

Reactions to the film and why it was selected:

Chelsea: Ex-Shaman addresses quite directly the place that cultural myths and how stories shape our existence and ways of being. As a docu-fiction hybrid, it also questions narratives of truth. How do the fictional and non-fictional elements help us understand these issues better?

Zarina: Linda Tuhiwai Smith says that ” ‘research’ is probably one of the dirtiest words in the indigenous world’s vocabulary”. This film made me think about the imbalances between the research and the researcher. As a visual artist and researcher it is very important for me to not use these narratives as a prop for my own work. I’m always interested in finding ways to destabilise the voice of the single storyteller. 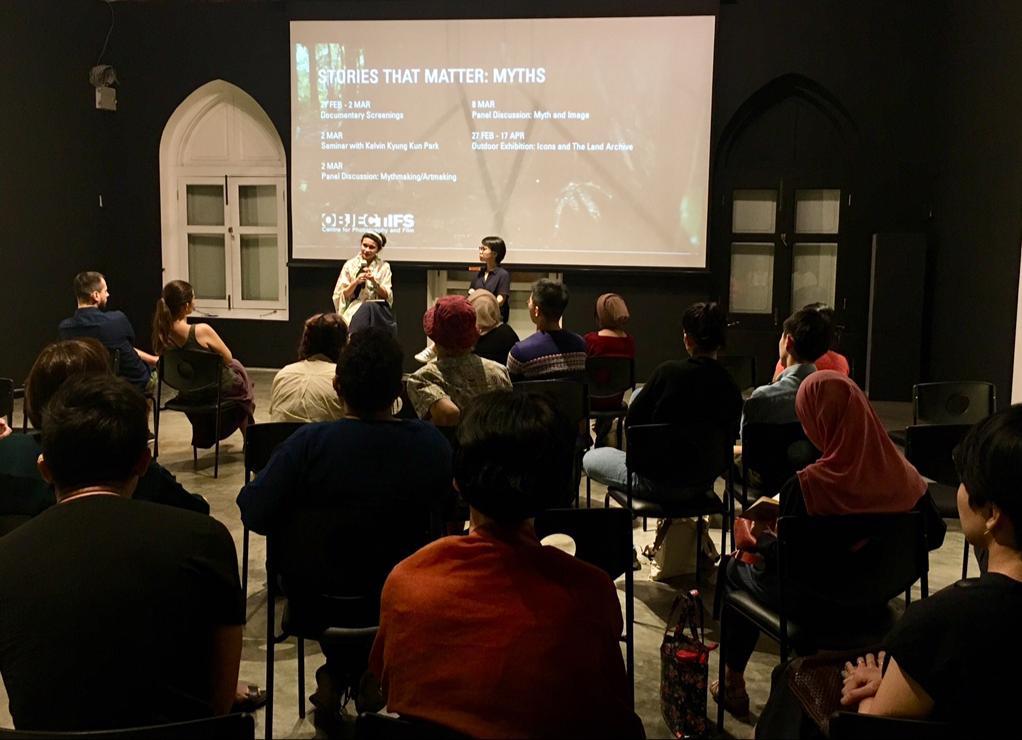 Post-screening discussion with artist Zarina Muhammad (L) and Stories That Matter programmer Chelsea Chua (R) after the screening of “Ex-Shaman” by Luiz Bolognesi.

On the researcher and filmmaker as “cultural ventriloquist”:

Chelsea: You spoke about systems of information. We see how Perpera, the ex-shaman, is locked out of systems of information right from the opening scene where he’s handed a thesis that he’s clearly contributed to but has no way of accessing because he doesn’t understand the language, and when he goes to visit a government office, he needs to navigate systems he’s unfamiliar with, and in the church where he’s figured as an outsider, we see how he’s had to accommodate new systems of beliefs within his own. I think it is important that the film very much portrays his everyday life, and how his systems of knowledge exist alongside notions of Christianity.

Zarina: When we are researching on such topics we become a sort of medium or ventriloquist. Art can play a certain role in cultural ventriloquism.

Chelsea: How do you position yourself as a researcher?

Zarina: Something I’m meticulous and fastidious about is always checking my blind spots and reconsidering the assumptions I may have. I’m also careful to not perpetuate exoticising of communities I’m not part of.

Chelsea: This film in its mundanity and portrayal of daily life downplayed the spectacle, even in its depiction of shamanic rituals. It’s figured as an everyday practice. The filmmaker, despite him not being a member of the tribe but a white, Brazilian man, he filmed them with incredible sensitivity.

On ethical research and representation:

Zarina: Michael Taussig has said that “Anthropology is blind to how much its practice relies on the art of telling other people’s stories—badly. It’s important to not generalise, and to perhaps focus on telling the story of one person because even they can’t be an overarching representative for the whole community. Also, about not being fixated on authenticity.

[Audience Member]: As a filmmaker, I was uncomfortable how the film turns Perpera into a symbol. The ex-shaman was still cast in the traditional narrative arc of the ‘fallen hero’, and it becomes hard to distinguish the lines between what really happens as a documentary and how much of it is imposed by the filmmaker.

[Audience Member]: I am also a researcher and would emphasise self-reflexivity, even if you are researching a community you are a part of. We must consider why we are researching a topic, what questions we’re asking, and for whom. We need to accept that we cannot be objective, and don’t claim to be so. You can share how you felt when you were there, and demonstrate an awareness that your presence was affecting them.

Stories That Matter: Screenings continues till Sat 2 Mar with three more documentary films, each followed by a post-screening discussion. View the full programme and get tickets via our website or at the door. Visiting filmmaker Kelvin Kyung Kun Park (Army) will also give a seminar on “Constructing the ‘Self’ through Art” on Sat 2 Mar; register here.