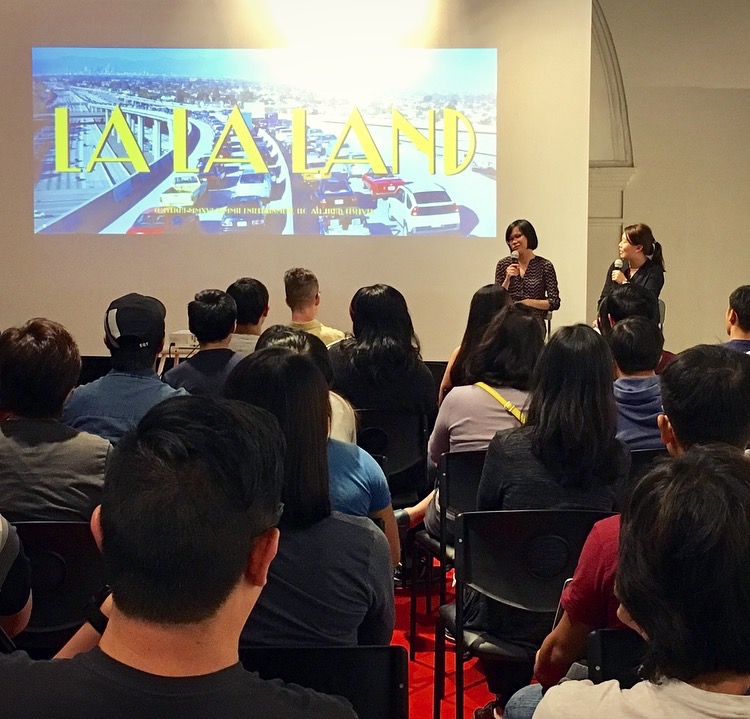 Advice from an Oscar-nominated Singaporean working in Hollywood

On Wed 7 Feb, Objectifs hosted Ai-Ling Lee, an Oscar-nominated Singaporean sound designer with 20 years of experience in Hollywood, for an evening in conversation with her industry colleague Lim Ting Li.

With specific reference to three films she has worked on — musical La La Land (2016), drama Wild (2014) and action-packed The Maze Runner (2014) — Ai Ling took the full-house audience, comprising many pre-professional and professional sound designers and editors, through her career and processes. Read on for some highlights from the talk.

On the musical sequences in La La Land:
Ai-Ling screened two scenes from musical La La Land, for which she was (as part of a team) nominated for Oscars in Best Sound Editing and Best Sound Mixing: the opening sequence “Another Day of Sun” and an iconic tap dance sequence, “Lovely Night”.

“Another Day of Sun” is very sound-driven. Ambient sounds and foley sounds were selectively added in post-production so that the audio recorded singing would sound very natural, like everyone was actually singing outdoors on a noisy highway.

“Lovely Night” was not initially intended to be a tap dance; it was performed as a “soft shoe number”. But the decision was made later to turn it into a tap dance number, specifically with a “Fred [Astaire] and Ginger [Rogers] kind of sound” from classic musicals. Together with La La Land director Damien Chazelle and the choreographer, Ai-Ling reviewed clips from these old films and narrowed down the specific tone required for the routine. The choreographer and her dancers also tried different shoes on different surfaces on a foley stage.

There was also the challenge of matching the tap footsteps from post-production to the actual footsteps of Ryan Gosling and Emma Stone as they performed on set. As they are not professional dancers, and were dancing upslope, the music had to be slowed down so they could keep up with the steps. Ai-Ling thought about changing the frame rate in order to meet Chazelle’s exacting standards for the tap steps synchronising with the visuals. But eventually, the footage was enhanced with extra footsteps and scuffs that make it look natural on screen, especially to general audiences.

On the use of environmental sounds to reflect characters’ interiority:

Wild is a biographical adventure drama film based on the true story of a woman who embarks on a 1,100 mile hike in the US on a journey of self-discovery and healing after tumultuous experiences. Though the protagonist spends a lot of time alone and silent, the film cannot go without any sound for long periods. Environmental sounds like those of insects not only emphasised the remote natural setting but also reflected the character’s frame of mind and created tension.

On creating the sounds for fantastical creatures:

The Maze Runner series is a dystopian science fiction action thriller prominently featuring deadly beasts called Grievers. Creating sounds for such fantastical creatures is an opportunity for creativity and experimentation. Ai-Ling shared that she uses a mix of animal sounds (elks, seals, birds) and everyday items (like styrofoam rubbing, and rocks and pebbles).