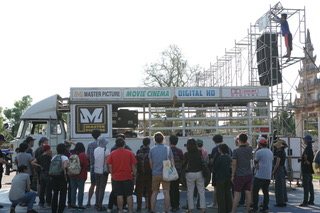 RECAP: A history of cinematic exhibitions in Southeast Asia

RECAP: A history of cinematic exhibitions in Southeast Asia

As a writer, curator and teacher, May Adadol Ingawanij has dedicated her work to researching film histories of Southeast Asia. In her talk, she spoke about the genesis of her latest project, Animistic Apparatus, and how it proposed a new way of thinking about film histories and moving image work in Southeast Asia outside of dominant, conventional narratives.

The changing role of itinerant film projection in Thailand

May’s research for the past 10 to 15 years has concerned film history, particularly ideas of spectatorship. In a bid to move away from ideas of cinema as a modernising force in Southeast Asia, she turned her attention away from stories of film production, to how film was circulating in the form of travelling outdoor film exhibitions, or film projections in Thailand.

“I started to learn that unlike the usual story of cinema and film history, this scenario of exhibition didn’t necessarily just serve the purpose of showing films for commercial purposes. There were also other kinds of uses for itinerant film projection.”

May citied the anecdotes and photo archive of Songdej Khan, whom in his youth had worked as film projectionist in Udon Thani, North Thailand in the 1960s. In one example, a film was advertised in a format of a procession around the town that was similar to processions taking place during religious festivals. 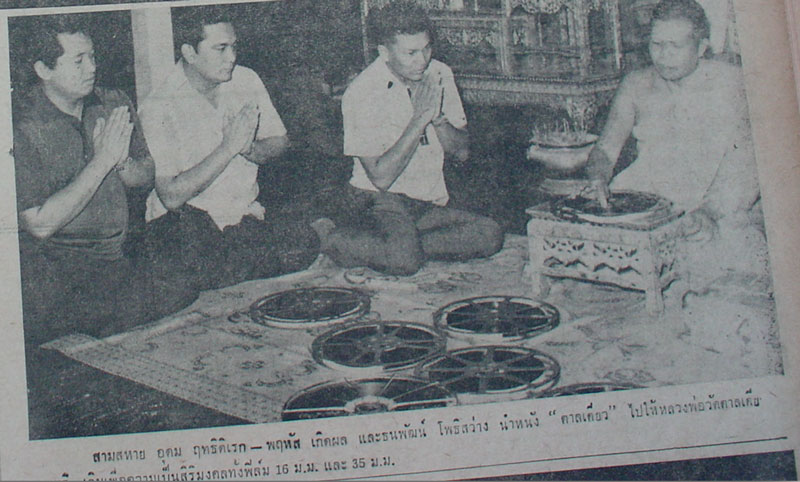 A photograph in Thai Rath newspaper dated 18 August 1969. The caption says that the makers of the film Taal Diew took 35mm and 16mm reels of the film to be blessed by a monk for auspiciousness.

“I was very interested in the sort of merging the intertwining of cinema with pre existing ritual and festive forms, and I think you could see that captured in this photograph here. [T]his sort of ephemeral material, particularly those images from scattered photographic archives, really got me interested in the potential to make connections between moving image practices of the present and the history of itinerant film exhibition.”

During the Cold War, the United States ran a free world propaganda initiative in Thailand, much of which took the form of projecting films, both as entertainment and as propaganda in key strategic areas. This resulted in the importing of 16mm film projectors to Thailand, as the US Information Service sought to organise travelling film projections around the country. When the US left Thailand, May speculates that many of the tools used in these film events “filtered down to the itinerant projectionist, who then use those tools for other purposes. I think it was at this point that a kind of network of itinerant film projection for ritual purposes started to develop.”

Together with collaborators such as artist Tanachai Bandasak and anthropologist Richard McDonald, May travelled to Khon Kaen, to research the practice of mobile film projection as offerings to spirits. Such practices occur also in other parts of Southeast and East Asia, such as ‘Mosquitio Cinema’ in Taiwan, and projecting films for spirits during the Hungry Ghost Festival in Malaysia. 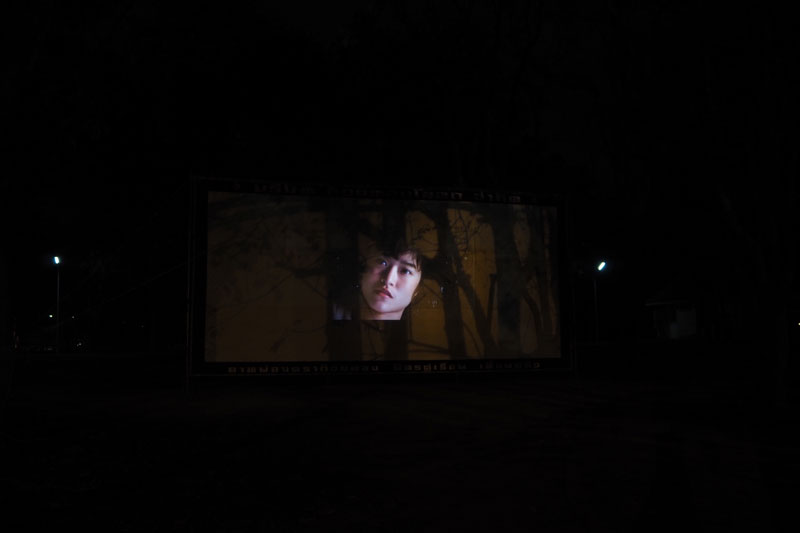 “Animism becomes a way of thinking about the communicational and temporal practice of precarious humans in order to gain some agency, and to relate with other humans and other beings within an ecology – which we can think of in simple terms as a kind of local environment of existence. Animism becomes a way of thinking about rituals and practices of communicating, especially communicating with spirits as modes of humans relating to each other and to the more-than-human, to an ecology in which humans exist as a small and powerless part, in order to try to have a life, in order to try to imagine what a future could be.”

This also brought May new insight into how moving image work by Southeast Asian artists could be viewed, citing the multimedia installations and performances of Korakrit Arunanondchai and Boat People by Tuan Andrew Nguyen.

In the course of her research, May decided to organise an artistic lab and field trip activity in Udon Thani in northeast Thailand. The trip took place in 2019, whereby May and co-curators Julian Ross and Mary Pansanga took a large group of artists and curators working in Southeast Asia to Udon Thani to learn from the itinerant film projectionists she had met and interviewed over the years. The group experimented with using the technical tools and projection techniques of the itinerant troupe Thanawat Phapphayon, owned by projectionist and film technician Kasem Khamnak. The experience aimed to facilitate artistic experimentation and engagement with locally existing expertise in itinerant film projection, not as a means to produce a public performance, but as a way of generating an affinity between animism and Southeast Asian artist moving image. 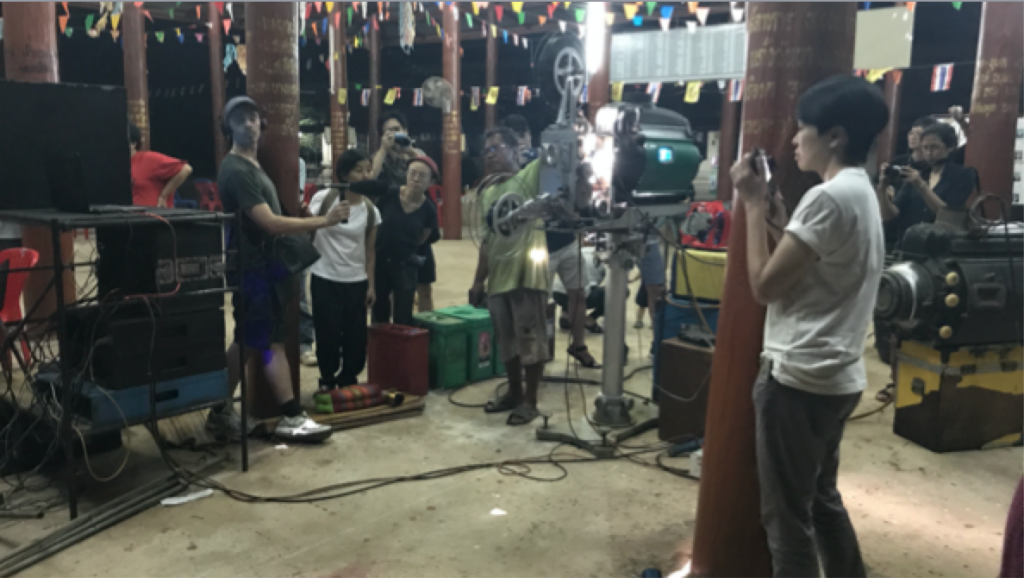 Aside from artistic play, the field trip also brought forth questions about how and why we present art. Said May, “Is it time to shift away from this convention of thinking about us curators, programmers or arts event organisers, as those with the power to organise an event for the edification of the people? How can we think about events organisation in relation to this genealogy of regional practice whereby acts of communication and performances were done to address, not people at all, but things and beings that are far more powerful than people? How can we work within that genealogy? What do we do with that genealogy? And what potential new forms of moving image or potential new event forms can come out of really thinking seriously about and engaging with this genealogy?”

When asked about how the field trip had influenced her thinking about curation:

“It encouraged me to think in another way about the spaces within which we curate works. During the field trip I had the chance to shift to approaching the open air sites we were using for the experiments, as simultaneously the spaces and grounds customarily if not legally owned by the community of people in that locality, and as spaces owned in another sense by spirits regarded as having power over a particular territory, a micro territory. If you approach curation as if it too were some kind of communication ritual addressing locally sovereign spirits, you also have to factor in the question of who, within this ecology of human and nonhuman existence and entanglement, has sovereignty over the space you’re practicing in. Ecology entails more than just people, and ownership also implies nonhuman territoriality. What implication does this have in terms of artists and curators doing something within that space?

I think it certainly taught at least some of us in the group to think again, about what your agency is, when you turn up, you have to somehow do things with the assumption that you are powerless in that space, because there are bigger powers. That power might grant your hospitality, or might not.

That’s why reading works on animism written by anthropologists, particularly anthropologists of Southeast Asia, who are researching historical and contemporary practices of animism, is so interesting to do from a curator or film programmer’s point of view. These works tell stories revolving around the question of practices and possibilities of agency. What’s at stake in these works is still to trace possibilities of people’s agency, rather than to be overly invested in the idea of the agency of objects. But the overriding concern is the agency of people who are powerless in an ecology presided by local spirits. There are resonances here with another kind of ‘ecology,’ in the sense of societies governed by authoritarian rule in which people are precarious and powerless. And I think there are lots and lots of resonances between people’s sustaining of animistic practices and efforts to artistically and culturally create expressive forms in authoritarian societies.”

About the importance of looking into histories of the region

“A lot of us live or have very deep engagement and personal ties with Southeast Asia. This is also a moment where Southeast Asia is being turned into a thing by contemporary art institutions, so it’s also important to be a bit rebellious.

When Southeast Asia is being turned into this category of a thing that circulates in various sorts of established institutional circuits of contemporary art, we have to be provocative about studying and making a proposition about what this region could be.

So that’s why I turn to animism as a way to propose, and I hope perhaps to be a little bit cheeky in proposing, what makes Southeast Asia ‘Southeast Asia’ in relation to artists moving image.”

MacDonald, Richard and Ingawanij, May Adadol. 2010. ‘Blissfully Whose? Jungle Pleasure, Ultra-Modernist Cinema and the Cosmopolitan Thai Auteur,’. In: Rachel Harrison and Peter Jackson, eds. The Ambiguous Allure of the West: Traces of the Colonial in Thailand. Southeast Asia Program Publications, Cornell University.