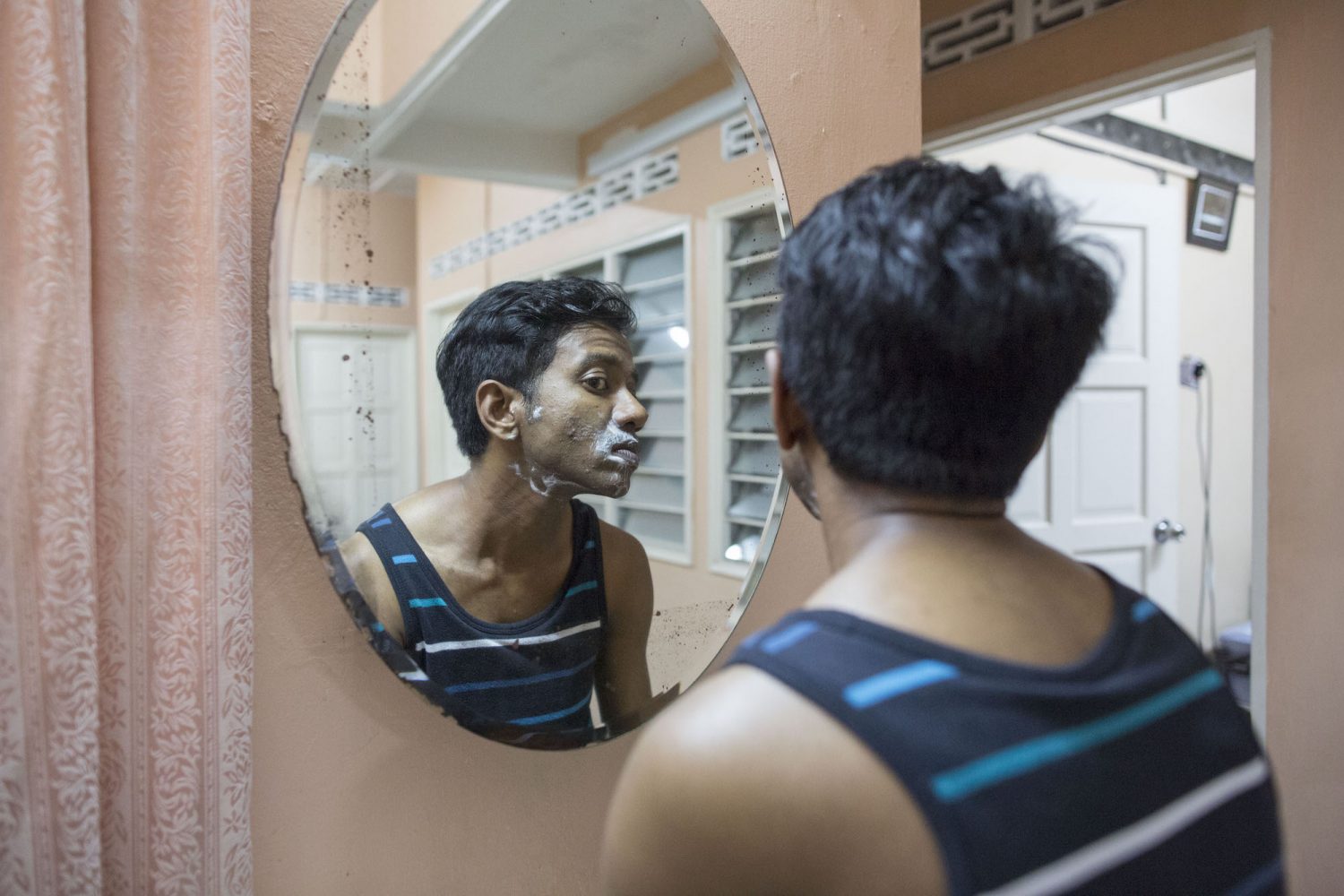 Local photographer Grace Baey is the inaugural recipient of the Objectifs Documentary Award 2018 (Emerging Category). Her solo exhibition (Un)bound, a collaborative project with and about transgender individuals in Singapore, is on till 14 Apr at Objectifs’ Lower Gallery.

On Sat 30 Mar, the eve of the annual International Transgender Day of Visibility, Grace gave an artist talk together with Sonia, Jose and Sham, three of her four key collaborators featured in (Un)bound. Read on for a recap of their discussion moderated by Chelsea Chua from Objectifs. 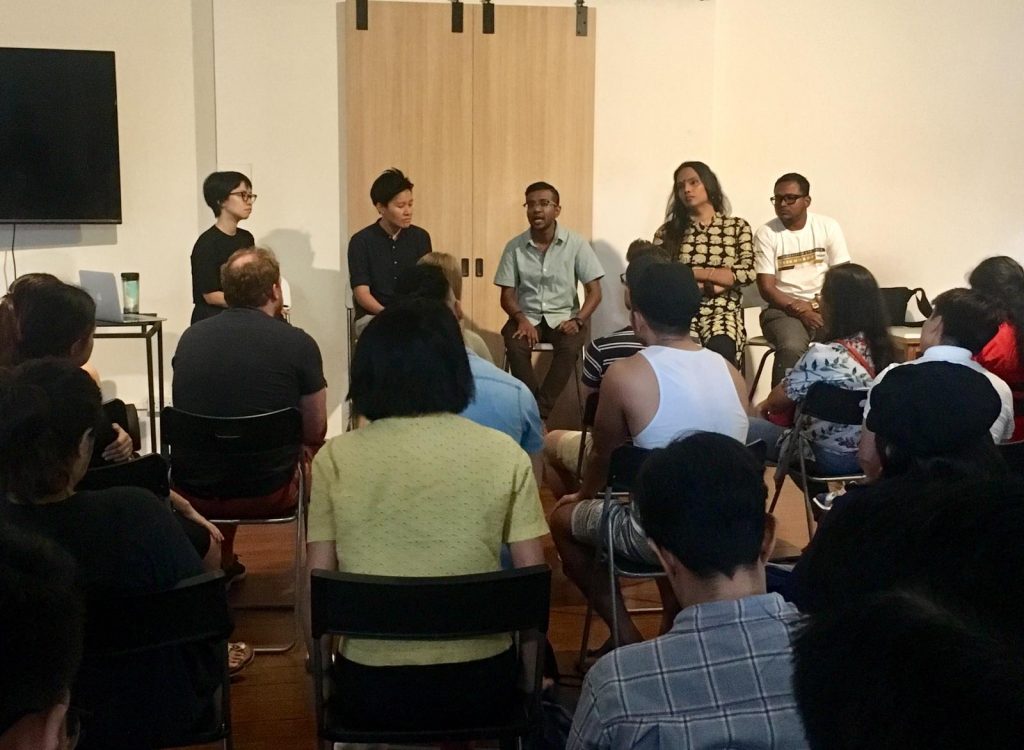 Grace studied human geography and international development studies in university and aspired to work in an NGO. She credits her overseas tertiary education with exposing her to “different issues and critical concepts”. She did not plan to be a photographer when she was younger but “through images” learnt more about the world around her, by reading publications like National Geographic.

After graduation, she worked with low wage migrant workers in Singapore but “grew restless with research and craved on the ground engagement, in more depth, with the people we were talking about”. In 2015, as a participant in Objectifs’ Shooting Home mentorship programme, she made street portraits of transgender women in Little India in the series 8 Women. She sought to examine “what trans women’s reactions to the camera were, if they could be on the front page of a fashion magazine how would they want to be seen”?

Grace described 8 Women as a “fleeting project” and felt the need to “pull back” and learn more about transgender people in Singapore before documenting them further. She spent a few years involved with the community and their events, such as assisting Sonia, founder and organiser of annual pageants for trans women in Singapore, with planning and photography.

In 2017, Grace spent a month in Myanmar through Objectifs’ reciprocal artist residency with Yangon-based organisation Myanmar Deitta.  She produced the (ongoing) body of work Living Choices about trans people in Yangon, where she made a gradual shift towards focusing on themes of family and relationships.

As Grace previously shared, (Un)bound is her first project where she “actively involved individuals [she] worked with not just in the image-making process but also in putting together the story edit and narrative”. Three of her four main collaborators each shared how they came to be involved in the project.

Jose and Grace first met in Malaysia at an event for trans men. Jose said: “We built a friendship for more than a year first. I was reluctant at first as the project would involve revealing quite a bit. If you’d asked me three or four years ago I wouldn’t have agreed as my dysphoria was bad.” Jose shared that notions of masculinity and femininity can be a divisive point in segments of the trans men community. He said: “Some believe it only ‘counts’ if you are taking hormones. But transitioning is not just about the physical aspects but also emotionally and mentally.” After building trust with Grace, he felt comfortable collaborating on a series of portraits showing his use of a binder.

Sonia’s friendship with Grace grew while they worked together on the beauty pageants. Sonia said: “I immediately said yes to the project due to the trust I have with Grace. The public should know about us and our experiences.” Her favourite images are the “glamourous pictures in sarees, taken at Tekka”.

Grace shared that the theme of family came up naturally, and that “we were in mutual agreement to keep the focus on the theme of family as it might be more productive, personal yet universal”. Sham, a trans man who is married to a woman, agreed that “family provides an entry point [to the topic] for people who are otherwise not familiar”.

Sonia shared how trans women organise themselves in informal families, as “some of us have to put aside our [biological] families when we transition”, with some trans women referring to their peers as “sisters” and mentors as “mummies”. In her experience, ultimately her biological family “was there to bless [her] wedding”, which meant a lot to her and her late husband.

Jose shared that such a system does not really exist among trans men and that it took almost two or three years for his family to reconcile. In his experience, it was a “struggle for full acceptance”, and that “when an individual is transitioning, the whole family is transitioning”.

Yet, he did not plan to give up on his family, and reflected that there still existed “mutual love in different forms” despite points of disagreement and conflict.

Similarly, Cassandra (another of the individuals featured in (Un)bound but who was not on the panel) received letters from her aunt and grandma, which are on display in the exhibition, who expressed concerns about the physical costs of transitioning, like possible unintended effects of medication.

Jose, Sonia and Sham are all involved in advocacy in various forms and shared how collaborating with Grace on (Un)bound differed or impacted their subsequent approach. Grace said: “My approach has evolved from traditional documentary to collaborative projects. As I’m still an outsider entering this space, it wouldn’t be right to exclude their advocacy. Scrapbooking offered a more flexible medium, and it was a fun exercise too, in terms of putting together their stories”.

Sonia shared that “normally we won’t be so open, share everything from A-Z” because she has felt misrepresented by the media in the past. With (Un)bound, she felt there was much more trust and openness. She has seen that some trans people are “pushed to drugs because of issues like loneliness” and seeks to “move trans women away from sex work” as it is not sustainable, especially with age. She advocates for them to pick up a skill that can translate into gainful employment.

Sham founded a support group called Kopitiam Brothers for trans men. He deliberately “didn’t choose an atas [high class] name but something very local to keep it very accessible”. Like Jose he has also worked with the community in Malaysia and shared that there are differences in the key issues facing the trans community on both sides of the Causeway, in terms of “money and privilege”. Jose agreed, highlighting that in Singapore advocacy focuses on legal aspects such as gender markers on official documents (with Sonia adding that “being able to change our [gender identity on our] ICs and passports is itself a blessing”) while in Malaysia crime is an issue, and the pressing need to address is violence against trans people.

Jose acknowledged there are disagreements within the community on what defines a trans man, and who should be included. Some feel that there is room for lesbian and/or butch women while others do not. He does not believe in some of the stereotypes around masculinity, or that trans men should meet certain “standards” which are inaccessible to some, like older trans men who only come out in their 50s. Jose said: “If you know who you are, that’s all that should matter. I currently do things in my own time, in my own way. I just listen to people without judgment.”

(Un)bound by Grace Baey runs till 14 Apr at Objectifs’ Lower Gallery. Admission is free. Please note the exhibition is rated Restricted 18 (Transgender Theme and Some Nudity). Age-checks may be required prior to entering the gallery. Read our interview with Grace about (Un)bound here and press coverage in The Straits Times, Coconuts Singapore,  and CLEO.

Also on till 14 Apr in Objectifs’ Chapel Gallery is 63 Years by Mai Nguyen Anh, inaugural recipient of the Objectifs Documentary Award 2018 (Open Category). Read our interview with him here and stay tuned for a recap of his conversation with 63 Years curator Sam I-shan.

Applications are open till 13 May for the Objectifs Documentary Award 2019. Visit our website here for more information.