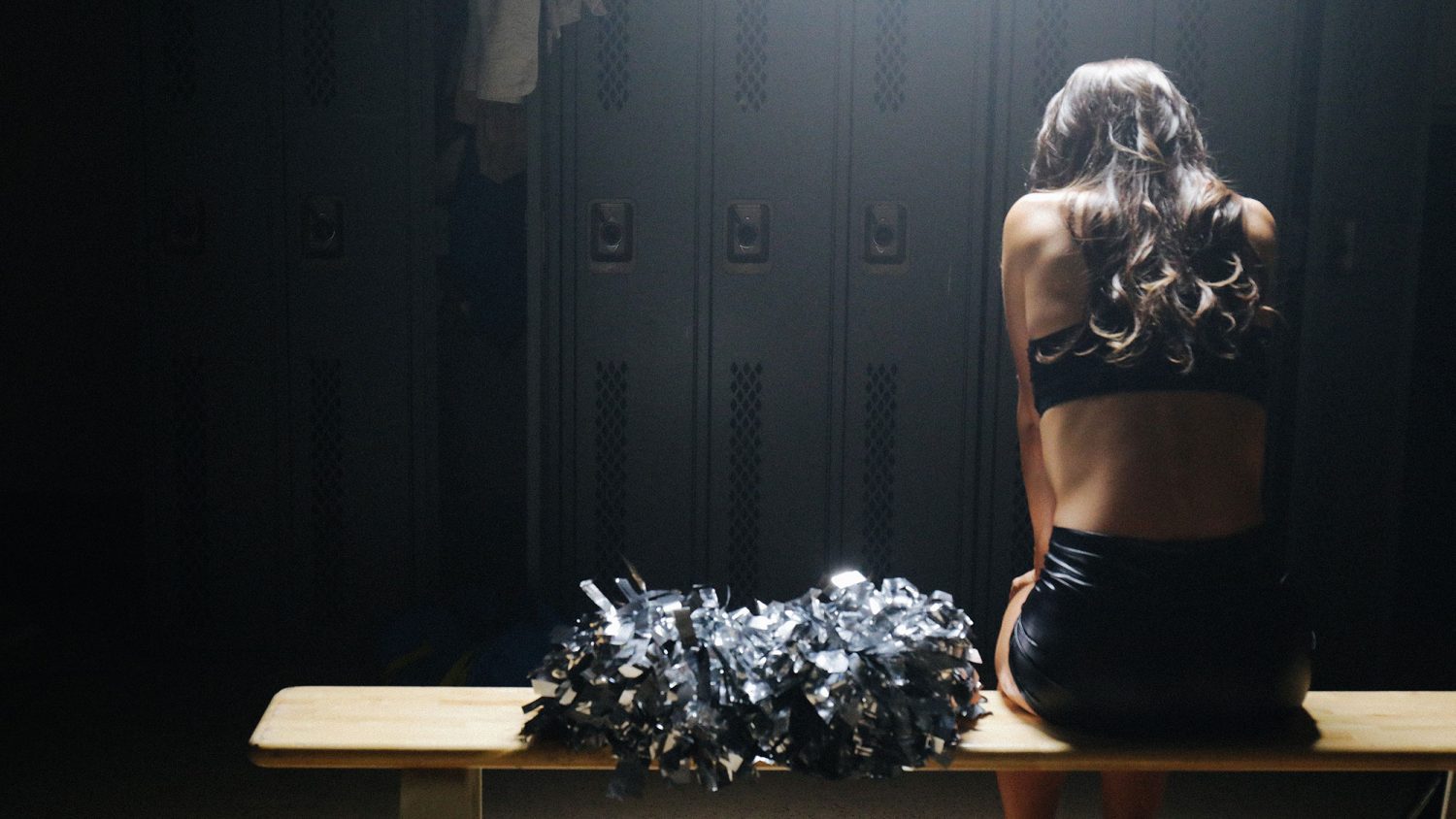 Women in Film 2019: Remedy for Rage kicked off at Objectifs with a screening of A Woman’s Work: The NFL’s Cheerleader Problem, directed by Yu Gu.

The film was followed by a post-screening discussion with Women in Film 2019 co-curator Kelly Leow, and Shailey Hingorani [Read more about the film and about them here.] Read on for selected highlights from their discussion. Their responses have been paraphrased for brevity. 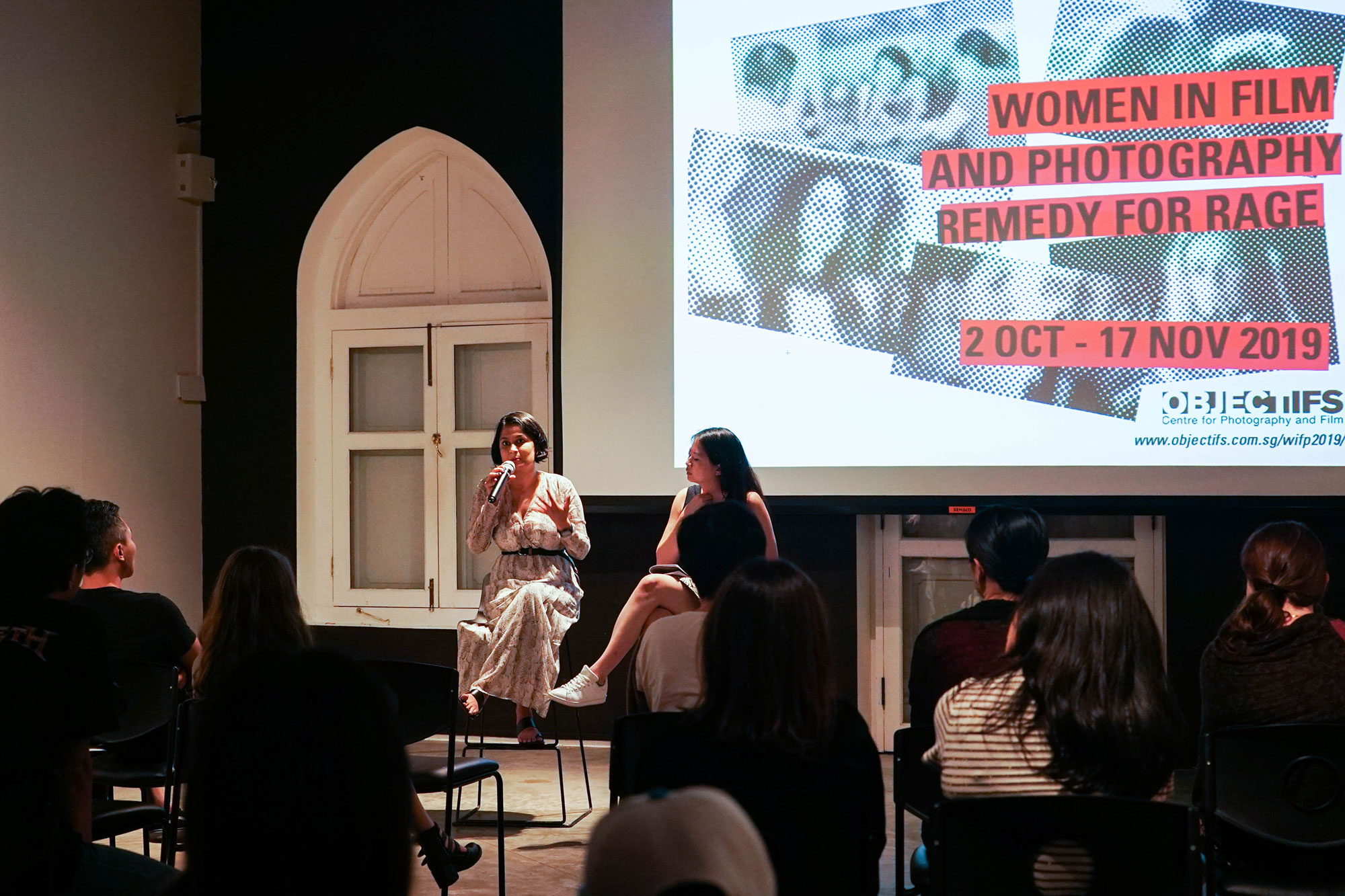 Shailey Hingorani (L), Head of Research and Advocacy for AWARE, and Kelly Leow (R), Communications Manager at AWARE and co-curator of Women in Film 2019, lead the post-screening discussion of “A Woman’s Work: The NFL’s Cheerleader Problem”.

Kelly: This film depicts the inherent devaluation of work that is considered feminine such as caregiving, and that also has an element of sexualisation, such as cheerleading and acting.

Shailey: The film shows how when we think about work, we only see the final product. The NFL (National Football League) would like you to think their cheerleaders are only “working” during the season, but they have spent years developing their art and learning how to cheerlead, attend practices and make numerous charity appearances.

We should expand our definition of work to any physical and emotional labour done for your employer. The perks you may enjoy like a sense of satisfaction, camaraderie and the platform you’ve been given do not mean you shouldn’t be compensated fairly.

Kelly: Many of the “villains” in the film are also women, who are like foot soldiers of the NFL. Some of these older cheerleaders were fascinating to me as they gave the most pushback [to the younger cheerleaders challenging the status quo]. They had suffered at the hands of the same system but were still trying to uphold it. There is a strong sense of sisterhood as the cheerleaders perform together in this highly collaborative art and the service they do, like visiting the armed forces. The older cheerleaders said this camaraderie was its own reward.

Shailey: We shouldn’t just look at egregious cases but also look around us to see how much there is we actually put up with. There is just a tacit contractual agreement we have with employers, even if it’s not in our contracts.

The NF is a huge profit-making industry. They have always managed to manipulate women into either taking back their complaints, or they hand them a little more cash in exchange for their silence.

On the consequences of speaking up:

Kelly: Speaking up is great if you’re able to, but even for women who speak up because they have supportive families, partners who have sufficient income to support them [if they leave or are fired from their jobs], speaking up came with huge consequences. The consequences we ask people to deal with when they speak up is something the #MeToo movement has to grapple with. The film shows that there may be negative consequences. It doesn’t glamourise speaking up.

Shailey: At AWARE we have recently launched a new Workplace Harassment and Discrimination Advisory service. The employment outcomes of reporting and speaking up aren’t often systematically tracked: Are they let go? Does their productivity suffer? How do they cope when the harasser is still employed at the company? We don’t talk much about bullying, and the gender-based discrimination men can also face.

I think it’s okay to remain silent and there’s power in silence as well. Silence and speaking up are both valid choices. If you can speak up, it lets people around you know they are not alone. That’s the beginning of a sisterhood, of developing solidarity in communities.

Audience Member: I found it interesting many women in the US didn’t support the cheerleaders because we have this idea that people are aware of their human rights in the US. The women who spoke against them genuinely seemed not to believe in their cause. How do those of us doing advocacy change such mindsets?

Shailey: Different kinds of arguments work for different people. Some will be moved by personal stories while some will be moved by data. Employers may be moved by the economic cost of less productive employees. The sweet spot where the government is concerned is a combination of human interest stories and hard hitting data.

We need to be careful we’re letting people really speak for themselves and not making a caricature of them. Data can also be problematic as it’s hard to access and you need to spend months finessing it. We also don’t know when people will pick up content and which point they will access.

Audience Member: I am not surprised there are women in the film who didn’t support the cheerleaders, due to internalised patriarchy. A lot of feminists who are minorities are also very well aware that the system doesn’t work for us; we cannot assume that all feminists share the same lived experiences. What about non-white NFL cheerleaders, for example?

Shailey: There’s the notion in feminism that women face a common oppression and that bringing up race and class will divide the movement. But we have to find a way to speak that encompasses the whole range of experiences. It doesn’t mean we have to all love each other unconditionally but it does mean holding each other accountable in terms of experiences we don’t have access to.

Yes, we also need to talk about labour protections more broadly. In the film we see that the US has a minimum wage but it’s hardly liveable. The cheerleaders also have to pay for their own uniforms. We do not have protections for all kinds of work. What about casual workers? Sex workers? Domestic workers?

Of course women are going to reject feminism if it doesn’t work for them. Our work on employment rights is not done yet. We must not lose sight of all the work we still need to do to become a truly inclusive, caring, feminist society.