Objectifs spoke with Jingliang about her experience in Hong Kong, her work-in-progress first feature film and her advice for filmmakers interested in applying to residencies.

What led you to apply for the reciprocal Objectifs Film Residency with Hong Kong Arts Centre?

I was attracted by the idea of writing for a new film away from Singapore, where I knew the film would inevitably be set, as a way of seeing the city in retrospect. I find it easier to think about a story as a past event and I felt that writing from a different place could create the distance I needed to write about events set here. When recounting a story it is always easier to be able to say, “all of this happened a long time ago”.

I was also attracted to the idea of a reciprocal host city in the same way I would be to a blind book exchange — each city would send a little gift to the other and get one in return, and leave each other to make the best of it.

Fortunately for me the exchange partner this year was Hong Kong, a city I was already curious about, especially in light of its present political situation. It is a city that bears so many resemblances to Singapore on the surface, yet there is something undeniably unrecognisable to Singaporean youths in the way the Hong Kong youths came together in the 2014 “Occupy” movement, the kind of energy they were charged with. I was sure that it would be nothing like the Hong Kong I knew from the movies or the press and I wanted to see it for myself.

What were the highlights of your month-long residency in Hong Kong?

I think it was a particularly memorable chat in a cart noodles（車仔麵）shop with two of the filmmakers I had only met for the first time in Hong Kong, who were also studio mates. It was a cold and rainy afternoon and we huddled over our hot noodles. We talked about how they felt about this crucial and uncertain time for Hong Kong as China’s national anthem played out on the television behind us.

I actually felt quite envious of the impassioned way they spoke of protecting the city’s culture and identity. The problem with identity for me had always been to do with constructing one in the first place — the idea of fighting tooth and nail to protect one was so foreign to me. I thought about our little chat long after I left Hong Kong.

I feel incredibly grateful to the staff of Hong Kong Arts Centre and the friends I met in Hong Kong, some only for the first time, for their kind hospitality. They welcomed me, introduced me to their work, showed me the best of their city and shared with me what they cared about the most.

We understand you’re currently working on the script for your first feature film. Could you share more with us about it?

The story I am working on is based on a feeling of otherness growing up in Singapore, that I have carried with me into adulthood. In recent years I have clung on more desperately than ever to identifying as a Chinese person. I clung on to bits of references to — they are never complete stories — migrant ancestors docking on harbours of Nanyang, to being understood by Mandarin speakers from different cities, to songs and poems and sayings I grew up with that connect me with Chinese people from the rest of the world. It is all that I have to place myself in the world.

There is a saying that Chinese people are ‘like cockroaches’, in that we can make a colony and survive almost anywhere on earth. I imagined myself as one part of little colonies of cockroaches scattered across Southeast Asia and the rest of the world. It is different from what constitutes a Singaporean identity or a Malaysian identity.

In Hong Kong I feel a strong sense of a community bound by a shared language and culture that does not necessarily include me. I am almost envious of it. The phrase “we are all Chinese” is no longer a pure and simple statement; it is fraught with controversy and political implications, and is not to be uttered. I am warmly embraced in Hong Kong, as a guest. It has given me a lot to think about. A feeling of otherness can only arise in the presence of a majority identity. For the first time in Hong Kong I was able to imagine what it was to think and feel from the perspective of one.

How did the residency help with the writing / research process?

At first, I thought that spending time away from Singapore would allow me to look at it from a distance and make it easier to focus on a story set there, but by the second or third week, I had started to feel quite ill sitting in my Mong Kok apartment staring at my laptop. Consuming food began to feel like it was purely for sustenance. As it turned out, it was the claustrophobia that forced me to get out, show up, talk to people, slip invisibly into crowds and streets, that helped my mind get going again about the film.

This feeling of claustrophobia had much less to do with the physical apartment than the fact that I was spending most of my time in the heart of the densest part of the city, surrounded by “people-scapes”, which tend to make me feel even more solitary than when in the presence of nature and landscapes. It was a kind of illness reserved only for urban dwellers.

Yet at the same time, I realised that it was necessary for me to be in the midst of crowds, streets, movement, people, in order to continue thinking about my work. It had to be a reactive process; there had to be surfaces from which to bounce off, which could not be, as I found, a laptop screen, nor four walls.

Perhaps rather than a “script”, with all the details worked out down to every line and action, I wanted to use the time in Hong Kong to develop a set of directives based on which I would shoot the film. I would find a location and an actor that would fill in the details themselves, that would instantly show what I wanted to show, I thought to myself, and in order to do this I must be careful to listen when people are speaking, to be totally present when a situation opens up to me.

During my time in Hong Kong I forced myself to start doing this, meeting as many people I could to just sit with them and listen to them. In Singapore it is very difficult to do this, I realised. We seem to have this need to fill in the silence, we need to talk all of the time. There, I was a visitor, a curious guest, naturally inclined to the role of a quiet observer, in part due to my inability to speak Cantonese, which made this easier.

So my time in Hong Kong was really about deciding what to eliminate from the “script”, what parts of the story to reserve for the actual location we will use, and the actual people who will play the characters, to fill in the details.

I feel that in Hong Kong today, just like in Singapore, for the most part, cultural life is led by consumer demand. Almost any form of art making requires one to pull out some quantifiable measure to justify its value, to immediately think about cost — and with cost comes weighing it against benefit. It is impossible to pull away from numbers in these cities. It reminds me more than ever to be firm about approaching filmmaking in a way that does not reduce it to a product.

But with every city driven by economics comes little pockets of resistance — groups that continue to commit themselves to promoting the inherent artistic value of filmmaking, which are very much alive in both Singapore and Hong Kong. I think that there will always be places for experimentation and there will always be ways to create work without the distraction of commercial elements so long as one seeks them out.

Was there anything that you wish could have been accomplished during the residency that you didn’t manage to?

Perhaps to have made something to remember Hong Kong by, as I have always done somewhat obsessively with other places I visited. Maybe it was the ‘city illness’ that prevented me from doing so. Or maybe it is that I have grown older, and become more conceded to memory fading.

Do you have any advice for filmmakers interested in applying for residencies?

I would say that a residency in a foreign city presents one with the opportunity to relate your work to the larger world and draw out the universal elements in the work, the parts of it that speak to people beyond your own culture, even if each city will have its own character that is not necessarily directly related to your artistic interests. So rise up to the challenge that each city presents and use it to the advantage of your work. 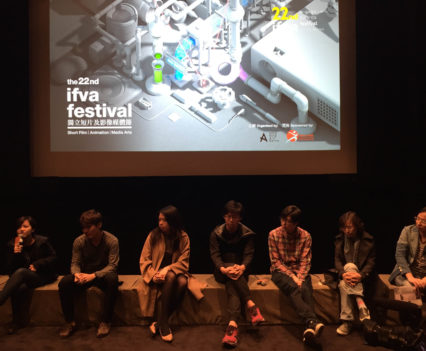 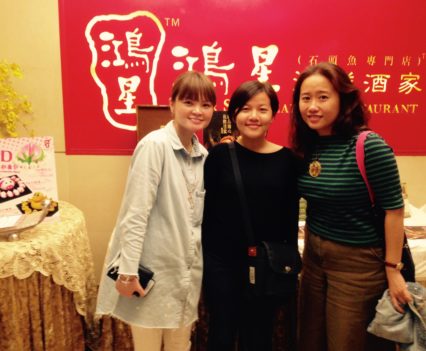 With Samantha and Teresa from Hong Kong Art Centre