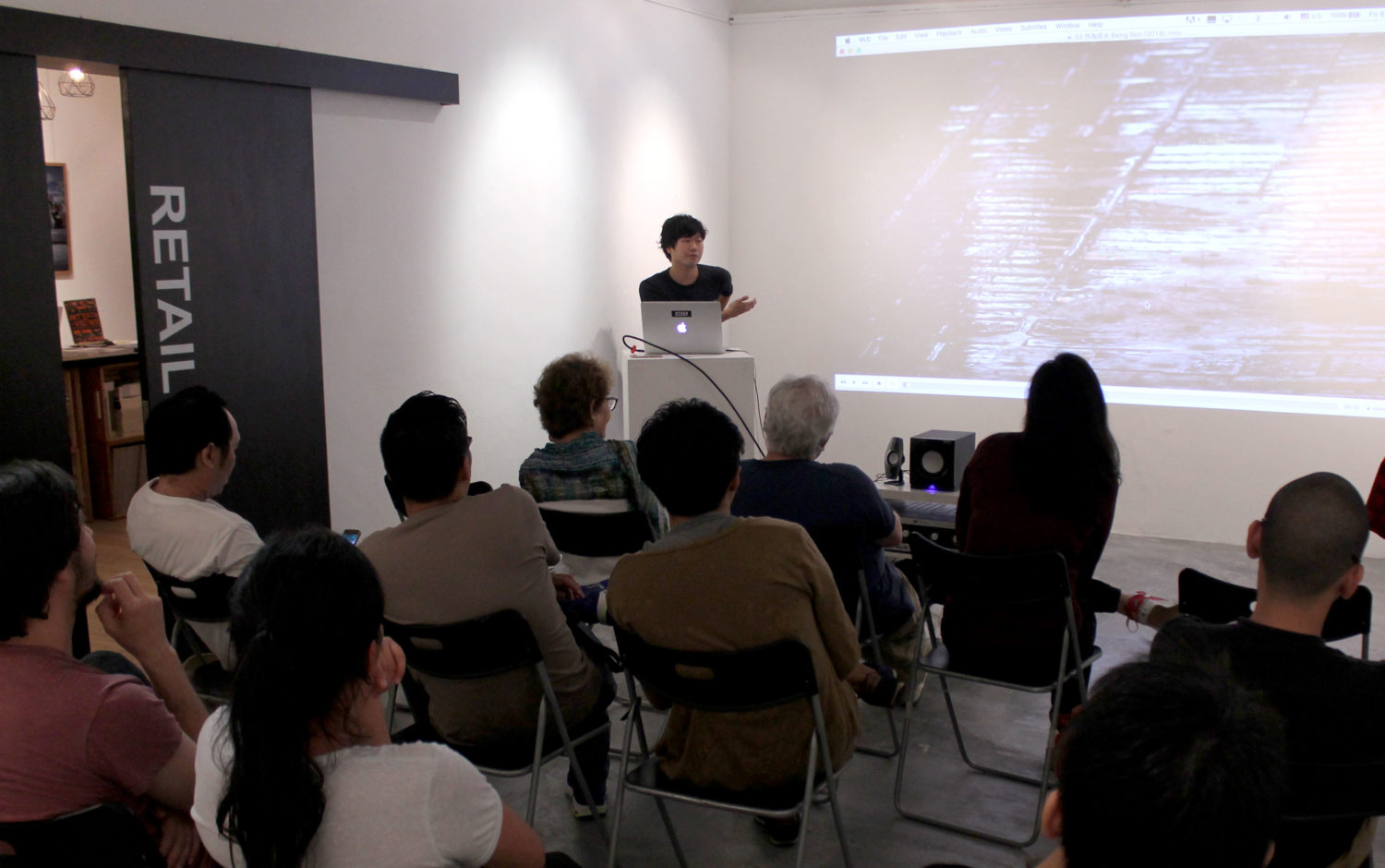 Chan Tze Woon spent January 2017 at Objectifs as part of our reciprocal film residency programme with Hong Kong Arts Centre. He ended his time here with a sharing session on his work and his time in Singapore.

Applications are now open to filmmakers from Singapore and India for Objectifs’ next reciprocal film residency, with Cinedarbaar in New Delhi. Apply here by 18 April.

Chan Tze Woon is a filmmaker from Hong Kong with a particular interest in young people’s involvement in grassroots and social movements. After obtaining a degree in Policy Studies, he did not want to work in politics or become a government civil servant, and pursued a Master of Fine Arts in Film Production. His first feature-length film, Yellowing (2016), about the Umbrella Movement of 2014, was nominated for Best Documentary at the 53rd Golden Horse Film Awards, also known as the “Taiwanese Oscars”.

Tze Woon began his talk with a screening of his first two works. Both are short films playing with conspiracy theories – coincidentally, about water – and filmed in a mockumentary style.

The Aqueous Truth (2013) imagines a tranquiliser has been added to Hong Kong’s water supply to pacify the population, while Being Rain: Representation and Will (2014) hypothesises that the authorities were controlling the weather to curtail civil unrest, inspired by the fact that all important dates for protests that year were affected by heavy rain [synopses from the South China Morning Post].

Tze Woon cited works including English director Peter Watkins’ The War Game (1965) and Public Enemies (2009; based on a non-fiction account and filmed with partial historical and geographical accuracy) as inspiration for his “documentary way of telling a fictional story”. With hired actors playing policemen, but featured interviewees including real politicians, it was evident how audiences would have believed both films were documentaries. However, Tze Woon added, “I think they believed it is a documentary because they are in Hong Kong. They don’t quite trust the government.”

Tze Woon was asked about the theme of water in both films, and responded: “These are not actually films about water. They are films about Hong Kong”. Water, he shared, “is a natural thing. When you drink water, you don’t think about it, what is in it. If there’s something manipulating it, it’d be quite scary.”

Conspiracy Theories and the Growth of Documentary Filmmaking

While quite a lot of young, independent filmmakers in Hong Kong are making works related to the political situation in the city, the majority are making documentaries about social movements. As far as Tze Woon is aware, he is the only one making films about conspiracy theories. He shared:

“Before 2014, I tried to make a few fake documentaries. Conspiracy theories are very typical to the Hong Kong situation. After the handover (in 1997) from the British government to mainland China, there was supposed to be a “one country, two systems” policy in place. Before 2014, we believed in the constitution, the basic laws, that our freedom of speech would be protected as one of our core values. We believed we would achieve universal suffrage progressively.”

“But after the Umbrella Movement, we started to doubt, is this true? Is it just a lie? Something real [seemed to be happening] but behind, it was all fake. So I love this form, conspiracy theories, to present the Hong Kong political atmosphere.”

“People have started using more radical ways to fight for democracy. People use civil disobedience, occupying the streets, to try to push the government to react.” Previously, Tze Woon said, there weren’t very many documentaries made in Hong Kong. But “as the situation of the place is getting worse”, there has been an increase. He said there have been at least six to seven feature length documentaries recently made, mostly by his generation of filmmakers.

During the Umbrella Movement in 2014, Tze Woon was “initially going around with [his] camera”, and thinking about “what [he could] do for the movement”. He recounted that many people involved in the protests were taking a similar approach – for example, some on the front lines were there making art. He followed the film’s subjects for the whole duration of the movement, and deemed it a “very special experience”. In his view, audiences need not even have a political connection with the film or with Hong Kong in order to be moved by it: “Even people not in the Hong Kong situation can get into the story because it’s about young people”.

The protests were a catalyst in his turn to documentary filmmaking. He said, “Before 2014, I tried to make fake documentaries. After this, I really think that documentaries are a more direct way of participating. The political situation in Hong Kong is different now. After 2014, we started to not believe in the government even more. All the basic laws, the one country two systems policy, feels fake. So, we directly go to the street, protest, occupy. Documentary is a very good way for me to participate more.”

Tze Woon recalled that funding Yellowing was a challenge. He filmed with a small camera and the bulk of costs entailed were in post-production: for colour grading, music and sound mixing. In addition to grants, as “most creative industry people supported the movement”, they volunteered to help him as well.

It was also difficult to get the film into mainstream cinemas – dually challenging because it was not only a documentary, but also political. The release of Ten Years at the same time further saturated the already small market for such films. Tze Woon recounted that even Ten Years faced challenges staying on screens despite critical acclaim (it eventually won Best Film at the 35th Hong Kong Film Awards) and high audience demand. Eventually, street screenings in public locations proved to be the way forward for both that film and Yellowing.

Tze Woon mentioned two groups of viewers whose responses to Yellowing he found particularly memorable. The first was young people from mainland China. “Information from their media and in their education tells them that [the movement] is a bad thing for Hong Kong,” he said.  However, in watching the film, they see “similar age people risking their careers, futures, by getting arrested,” which provoked further thought for some.

The second group he highlighted was the very people who participated in the movement. Tze Woon felt sad for them, as “they whole-heartedly participated – those in their early 20s, university students. It was the first time they’d taken part in a social movement. But they didn’t achieve anything.” But he remains hopeful: “They were disappointed and didn’t want to look back. But this film is a way back for them to rethink what happened in 2014, and to start again.”