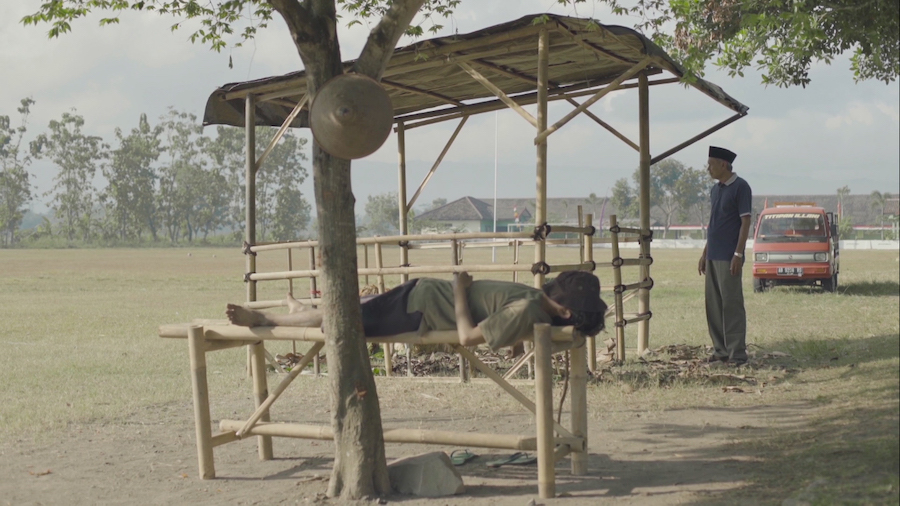 Makbul Mubarak is a critic-turned-filmmaker based in Indonesia. In the Objectifs Film Club session held in July 2022, he spoke about his filmmaking journey and his short film The Malediction with Leong Puiyee from Objectifs. A tale about the surreal experiences of a pious Islamic man who desires to marry a second wife, The Malediction bagged the Indonesian National Award for Best Short Film and a special mention at the Singapore International Film Festival in 2018.

Read on for a recap of the conversation, which has been edited for brevity.

Images that sparked The Malediction

Makbul began writing The Malediction in 2015. An image in his mind that spurred the film then was that of a dying man surrounded by people. It was only after some time that he associated it with a painting. He said, “Only after I finished The Malediction did I realised it was actually based on a painting by Rembrandt titled The Anatomy Lesson of Dr Nicolaes Tulp.”

The Malediction was also inspired by an observation Makbul made of his dad in a fish market. He recalled, “My dad is a very religious guy. He teaches Islamic philosophy to high school students in our village. He has managed his livelihood from being an imam, the leader of the village. But in that fish market, I saw him glancing at some girls passing by. At that point, I was like, ‘Oh, there’s a glitch! He is a normal person. He’s like me.’”

“I started to work thematically,” Makbul continued, “Like, how do I thematically approach these images?”

Motivations in making the film

As Makbul noted, people often focus on what religion prohibits when talking about it. What’s interesting for him too however, is how religion allows people “to do things that are unimaginable… And one of those things in my neighbourhood or community is taking more than one wife. It’s frowned upon, but it’s not illegal.” 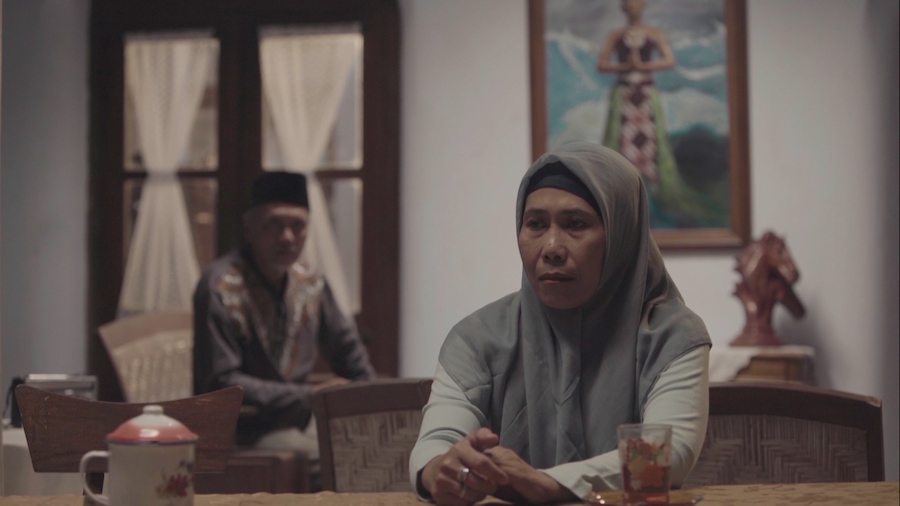 Makbul also shared about workshops held by “polygamy gurus,” or men hailed for being able to successfully ‘manage’ their multiple wives. He said, “It’s like you can pay to join their workshops on how to become a womanizer.” Makbul himself attended such workshops when researching for The Malediction. In these workshops, religion was brandished as the reason behind the cultural practice of polygamy and jokes about sex were made. He recounted his experiences, “After ten minutes of reciting all the technicalities and concepts (related to polygamy), there would be ten seconds of relieving the situation with very masculine jokes. And everybody would laugh. It’s very sobering. It’s like, religion covers every motivation.”

Besides attending these workshops, Makbul also talked to both men and women in such unions to understand their perspectives. According to him, the key reason why women agree to be a man’s subsequent wives is to ensure that their families are provided for. As he said, “You can feel that they are looking for stability in their life, more so than the figure of a husband or partner. It is more out of an economic reason. After their marriages, they get their own houses, because usually, different wives live in different houses. It’s like, Raise the Red Lantern (dir. Zhang Yimou), Islamic style.”

On the other hand, men in polygamous marriages would cite religion as motivation for their behaviours. Makbul explained, “For the men, it’s all religion. Like, they are doing this to help others. It’s social charity. They would say that there are more women than men in this world, so one man has to take care of more women for the civilisation to carry on. It’s not about their desire.”

These perspectives and experiences informed Makbul’s exploration in The Malediction. He asserted, “I wanted to tell a story from the point of view of men. Like, if a man can have all that he desires, can he live with that?”

“The film clearly says that a man cannot hold the weight of all his desires,” he added. “It is a way of criticising the cultural practice from the point of view of men, and not just of women. From a feminist’s view, it is of course problematic. But can we also problematise it from the point of view of straight men, which constitutes the majority of men? That’s what the film tries to put forth.”

Javanese mythology in the film

A key symbol in The Malediction is a painting of a female spiritual being. Makbul explained that he was inspired by animistic beliefs in Indonesia. More specifically, he was drawn to Nyai Roro Kidul, a figure who rules the Indian Ocean according to Javanese mythology.

“I started the film in a macho way, but I wanted to end it in a feminine way,” Makbul said. “I was looking for another religion, and I found a figure called Nyai Roro Kidul. People fear her. Everyone in Jogjakarta believes that this Queen of the Southern Sea loves green, so they never wear green to the beach. There are countless paintings of her in Indonesia. She’s like the Medusa of Javanese culture. That’s how the painting in the film came about.” 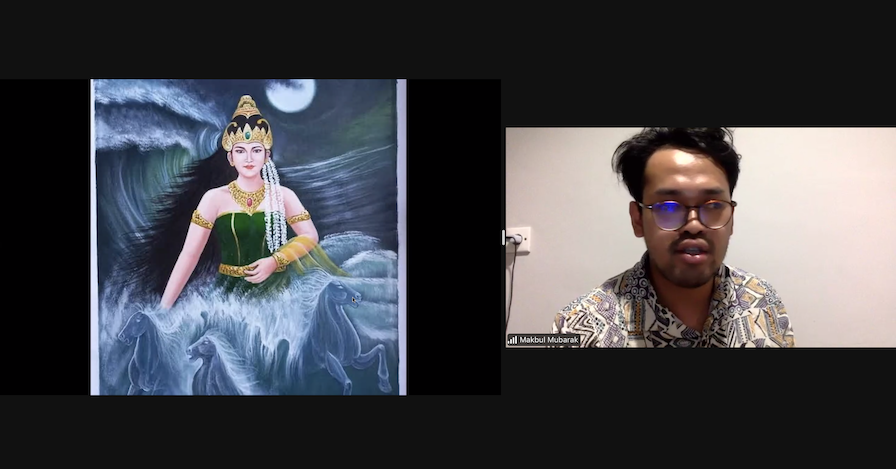 While inspired by Nyai Roro Kidul, the figure in the painting in The Malediction however, is not of the supernatural being herself. And Makbul’s decision not to explicitly feature Nyai Roro Kidul stems out of a respect for Javanese beliefs. This regard similarly influenced his decision to change the ending of the film subsequently, from a scene that took place at the beach to one that occurred at a mountain.

On magic realism and symbolism

When discussing his filmmaking approach, Makbul shared how the style of magic realism is prevalent in several Indonesian artworks, even if their creators may not call it as such, as it is a term associated with works from Latin America. Examples of such Indonesian creators include writers Ahmad Tohari and Eka Kurniawan.

Makbul reflected on his use of symbols in The Malediction as well. According to him, when he was working on The Malediction, he believed a lot in symbols, perceiving them to give “audiences a puzzle to unravel.” When he was writing his first feature film Autobiography more recently however, he tried to use a different narrative device to tell the story. Doing so is his way of learning and growing as a filmmaker.

Transiting from a film critic to a filmmaker

Makbul was a film critic before he made the switch to be a filmmaker. For him, the craftmanship entailed in both domains is different. As a critic, he sought to create through his writing, “a social and cultural environment” for each film. He thought about questions such as how a film could be important to the public.

Filmmaking however, “is a much more egoistic, egocentric process.” As a filmmaker, he has to ponder about what is important to him. This was something he initially felt uncomfortable with. He said, “In the beginning, I was very shy. But as a director, you have to learn about yourself and your experiences. Because when you pitch your story to others, people want to know why it is important to you.”

Makbul further expressed gratitude towards writers who reviewed his films. He said, “I always take criticism as an act of kindness. People are very kind to watch your film and spend time writing about it. They are giving a cultural frame to your film and share it with people. And for that, I’m very grateful.”

The talk ended with Makbul giving a short introduction of his upcoming feature Autobiography. The film reflects on life in Indonesia after the military dictatorship ended, while exploring the relationship between a housekeeper and the owner of the house. It is likely to be released in Singapore at the end of 2022.

Recap by Ng Hui Hsien, July 2022.
You can also read our past Film Club recaps here.