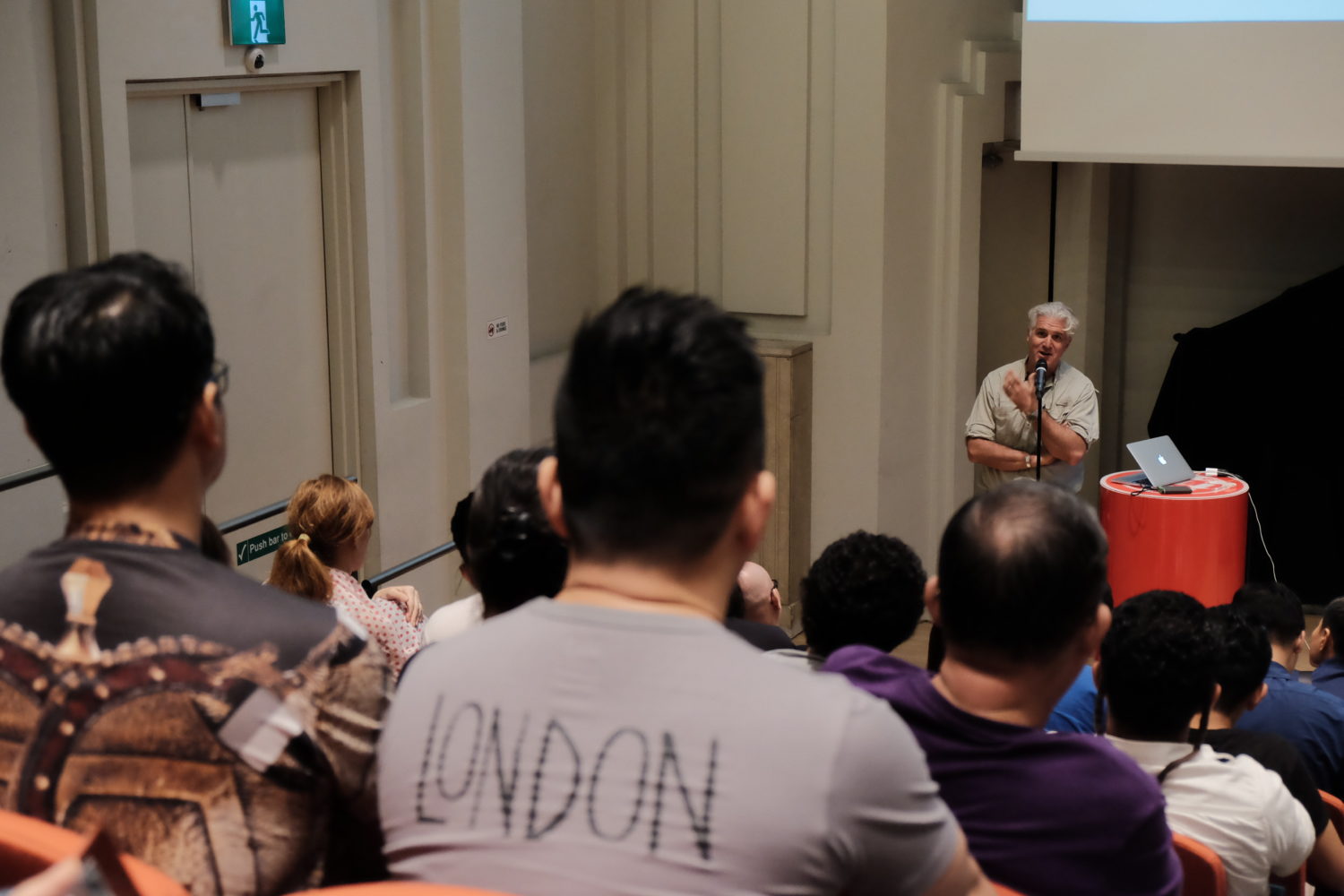 A public lecture by the photojournalist and VII Photo cofounder

In addition, Knight gave a public lecture in which he shared his experiences as a freelance photojournalist through years of change in the global media industry and his insights acquired as a cofounder of VII Photo.

Read on for an overview of Knight’s talk.

In just over an hour, Knight took the audience on a chronological journey through his 30-year career spanning more than 90 countries. He highlighted how each ‘chapter’ marked a key milestone in his growth as a photojournalist.

Knight began his career as a freelancer in Cambodia in the late 1980s. He credited this period with teaching him many fundamental lessons about both photojournalism and about himself. “Many immaturities I had then were actually strengths”, he reflected.

Among the lessons he highlighted were:

This intense phase of Knight’s career saw him gain representation by agent Marcel Saba, and travel to over 80 countries for work. “Responding to situations was exhilarating”, Knight recalled, but he faced the challenge of “starting to lose [him]self in the matrix of magazines”. Unlike the freedom he had as an emerging freelancer in Cambodia, his primary commitment now had to be “the experiences of people reading the news”.

Knight met two influential people during this period. The first was Rod Nordland, then a foreign correspondent at Newsweek, from whom Knight learnt “the politics of how the news desk worked”. Together, they started to pitch longer form projects to the Newsweek editorial desk.

The second was the French photographer Gilles Peress, who simply “rearranged [Knight’s] equipment”, and in so doing, rearranged Knight’s perspective. It was obvious to Knight that Peress had a unique point of view: “I couldn’t see what he was seeing.”

A key takeaway from this part of Knight’s lecture was that an adaptable freelancer survives by learning, unlearning and relearning. In this stage of his career, Knight transformed from being a “utility photographer” to becoming an “author”. He readjusted his relationship with both photography and his clients.

Reflecting critically on his past coverage of conflict, Knight felt his work “had no historical value other than to say the war happened”. “It lacked any sense of urgency, and advocacy — it should have had both,” he said.

In covering war crimes in Kosovo in 1999, he wanted to tackle them in an “adversarial, not passive” way, and saw an opportunity to use all the skills he had thus far acquired, to do more than simply illustrate. As he was documenting “things that had taken place, not that were taking place”, he was able to operate almost like an investigator rather than a journalist, and for the first time could really immerse himself into a single narrative.

Knight acknowledged that the creation of VII Photo was a direct result of working in Kosovo.

In covering the American invasion of Iraq, Knight faced yet another shift in his career: the use of digital cameras. They were more than just a new gadget with a plastic lens; they also changed the way he made photographs and worked on stories. Publications wanted him to file pictures with much greater frequency — almost daily. As photojournalists on the ground, Knight and his colleagues had certain expectations about how their images and reportage would appear in publications, but they ultimately did not have control over editors’ choices.

In addition, he was becoming increasingly aware of the emotional and mental toll that extended exposure to such violence was inflicting upon him. Ultimately, Knight reflected, “perhaps the only photographers who could ultimately photograph the civilian experience” without risk of glamorising it “were Iraqi photographers”.

This confluence of factors led Knight to seek a break from conflict journalism. The success of VII Photo reinforced his belief that “if you can’t find what you’re looking for in any space, make it for yourself”. Knight then co-founded the Angkor Photo Festival & Workshops in Cambodia, which runs till today.

With two friends, Knight founded a publication, Dispatches, as an “antidote to the kind of journalism we were getting fed up with”.  In photographing in the Dharavi slum in Mumbai, India, for an issue on poverty, he thought carefully about representing the issue and the residents in a way that reflected their industry and initiative. He returned to documenting “the mundane and the ordinary” with great respect, as he had learned back in Cambodia.

Catching us up to the present, Knight shared that a lot of images for his projects on immigration in the US and on minority tribes in Asia continue to “provoke you to think what’s outside the frame”. He ended his talk by reiterating the value of “seeing differently” in order to understand each other better.

Visit Gary Knight’s website to learn more about his career. 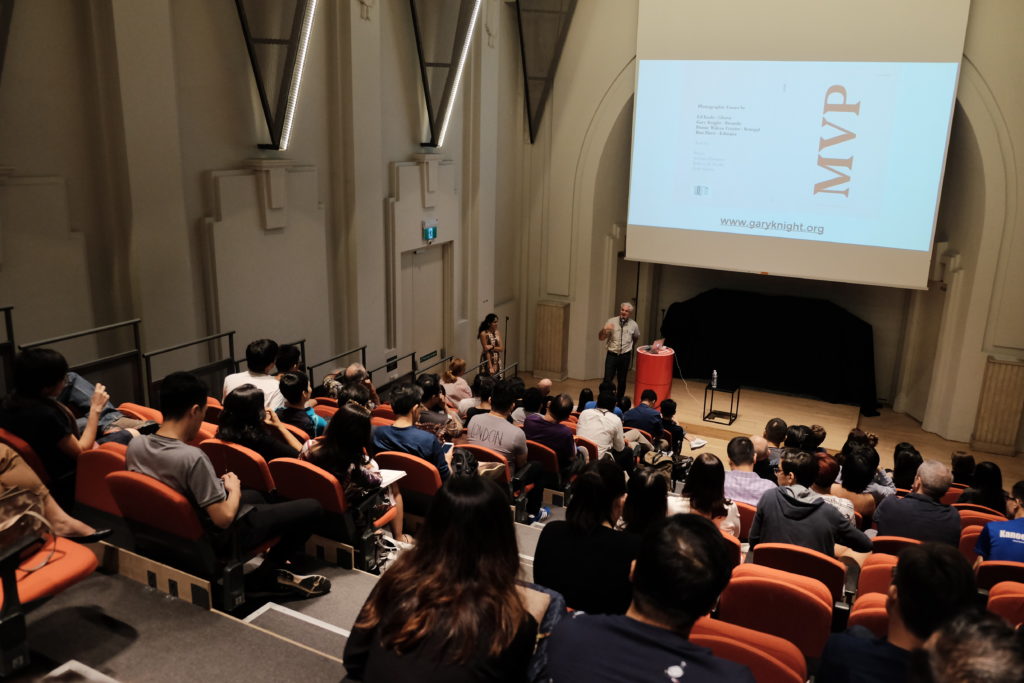 Gary Knight takes the audience on a journey through his 30-year career as a freelance photojournalist. 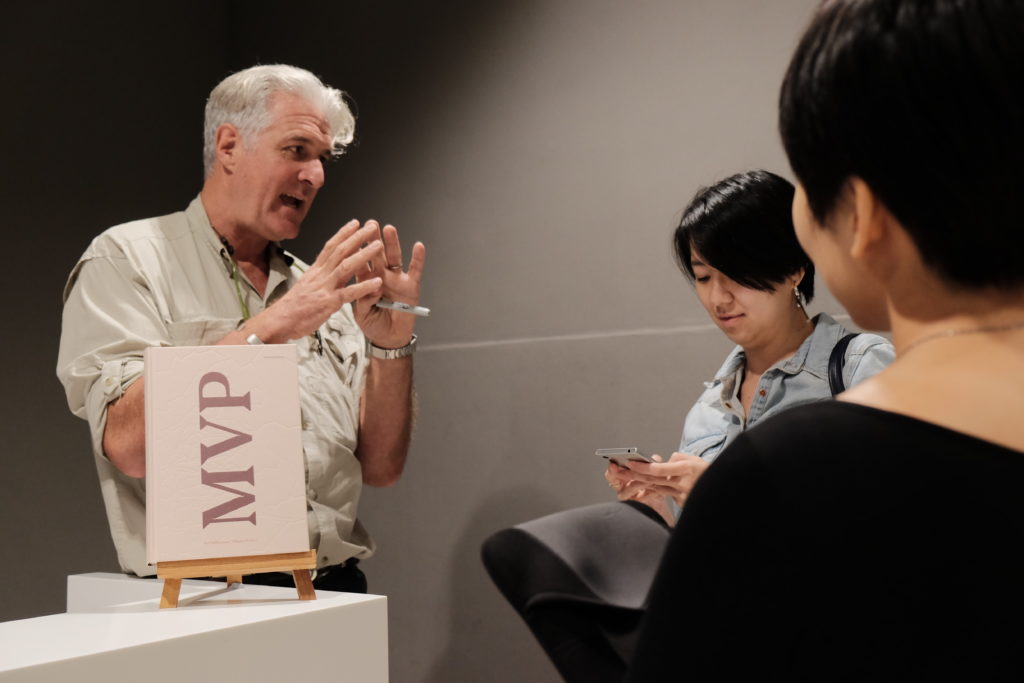 Gary Knight speaks with audience members after his public lecture. Copies of the featured publication, MVP, are available for sale at Objectifs.