Sajeev Photo Studio: A Decade of Portraiture in Little India is a photographic installation that at first glance, presents the story of one traditional photo studio. Through it, we examine the changing roles of the photographic portrait and photo studios, and some of the facets of the Singaporean, Singapore immigrant and migrant worker story. 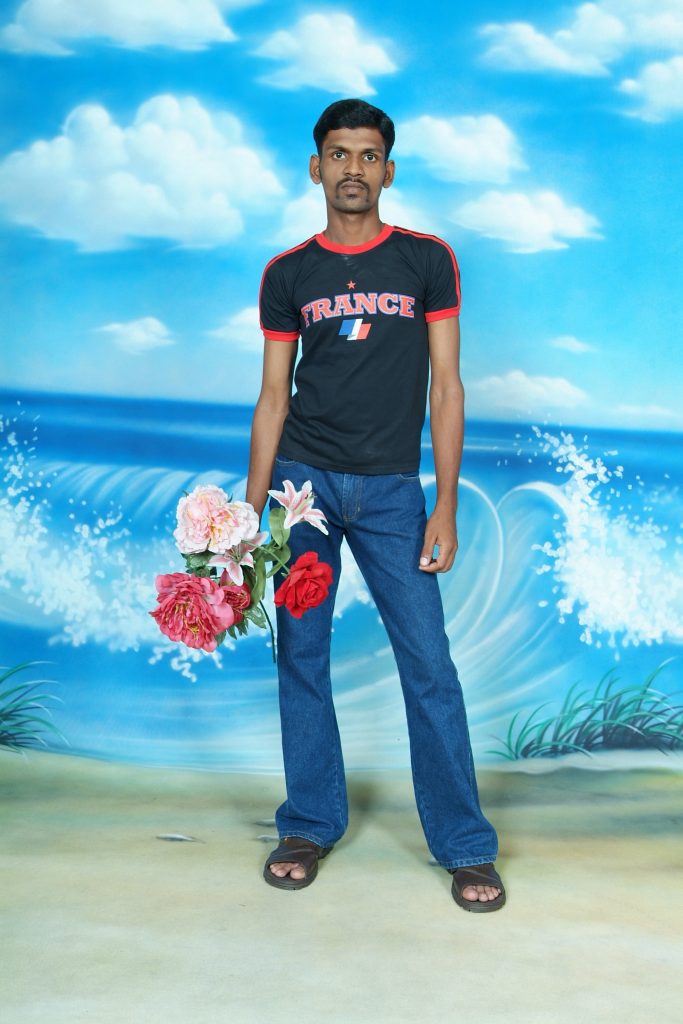 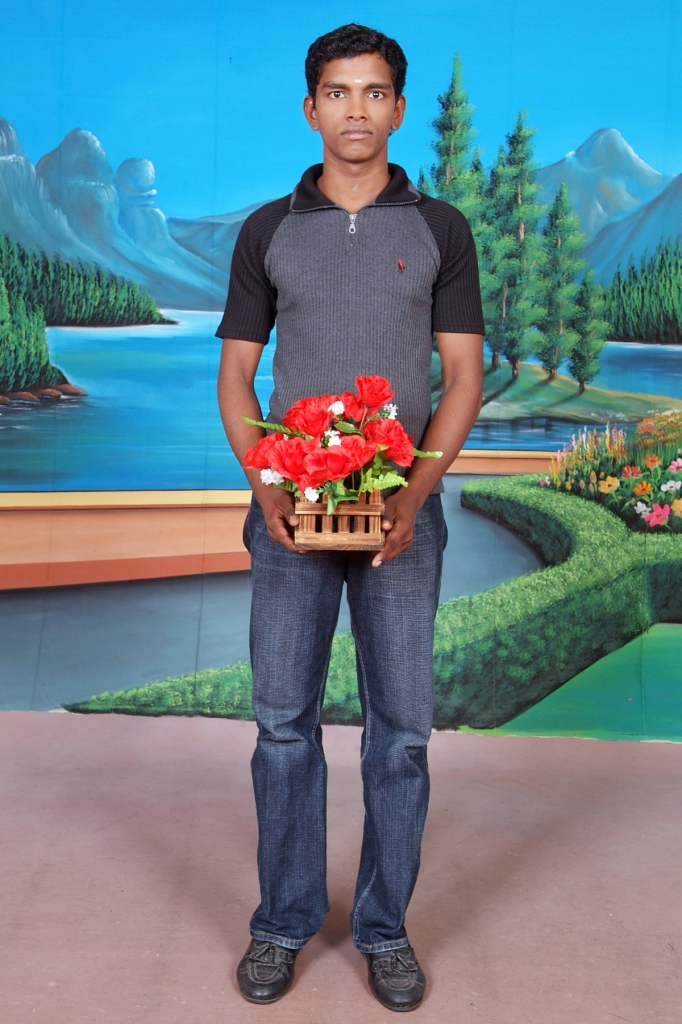 On a little street called Kerbau Road in Little India, stands Sajeev Digital Photo Studio, a quaint little photo studio run by 49 year old photographer K. Sajeev Lal with his wife Sheeja Shaj. For the past 13 years, young male foreign workers from Tamil Nadu and Sri Lanka, one or two years into their labour contracts in Singapore, flock here to get their portraits taken by Sajeev. They have a choice of traditional scenic backdrops or new digital backdrops of Singapore and its icons montaged by Sajeev. Once dressed, posed and photographed, the portraits are then sent, in the old days in 4R/5R prints costing $15–20, to the young men’s parents back home in South Asia to look for brides. “Now they all want digital files. The internet and email are now popular. They give us their email and we send the pictures to them.” Sheeja mentions. The photo studio went full digital in 2006.

I asked Sajeev how many of the young men he photographed found wives. “100 % success rate.” He replies with a smile. “They all find wives. They go back for their weddings and sometimes come back with their new wives for a couple portrait again at my studio.”

Business has dropped almost 60% since the Little India riot incident on 8th December 2013 and the subsequent clampdown. Sajeev’s studio is located just around the corner to where the incident took place on Racecourse Road. “They used to come here every weekend and meet their friends. Eat, drink, chat and then come take pictures.” Sheeja Shaj said, “Now they have stopped coming. Before you couldn’t stand in here because it was so full of people queuing. It has improved a little recently, but still very bad.”

Sajeev was born in Singapore in 1966 but left at 3 years old with his elder brother to be with their mother in Kerala, India. He later returned at 15 with his brother when he was called back to serve his National Service. It was then he taught himself photography and later took up a course at SAFRA. He bought his first Yashica camera and began his 34 year career as a photographer. His first digital camera was a Nikon D200. And like the many men he photographed, Sajeev himself went back to India to find a bride. Sheeja Shaj was a neighbour in Kerala and they have now been married for 23 years. 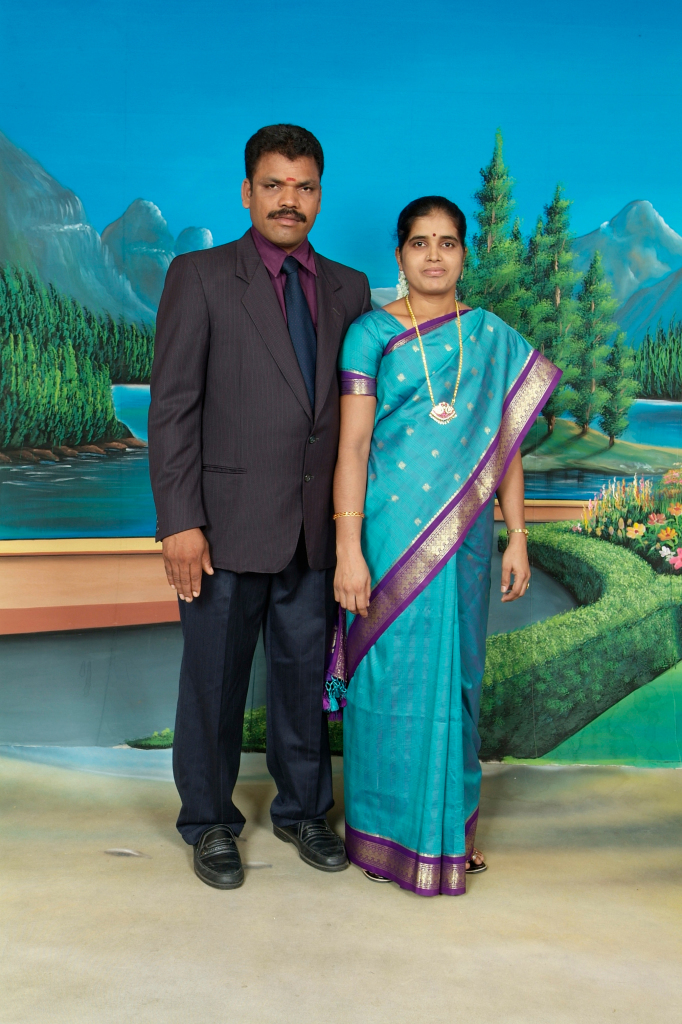 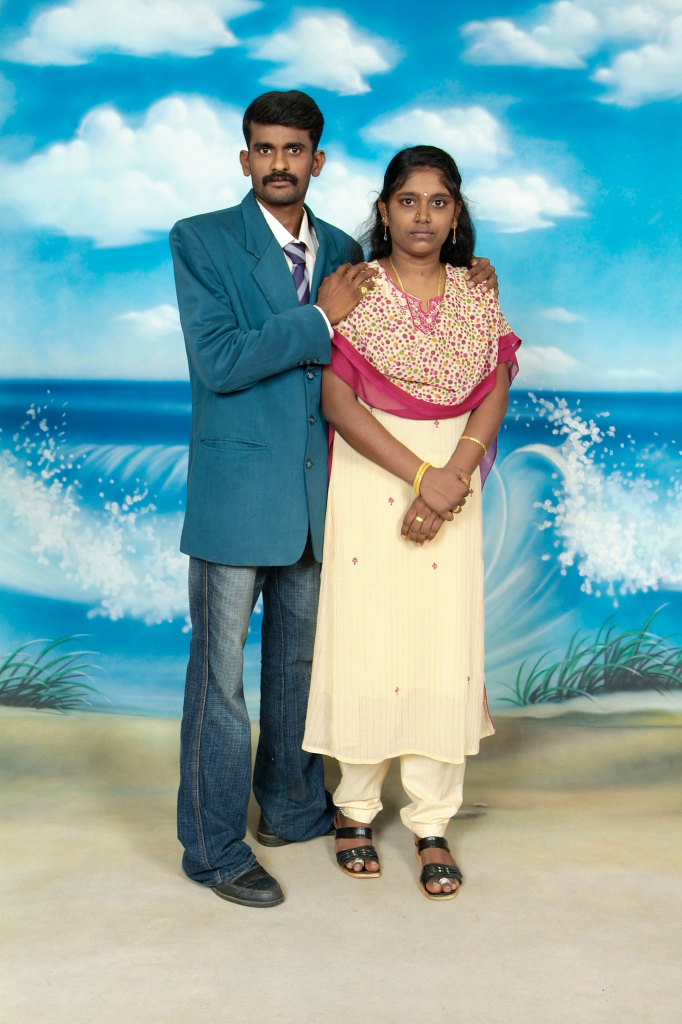 Exhibition Studio Photo-taking Sessions
As part of the show, we will be taking portraits (in a similar fashion to those shown in the exhibition) with one of the backdrops from Sajeev’s Photo Studio. Participants will be emailed a copy of their portraits. Come by – pose alone or with friends – in our exhibition studio sessions for portrait-taking on a first-come-first-served basis!
Tue: 4 and 25 Aug, 5pm to 7pm
Sat: 1, 15, 22 and 29 Aug, 2pm to 4pm
Wed: 12 and 26 Aug, 1pm to 3pm
In conjunction with the Singapore Night Festival: 21 and 22 Aug, 8pm to 1030pm*
*Only these studio sessions will be photographed by K Sajeev Lal. All other sessions will be shot by assisting photographers.

The studio portraits are free, but we are accepting pay-as-you-wish donations. All proceeds will go to HOME (Humanitarian Organisation for Migration Economics), a charity dedicated to upholding the rights of migrant workers in Singapore.

Artist & Curator Talk
19 Aug (Wed), 730pm to 830pm
A sharing session by K. Sajeev Lal and Sheeja Shaj, from Sajeev Photo Studio and Kevin WY Lee.
The talk will be followed by a studio session with Sajeev.

Zakaria Zainal
Zakaria Zainal makes meaning of the world through his photographs. His first monograph, “Our Gurkhas: Singapore Through Their Eyes” is an anthology of portraits and anecdotes of the retired Singapore Gurkhas as they reminisce about life in the Lion City, from the 1950s till today.

Danny Santos
Danny Santos is a professional photographer specializing in portraiture, documentary, corporate, and commercial photography. He started as a hobby a few years ago, shooting strangers in the streets of Singapore every weekends.

Sean Lee
Sean Lee‘s first body of work was Shauna, made between 2007 and 2009. This work was nominated for the Prix Découverte on the 40th anniversary of Arles Photography Festival. Since then, Sean has gone on to make other stories.

Born in 1966 in Singapore, Sajeev spent his formative years in India before returning to Singapore in 1981 to serve his national service. As a self-taught photographer, he started doing part-time photography to earn money and started shooting for organizations like Sree Narayana Mission and Gurukulam. Later, he joined the SAFRA photography club to further develop his skills. He now runs Sajeev Digital Photo Studio in Little India with his wife.

Kevin is a photographer and creative director based in Singapore. He has worked as a creative professional in Australia and Singapore for over 15 years. In 2010, he founded Invisible Photographer Asia (IPA), an organisation which has since grown to become a leading, influential platform for Photography & Visual Arts in Asia.

Kevin participates actively in arts and photography across the region as a practitioner, producer, editor and in curation. Some of these include events and workshops across Asia, including the IPA Photo Workshops, the Invisible Photographer Asia Awards, and the IPA Photo Books Show, Southeast Asia’s first Photobook Festival. He is also a curator and nominator for various festivals, awards and recognition programs, including the Prix Pictet Award and PhotoQuai this year. He has also served as a jury for various other programs including Singapore Creative Circle Awards, The Big Picture Contest, Angkor Photo Workshop, and Kuala Lumpur International Photoawards.

Invisible Photographer Asia (IPA) was founded in 2010, and since then has grown into a leading and influential platform for Photography and Arts in Asia. IPA champions Photography in Asia through talent showcases, events and exhibitions, publishing, workshops and education and community outreach. Since its inauguration, IPA has partnered with organizations such as PLATFORM.SG, National Museum Of Singapore, The Angkor Photo Festival,  KL Photo Awards, AO Photo Books (Hong Kong), SONY Electronics Asia Pacific, Leica Camera Asia Pacific, Epson Singapore, and Awagami Factory Japan to name a few.

With the support of 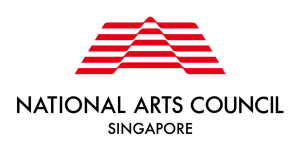