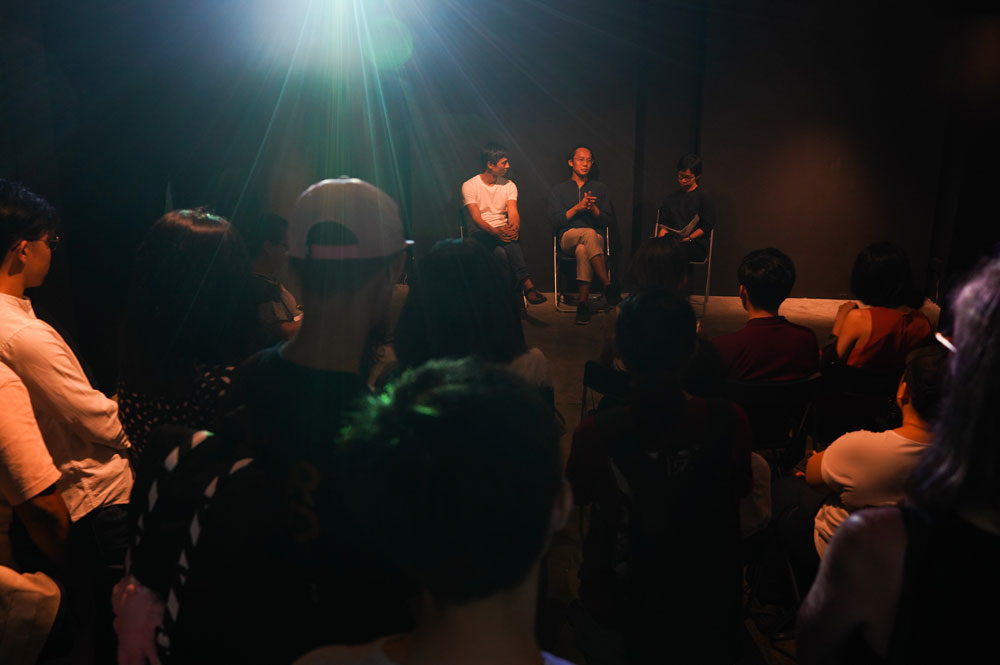 ARTIST TALK WITH DAVE LIM AND IAN TEH

ARTIST TALK WITH DAVE LIM AND IAN TEH

Read a recap of the artist talk for The Believers, an exhibition by Dave Lim, the recipient of the 2019 Objectifs Documentary Award, Emerging Category.

The session is a dialogue between visual artist Dave Lim and mentor Ian Teh on the process of working on the project, moderated by the Programme Director of Objectifs, Chelsea Chua. The discussion has been paraphrased for brevity.

Dave: I came from a very atheistic background and I was very cynical about religion. Whilst shooting for Religious Procession (my previous film), I followed a Taoist temple for a long time. I encountered a group of Malay boys who sought my help as one of them was in a trance. I had always felt that trances were staged, but there is no way this group of boys could have been connected to the Taoist temple. That experience made me want to shoot something that mapped the idea of my perspective shifting from one of cynicism to an understanding, apathetic view of religion. This film is the product of that.

Chelsea: One of the things we found compelling about The Believers is the juxtaposition between secular and religious behaviours. What made you select certain sequences and put them together?

Dave: This film is essentially a result of an archive, comprising of various footages I had shot and categorised. I made a decision to select more optimistic yet intriguing scenes that one would not be able to access on a daily basis. I decided to bring in the everyday because I felt that normalising the activities involved in the rituals maps on to how I started to see these practices. While I might not exactly understand the beliefs or value systems tied to someone else’s practices, I can at least start to understand by them through the way the participants are so fervently involved in the practices. This became the basis for my film.

Chelsea: Could you share more about the process of working together?

Ian: One of the concerns I had when I was looking at Dave’s work was that I primarily work and edit in stills. If Dave was very comfortable with and proficient at the technical aspects of the moving image, would he be just happy with me being involved in the intellectual process, the conceptualisation of the project, and the rigour of thinking through the ideas? When he was sending me his edits, it really struck me how the way he captures these moments is not too dissimilar to what I do, because he would often decide on a point of view, and run the film after placing his tripod and framing his shot. This process is very much how a stills photographer would work. However, from his footage, 10 decisive moments could emerge from a 30 second cut. While this is similar in many respects to the way we would work in stills, with stills you choose one single moment. As a photographer you’d be shooting 20 frames in order to choose later which one is important to you. Dave’s footage is literally almost a bubbling of different moments erupting, and this was fascinating because it was like being able to study an event unfold. Dave’s studied capturing of events unfolding was very unlike a regular movie where the camera is always moving, and to me, this was what helped to bridge the gap between stills and the moving image.

Chelsea: Tell us a bit more about the formalistic tone that you were using purposefully for this film.

Dave: I happened upon the formalistic tone and stuck to it –  the meaning came after. In part, this approach allows you to be very involved in someone else’s activity, while embodying a language that levels the ground, allowing you to see everything in the same perspective. This also helped me think about how I need to shift my position if I am unable to obtain a certain angle.

Chelsea: What I enjoyed about The Believers is how the stillness of this film helps us appreciate the kind of activity that goes on in the film. I’ve seen this film so many times but each time I look at it I notice something new about the scene, and this makes this such a rich film.

Dave: For the past 30 years, everyone has been saying that fly on the wall documentary is dead, but I think it’s only dead if you have an end point in mind. This film is more about a process rather than an end point – that ritual of you watching the film is the same as the ritual of the actions that people are doing in the shot itself. That sort of introspection and the audience needing to be vacant and empty when watching this is extremely important and demanding.

Chelsea: Could you tell us a little about the process of working with Ian on the editing of this film?

Dave: Ian has been the most visually literate and the most concise in explaining ideas. When editing my own films, I don’t spot the similarities, because I am unable to divorce the footages from the facts, events and times that they exist within, which I had experienced in the process of shooting them. However, from the viewers’ perspectives, these facts are not as important vis-à-vis the visual information that you are obtaining from the actual footage. Beyond the events contained within each shot, I needed to think about how the shots flowed from one to another. Ian was very helpful in providing this perspective.

Ian: You also suffer from the fact that you are so close to the work. You need time to digest the film before we can have a conversation about each cut. We had back and forth discussion, which I felt was really important to the process of developing this work.

Chelsea: In the process of thinking about the project and the different ways of presenting it, could you tell us how you arrived at this decision to create a single screen presentation?

Dave: At times I feel anxious that The Believers is a single screen installation, as the gallery is rather spacious to merely host a single film. I have previously tried to make a two channel film, where meaning would be created through the spaces and montages. However for this film, I tried to compress the spaces between the spaces of rituals, behaviours, and activities. This compression forces us to deal with the montage and decide what is similar or different, and what runs through as a single thread. Does the film then become a sort of typology of rituals? Chelsea and Ian had shared some valuable insights that helped me decide on the format as well.

Chelsea: When looking at the work, I was clear about your intention and what you wanted to communicate. If you had broken the work up into multiple screens, be it moving or still, what would you be saying by doing these extraneous things? I feel the work is stronger when you have something to say and you are able to hold the audience’s attention that way.

Chelsea: Could you share the reactions of people who have seen this film?

Dave: Given that a lot of the film is devoid of its factual context, people tend to be curious about where and what the scenes are, and whether they were shot in Singapore. A lot of people did not know that all these rituals existed within this tiny island. All these rituals exist concurrently, while we live in our own separate spheres. To try to come up with a common thread, a common humanity of sorts, was the idea behind this work. This is the optimistic perspective of this film, though I do think that the common thread could also become pessimistic very quickly.

Dave: I had to consciously capture moments whilst on location, but sometimes I only realise the moments I chose are not the right fit later on in the editing room. Heading to any location, the formalistic angle helps me think about what will or will not work and whether there is a better way I can capture the moments I wish to include. For instance I had captured permutations of the climate change rally with people lying on the ground. I made a conscious choice to capture these permutations while I was shooting but I still had to decide on the right sequences to include back in the editing room.

A question from an audience member: Could you share some stories that you did not include while putting together the film? My impression of The Believers is that it is very much about spectacles. It’s also about people who have really invested in the rituals. You’re kind of photographing the aftermath of belief.

Dave: There are stories that I did not include that I wish I could have. However, the film has to make sense at the end of the day, and editing is a cruel process.

Ian: I was concerned about how to sustain attention and suspense such that it will take the audience from the beginning to end of the film, while simultaneously leaving space for ambiguity that allowed the audience to figure out the connections that are being made through the various scenes. What was common with the religious and secular scenes is that they were ritualistic. At times, some subjects are constructed in certain ways that were much further from the idea of rituals. It would have been confusing to the story had those scenes been included, and it is ultimately about cutting it down to fit what you are trying to convey.

A question from an audience member: What are some of your favourite moments or scenes in this film?

Dave: Several of my favourite moments were due to the intensity of the scenes, while others were due to the stories and an experience of the distant practices that I would not have been able to encounter if not for this film. One example is the scenes at the Sikh temple. It was amazing to be granted the opportunity to access a space that certain communities consider holy or sacred and to be allowed to film at an angle that some of the communities might have considered as intrusive to their practices.

The Believers  continues at Objectifs till 19 Apr 2020. Join us for In Believing, We…  , a screening of Singapore short films curated in response to The Believers. This session includes be a post-screening discussion between Dave Lim and the featured filmmakers, Adar Ng and Kray Chen. In light of recent developments in the COVID-19 situation, kindly note that this screening has been postponed, new dates TBC.

While at our space, be sure to visit Pantura, an exhibition by the recipient of the 2019 Objectifs Documentary Award, Open Category, Rony Zakaria, and stay tuned for the artist talk between Rony Zakaria and curator Wei Leng Tay.

The Objectifs Documentary Award champions our mission to broaden perspectives through image making, by supporting original voices in visual storytelling in Singapore and the wider region. The Award enables photographers to work on new or existing projects, encouraging them to discover and tell stories about their native communities. It welcomes different creative approaches to non-fiction storytelling, from conventional documentary photography to visual experiments.

Objectifs is accepting applications for the 2020 Objectifs Documentary Award, which is open to image makers in Singapore and Southeast Asia. Please click here to view more details.