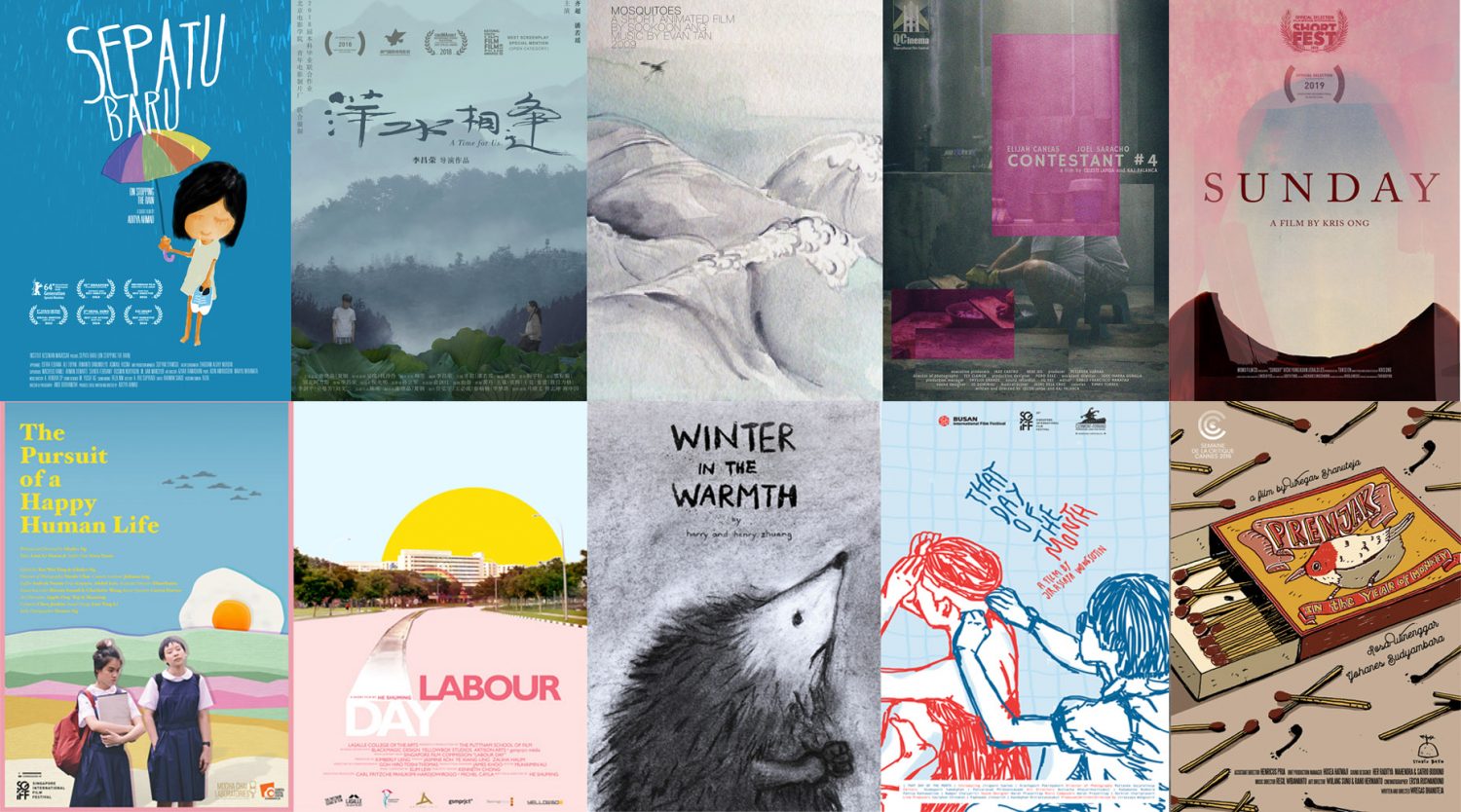 Celebrating the richness and diversity of Southeast Asian short films

Welcome to Objectifs Cinema: Now Showing, a celebration of the richness and diversity of Southeast Asian short films. It is an exhibition that hopes to gather film lovers of all backgrounds through screenings, talks, sharing sessions, and a film memorabilia showcase. It aims to set the stage for deeper discussions and a broader understanding of short films from the region.

The short film format has long been a playground for alternative forms of expression, and has become one of the key ways in which filmmakers and artists in Southeast Asia have explored new visual languages and ways of sharing lived experience. It is cinema that resists and transcends geographical, historical, and artistic boundaries, that brings people together while beholding its uniqueness.

As a space that champions Southeast Asian stories, programming, promoting and nurturing the development of short films is integral to Objectifs. Since the early years of its founding, it has been affiliated with the region’s film scene as a producer, exhibitor and distributor. These shifts reflect the efforts of an independent arts centre to respond to the changes in how short films have been made and seen, and the importance of making space for this vital art form.

Films from the Objectifs Film Library will be screened over the course of this exhibition. The specially curated line up will be refreshed regularly. More information below.

The films screened at the exhibition and more can be rented for a small fee via the button below. Your support goes a long way in championing filmmakers from Singapore and Southeast Asia!

How are films shaped by socio-political forces, and how do they affect our sense of agency in return? The films in this programme showcase the myriad ways in which filmmakers in the region are commenting and reacting to national, societal and cultural phenomena. They are an invitation to think more deeply about the world around us, by generating empathy and inspiring change.

On the night of 22 May 2014, the military junta declares yet another coup d’état in Thailand. A camera steadily observes the inhabitants of a block of flats as they go about their nightly routine. Night Watch chronicles the mundane absurdity of a country where political upheaval and military coups have become almost routine.

How Green The Calabash Garden Was by Truong Minh Quy / 15 min / Vietnam / 2017
In a lush calabash garden, a Vietnamese veteran recounts the horrors of the Cambodian genocide to filmmaker Truong Minh Quy. As they recreate the grim memories in simple line drawings, they unearth psychological and emotional traumas that have laid buried for decades.

Vanishing Horizon of the Sea by Chulayarnnon Siriphol / 24 min / Thailand / 2014
Chulayarnnon Siriphol unravels the memories of his grandfather, a naval officer, through a singular, obsolete medium: VHS video. He crafts a visual poem delicately probing the various, disposable ways that a memory can be stored — in tapes, in photographs, in the mind. Beneath lies a layered tapestry of loneliness, hope and reverence.

Bura by Eden Junjung / 12 min / Indonesia / 2019
In the thick of the 1998 political turmoil in Indonesia, the small town of Banyuwangi in East Java is terrorised by rumours of masked ‘ninjas’ who are assassinating Muslim clerics. As the heightened tensions take hold, Muslim scholars (santri) patrol the woods at night, while a young santri leaves his post to meet with his lover.

Katong Fugue by Boo Junfeng / 10 min / Singapore / 2007
Set to a piano rendition of Bach’s Fugue, a mother reflects on her distant relationship with her closeted gay son through photos and mementos in her son’s bedroom. Katong Fugue is an adaptation of a play of the same name by Alfian Sa’at.

Jodilerks Dela Cruz, Employee of the Month by Carlo Francisco Manatad / 13 min / Philippines / 2017
At a gas station in Manila, employee of the month Jodilerks Dela Cruz is beginning her last day of work. Against the backdrop of President Rodrigo Duterte’s war on drugs and a police force with a shoot-to-kill policy, Jodilerks contemplates her future as the bleakness and anxieties of a city on edge swirl around her.

Southeast Asia might be easy to define geographically, but its borders contain a polyphony of stories and voices. This lineup of films is a brief survey of works by filmmakers both established and emerging, who touch on personal stories and wider issues, and whose approaches range from the comical to the bittersweet.

Fonzi by Kirsten Tan / 24 min / Singapore / 2010
A metatextual world-within-world story, Fonzi is the tale of a film character who, like Pinocchio, wants to be a real person. Except Fonzi takes it one step further, and believes herself real, when she isn’t.
Three Wheels by Kavich Neang / 20 min / Cambodia / 2015
On a lonely night, tuk-tuk driver Nath meets a woman who reminds him of his past. When he returns home, he confesses to his wife that he wants to move. This realisation reveals unspoken realities of their marriage, which took place during the Khmer Rouge regime.

Quadrilaterals by Martika Ramirez Escobar / 17 min / Philippines / 2017
Quadrilaterals is about a family of Overseas Filipino Workers in Manila. Prisco Escobal, the breadwinner of the family, has worked in Saudi Arabia for almost three decades. At 65, Prisco is finally back home with his wife, while their four children have followed their father’s footsteps of working overseas.
South of South by Tan Chui Mui / 11 min / Malaysia / 2005
In 1982, Kuantan, Malaysia, a crowd forms at the beach where a boat that has been set on fire. A Chinese family sits down for dinner before being interrupted by Vietnamese refugees who have appeared at their door.

Sweet, Salty by Linh Duong / 19 min / Vietnam / 2019
40-year-old grandma Ha is pregnant and living with two apathetic daughters. Sharp-tongued and fiery, she has decided to confront her husband’s mistress, egged on by her friends and her mother. But when the clash goes awry, Ha is left with a bittersweet realisation.

On Stopping the Rain by Aditya Ahmad / 14 min / Indonesia / 2013
A young girl rages against the never-ending rain preventing her from wearing her new shoes. She decides to counter the forces of nature with an ancient ritual. But for that, she needs a very particular piece of clothing.

This selection showcases works by filmmakers and artists who frequently use formal explorations of texture, light, colour and rhythm amongst others to present a singular perspective. By playing with cinematic conventions, experimental films challenge preconceptions about the form and start conversations on the potentials of moving image works.

He Was Once Here by Puangsoi Aksornsawang / 12 min / Thailand / 2016
Having not spoken for six years, Puangsoi Aksornsawang and her father reconnected only for her to find out that he had visited Berlin – her current residence – before she was born. She realises that they share more similarities than she first thought.

Prince of Sihanoukville by Davy Chou / 3 min / Cambodia / 2019
The streets of Sihanoukville, Cambodia at night are awash with neon signs, billboards, and bright lights as the filmmaker takes a car ride through the city.

Lembusura by Wregas Bhanuteja / 10 min / Indonesia / 2015
On February 13, 2014, the active stratovolcano of Mount Kelud in East Java erupted in a fiery rage, spewing volcanic ash over the surrounding towns. Unable to proceed with his film shoot, Wregas Bhanuteja decided to capture footage of the falling ash rain to pass the time.

short/cut by Ostin Fam / 13 min / Vietnam / 2017
Mae, a second-generation Vietnamese teenager living in America, has an obsessive admiration for Angelina Jolie. Mae’s grandmother is over-protective of her granddaughter’s look, especially her long, unruly black hair. One day, Mae passes by a hair salon with an advertisement of her short-haired idol, and decides to transform her appearance.

Schip by Tanatchai Bandasak / 2 min / Thailand / 2010
A ship moves across the water in a landscape.

Tangibility by Toh Hun Ping / 7 min / Singapore / 2004
A moving image of a hand crushing a sheet of paper that gets progressively more distorted with each iteration, as if the film itself is being destroyed, just like the piece of paper it is portraying.

Get a front row seat to these gems by the next generation of filmmakers in Singapore! These student films by up and coming talents from Singapore’s film schools span a wide variety of genres that speak to cinematic excellence and innovation. Featuring works from Ngee Ann Polytechnic, Nanyang Technological University School of Art, Design and Media, LASALLE College of the Arts and School of the Arts.

I Took A Nap and I Miss You by Shelby Kho / 12 min / NTU ADM / 2021
Recently widowed Liz struggles with grief while raising her two daughters – Gigi, a cynical teen venturing into romance, and pre-teen Stacy, whose imaginary boyfriend is her getting bullied at school. A coming-of-age, drama-comedy mockumentary about three women, all operating on what-ifs and varying circumstances of the heart.

Tankboy by Novella / 6:40 min / LASALLE College of the Arts / 2021
When Kevin moves into a new neighbourhood, a strange problem arises: non-stop tears are flowing on and on from his eyes! He comes up with a fool-proof solution: to wear a fish-tank on his head. But is that the best way to deal with his tears?

Leading Lights by Angela Ananya Ramkumar / 9 min / School of The Arts / 2021
Maroon lives in a forest amongst children who dance as a form of self-expression. Burgeoning feelings of resentment and jealousy culminate in her longing to leave and explore the forbidden outside world.

Home Planet by Maximilian Liang / 14:30 min / LASALLE College of the Arts / 2021
Home Planet tells the story of a young astronaut returning to his old family home, for one last goodbye.

Yi Yi (Time Flows in Strange Ways on Sundays) by Giselle Lin / 17 min / LASALLE College of the Arts / 2021
A mother, trapped in the comfort of memory and mourning, confronts her grief when she is invited to the wedding of her late son’s childhood sweetheart.

In Good Times and In Bad by Alisa Yeo / 6:28 min / School of the Arts / 2020
Daniel, a newly divorce father, struggles with the daily chores and an inquisitive daughter. Life takes a twist when he has to confront his ex-wife and her boyfriend during their daughter’s school enrolment. Through all this he gains a deeper appreciation for his daughter and their simple life together.

Pillars of Salt by Hilman Haris Hor / 15 min / NTU ADM / 2021
Having some time to himself at a secluded seashore, Luis re-lives moments from his day, struggling with the guilt of having an affair with his married supervisor at work. He comes to realise that his actions were driven by his unprocessed hurt from the breakdown of his parents’ marriage, and begins the healing process towards living beyond it.

Sweet Sixteen by Donna Chua / 7 min / School of The Arts / 2020
On the day of Carla’s sixteenth birthday party, she ponders on the importance of birthdays, and why birthdays are special.

Girls by Tamara Tan / 15 min / Ngee Ann Polytechnic / 2020
Two teenage girls run away from home. Their plans slowly fall apart, and they find themselves on a journey of self-discovery.