The Young Photographers’ Mentorship Programme, Objectifs’ annual photography mentorship programme for participants aged 15 to 23, included two public talks this year. Read on for a recap of one of these talks, in which Jovian Lim shared his advice on how one can enter the field of commercial photography.

Jovian is the principal photographer at OFFICE AND SERVICES. His photography hovers between realism and romance, and tows the line between the simple and sublime. Using commonplace material, he investigates ever more rarefied forms of expression, attempting to express that which is immutable, stripped of time, space and particularity.

This recap has been edited for brevity.

Beginning his talk by posing his audience with the question: “Where does one start as a photographer?”, Jovian detailed his own foray into the world of commercial photography through the various internships and assistantships he initially sought out and took up. Stressing the importance of “orbiting around” relevant and adjacent industries – by which he included networking with personnel involved, even those who were not photographers, such as makeup artists – he explained how this paved his way and established a firm foothold for himself as a commercial photographer.

Quick to remind his audience, however, about the lesser talked about – but just as important – practical side of a career in commercial photography, Jovian emphasised that “an artistic practice must be sustainable”. As he puts it, one should not be a liability to loved ones. Some ways to do so, especially as a freelancer, would be to ensure that one has personal insurance and self-employed CPF contributions. 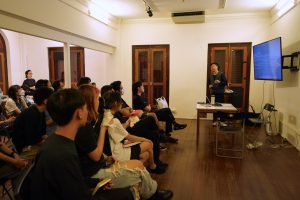 Having a ‘rate card’ (a list that clearly states the prices for the various services provided by the photographer) that is backed by an ample portfolio is a good starting point to begin negotiations with clients, according to Jovian. In fact, as he continued to explain, rate cards are akin to restaurant menus, in the sense that they are customisable, and should take annual inflation rates into account as well. For the latter, rates should be indicated by year so that one’s clients know that they are not static.

Crafting proposals – the next thing in the flow – should focus on deliverables. The duration needed, the scope of work, and when the work would be delivered, are essential inclusions. Sending over a formal quotation at this stage would also ensure an early alignment of expectations and goals between the client and photographer. Recommending the usage of visuals in presenting the proposal to one’s client, Jovian explained that this would help photographers to get clients onboard as it would lay the main ideas out more clearly and concisely. Site visits and the sourcing for props will then follow. In truth, Jovian said, “most of the work is done pre- and post- shoot to ensure that the day of the shoot goes smoothly and quickly”.

Defining the quotation as a formal agreement between the photographer and client where all agreements for the shoot are spelt out, Jovian emphasised that it is imperative to input as much information and specifics about the shoot as possible, with no room left for grey areas in this document. The quotation should therefore set perimeters for the project, and manage expectations on both sides. It should address the ‘when’ and ‘where’, as well as contain the following details: output, timeline, overall charges with clear breakdowns (i.e., photographer fee, assistant fees, clean-up fees, no-show fees, late cancellation fees), along with the terms and conditions for distribution rights of the photos through various avenues.

All of these will protect both parties and ensure that everyone will walk away happy, and it will make things clear in the event that there is contest after, Jovian continued. A project’s term and conditions are entirely customisable, and a photographer’s control over them is entirely fluid; one could even include details such as whether meal provisions for one’s crew would be included in the quotation. Most importantly, this gets the legalities out of the way early. 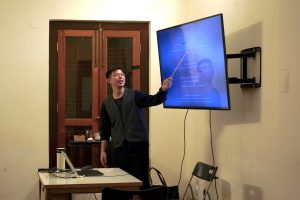 Summing up most of what he has said thus far, Jovian stressed that it is imperative to flesh out as many details as possible during the negotiation stage to avoid misalignment of expectations between the photographer and their client. “Get everything down in black and white. Reduce ambiguity by being specific. This is not to think of the client as being at loggerheads with the photographer, [but] to think about it as working together well. Weed out [the] misconceptions and misalignments.”

In order to give one’s client a good experience, this would mean “letting them know that you have prepared for the shoot, foreseen possible obstacles, and planned thoughtfully [for them]”. It means “giving them good expectations on how the shoot will flow, [and] scheduling the shoot around the client’s expectations, showing [them] care and thoughtfulness.”

Paid work requires photographers to apply themselves very practically, whereas a personal project can sometimes feel like the opposite, Jovian stated. How is a photographer to separate their time well so that they can work on both paid work and personal projects? This would require the setting of a start and an end, with the creation of a structure for one’s personal project, with a goal, so that one would be able to move out of the abstract. Jovian recommended ‘time-boxing’ personal projects. 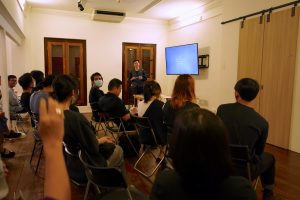 Ending off his talk with an answer to a question from the audience about whether it would be preferable for a photographer to specialise in one thing or be a jack-of-all-trades, Jovian replied that this would depend on whether the photographer would prefer to apply themselves to many different types of projects and “be on the move”. Crucially, a photographer “must have clarity of purpose and self-awareness”, he said, but above all, he espoused the belief: “Be authentic to yourself, and your tribe will find you”.