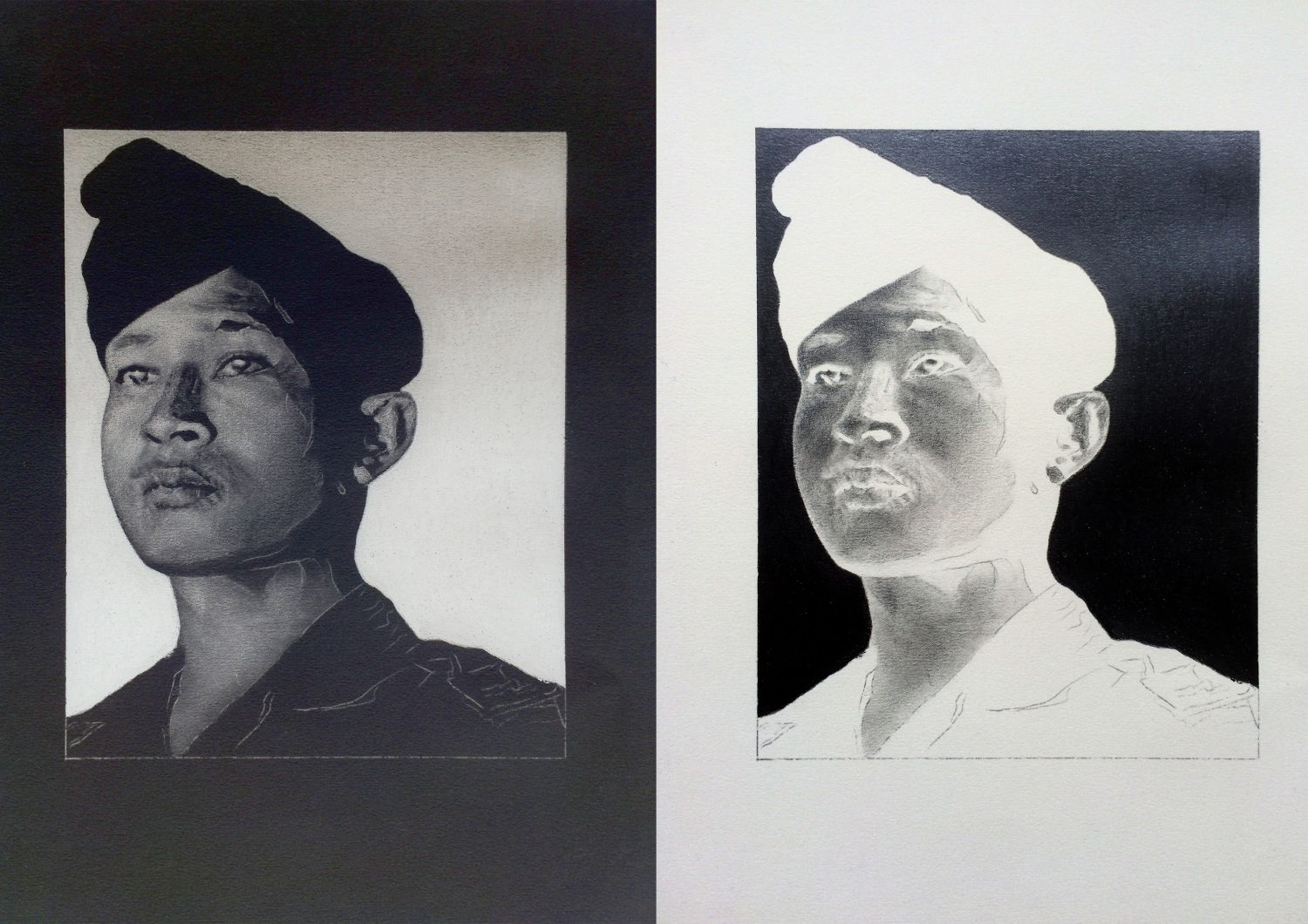 The exhibition looks at photographic imagery, and its impact in our remembering and re-forming of personal narratives. The process started with the artist drawing negative images of reportage photographs of Indonesian politics across a 30-year period, from its independence in 1945 through a period of transition of Soekarno’s National Independence to Soeharto’s New Order. The viewer is invited to use his/her mobile device, with invert settings turned on, to see the positive image. Shifting between the modality of drawing and photography, Boedi Widjaja reflects viscerally upon the imagery of his personal history, seeking agency.

Imaginary Homeland is featured as part of Singapore Art Week 2016.

The artist produced book accompanying this exhibition is available for sale via our physical and online stores. Please click here to purchase.

Boedi Widjaja (b. 1975) was born in Solo City, Indonesia, and lives and works in Singapore. Trained as an architect, he spent his young adulthood in graphic design, and turned to art only in his thirties. Widjaja’s childhood urban migration due to ethnic tensions, living apart from parents and rotating amongst stranger-families, informs his investigation into concerns regarding diaspora, hybridity, travel and isolation, often through an oblique, autobiographical gaze. The artistic outcomes are processual and conceptually-charged, ranging from drawings to installations and live art.

Recent accolades include being shortlisted in the Sovereign Asian Art Prize (2015) and named one of eleven ArtReview Asia FutureGreats (2014); receiving the Grand Prize (Sound Arts; with David Letellier) at Bains Numeriques in France (2012); First Prize in the Land Transport Authority Art Competition – Beauty World Station (2012); Finalist for Celeste Prize(2012); and Highly Commended Award at the 31st UOB Painting of the Year (2012). He recently completed a research residency that was supported by the National Arts Council Singapore at DRAWInternational, Caylus, France.

He has had solo exhibitions at Jendela Visual Arts Space, Esplanade (2014), The Substation as its Visual Arts Open Call recipient (2012), and Yellow River Arts Centre Singapore base at the opening of Gillman Barracks (2012); and a forthcoming solo at the Institute of Contemporary Arts Singapore (2016). He has shown in group exhibitions at National Museum of Singapore, Singapore Art Museum, San Diego Art Institute, ArtJog, Centrale Montemartini in Rome and Museum of Sydney.