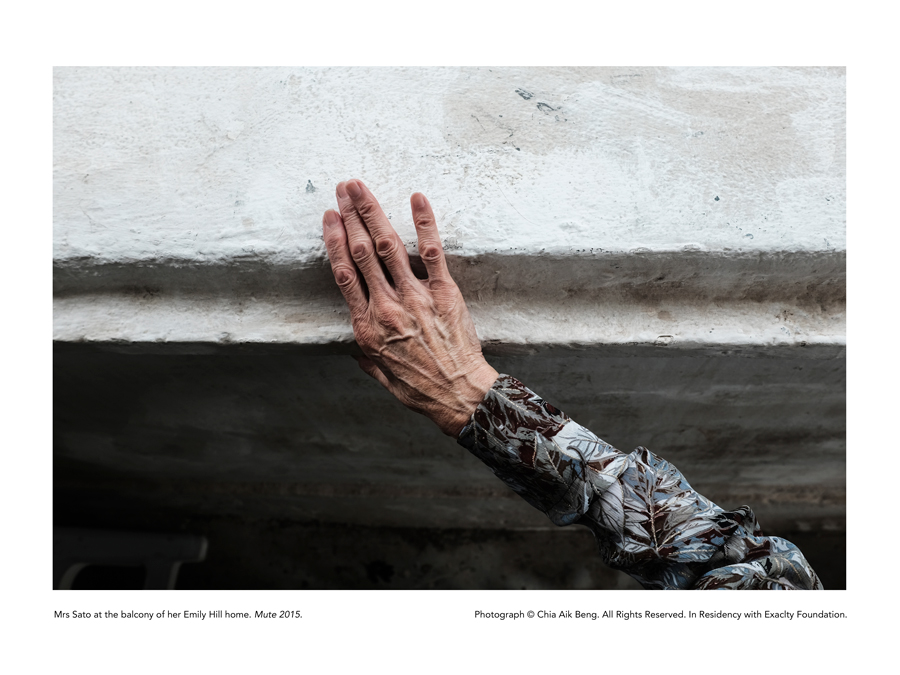 TILL WE MEET AGAIN – WHAT TO KEEP? & MUTE

TILL WE MEET AGAIN – WHAT TO KEEP? & MUTE

About Till We Meet Again — What to Keep?
By Lau Eng Seng | Curated by Chia Aik Beng
Since 2009, Lau Eng Seng has been intensively documenting Rochor Centre, a high-rise complex housing 567 households, 187 shops and eating places and which is nearly 40 years old. In 2011, it was announced that Rochor Centre would be demolished to make way for the new North-South Expressway.

In Till We Meet Again – What to Keep? Eng Seng, an Exactly Foundation resident artist, culminates his seven years documenting Rochor Centre by capturing its “packing up”, during which residents must decide on what to keep and what to throw out. The process is, on a smaller scale, a reflection of selective heritage preservation in Singapore. Not only will Singapore’s city centre skyline change with the disappearance of these colourful blocks, but so will another testament to the legacy of former deputy prime minister Dr Toh Chin Chye, whose efforts to integrate the elderly into the community included a home for senior citizens in Rochor Centre. Where will Rochor Centre’s inhabitants go?

About Mute
By Chia Aik Beng | Curated by Lau Eng Seng
Many in Singapore roughly know the Bugis area’s early inhabitants to be 17th-18th century Bugis-Malays from Sulawesi and 1960s’ transvestites, but what was going on in Bugis and Middle Road in the 100 years in-between? Right there, from the 1860s to 1945, was Little Japan.

Exactly Foundation resident artist Chia Aik Beng faced the challenge of not having “decisive moments” to shoot; rather, he had to shoot traces of material evidence, all requiring a good dose of imagination to “see” the forgotten Little Japan of Singapore. Mute is his personal take on Little Japan’s erased history and buildings, its red-light district where Bugis Junction stands now, the plight of Japanese prostitutes (karayuki-sans) and the economy then. He also documents his encounters with elderly Japanese, resident and visiting, who remember Little Japan, and his eye-opening visits to Singapore’s Japanese cemetery park, which was the first major burial site for the young karayuki-sans.

Two books documenting their residencies will also be launched at the exhibition opening.

About Lau Eng Seng
Lau Eng Seng graduated with a Diploma in Fine Art from the Nanyang Academy of Fine Arts in 2012 and is currently pursuing his Bachelor of Fine Arts at the Nanyang Technological University. He has exhibited actively in Singapore and overseas and has won second place in the US-based International Photography Awards 2013. In 2015, he was featured in the Singapore Eye: Contemporary Singapore Art publication.

About Chia Aik Beng
Chia Aik Beng, popularly known as “ABC”, started photographing in 2008. His vivid, gritty images of single moments in people’s daily lives on Singapore streets have earned a strong following of over 34,000 on Instagram. In 2013, he launched his first monograph Tonight, the Streets Are Ours, published by Invisible Photographer Asia, and since 2014, he has been a contributor to @everydayasia. His ongoing project, Singkarpor, was published in 2015.

About the Exactly Foundation
Exactly Foundation is a not-for-profit, trademarked registered label established by Li Li Chung. Photographers are commissioned to create photography to stimulate discussion of social concerns in Singapore. The Exactly Foundation’s goal is to produce new knowledge amongst viewers by engaging with and sharing the photographs with family and friends over a three-month period.