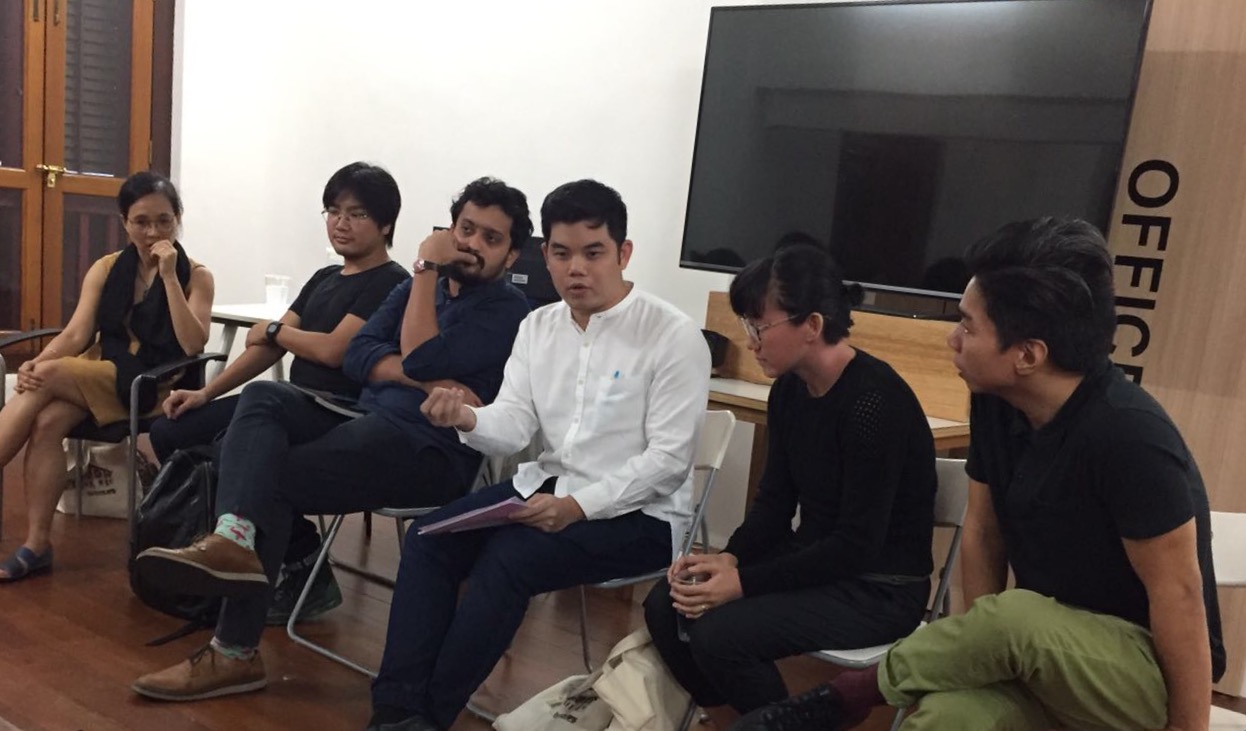 Asian Film Focus 2017, themed Time Machine, explores the use of archival and found footage in contemporary filmmaking in Asia, highlighting short films from Vietnam, India, the Philippines and Singapore.

In the first of two dialogue sessions, panellists Shireen Seno, John Torres, Nguyen Trinh Thi, Liao Jiekai and Amshu Chukki discussed the construction of personal stories and memories through film, particularly through the use of archival and found footage. The panel was moderated by Thong Kay Wee, Outreach Officer at the Asian Film Archive.

Read more about AFF’s line-up here, and catch up on our interviews with the programmers of the AFF in our news section.

Asian Film Focus 2017: Time Machine runs at Objectifs through Sat, 15 Jul. Join us for screenings tonight (Fri, 14 Jul) and tomorrow; tickets are $5 / screening and available online or at the door. A free dialogue session on the role of short films in the film landscape will take place on Sat, 15 Jul, at 7pm.

The panellists began by introducing their respective filmmaking practices and detailing their use of archival and found footage including personal and home videos.

John Torres, “stuck with heartbreak and a camera”, started making diaristic short films in 2003 as a way of expressing raw emotion. His first short, Tawidgutom, is in this vein and was part of Thursday’s AFF screening. In the post-screening Q&A, Torres shared that this deeply personal piece was never initially meant to be screened for a public audience. He also stated that he yearned to return to this early period of his filmmaking journey, where he was freely exploring personal themes and not expected to cite cinematic influences or comment on the Philippines’ politics. His latest feature film, People Power Bombshell: The Diary of Vietnam Rose, is more documentary-like.

Liao Jiekai has used archival photos and editing room outtakes in his work, but for him, using “found footage” is mainly about the rediscovery of his own old material, rather than others’ work. He shoots on “every format of moving image”, without a particular project in mind, and appreciates the unique look and feel of each material. While the starting points of his works are often very personal, he “reappropriates [his] own footage”, creating a distance by taking it out of its original context or by simply allowing for time to pass before he uses it. For example, his film Silent Light, screened at AFF 2017, uses footage he shot on expired film at his grandmother’s funeral wake, simply to document the experience of staying up all night with his sister and seeing the sun rise. He juxtaposed this with audio of an interview he conducted with an elderly Singaporean actress, who shared her thoughts on life and death.

Shireen Seno started making films in 2009. Her work is an effort to connect “personal myths with larger cultural moments”. For her feature film Big Boy, she asked her father to retell stories she’d heard from him growing up, and noted that they “got magnified in each telling”. She incorporated this sense of scale literally into Big Boy, which is about a boy’s growth.

Amshu Chukki, a visual artist who uses video in his works, is also concerned with scale. He is driven by the question of “what happens to cinematic landscapes after the fiction is carried out?” He is currently exploring this through a project about Ramoji Film City in Hyderabad, India, the world’s largest film studio complex. In his film Dispatches screened at AFF 2017, abstracted scenes from the film Razia Sultan, which features a doomed 13th-century romance between the only female sultan of Delhi and an Abyssinian slave, play out on monitors in several sites in Delhi that are strongly associated with the African community.

Amshu removed the characters from this “highly racist” but iconic film but retained snippets of its landscapes as short loops. The ordinarily curious Indian public seemingly ignores these large monitors in crowded public spaces. Similarly, viewers of Amshu’s film start to pay attention to the contemporary landscapes occupied by the African community in Delhi, rather than the unchanging empty ones framed within the monitors.

Nguyen Trinh Thi is driven by curiosity. For her, film just happens to be the medium that helps her to understand the world and make sense of reality. At the beginning of a project, she “doesn’t understand things”. It is in the process of doing research, editing found footage that connections emerge. As the footage she uses is reconstructed in her process to say something new, she too gains new insights and perspectives on certain historical events.

Kay Wee observed that the lines between personal and collective or national memories are often blurred in these filmmakers’ works. The panellists agreed with this sentiment.

John Torres shared that as he has moved away from personal, deeply confessional filmmaking to incorporating public and political issues in his work, he has occasionally been accused of disrespecting not only polarising politicians but also nationally esteemed filmmakers. He reflected on how his efforts to “unearth the film” footage from which he made People Power Bombshell: The Diary of Vietnam Rose reminded him of protests in the Philippines to “exhume the dictator”, Marcos, who was buried in a national heroes’ cemetery. He perceives his works as opportunities to process “attempted failures”, which could be equally applicable to his earliest works processing heartbreak.

Amshu Chukki shared that outside of Bollywood and other major regional Indian cinemas, independent film and especially video art are neither hugely supported nor governed by the authorities, though the current government is more heavy-handed. For him, Dispatches is a response to recent racist attacks against Africans in India, subverting violence by talking about the “love journeys” of African / Indian couples.

Nguyen Trinh Thi’s work is inevitably tied to Vietnam’s socialist history; she “grew up in it”, it is Vietnam’s immediate history and they are “still living it”. In addition, the found footage most readily available to her is Vietnamese socialist cinema; classics are released yearly on DVD, while other materials are hard to access. For Thi, popular media is in fact valuable as it “already contains our collective memories”. Reinterpretation of history is still forbidden, and Thi is convinced “all [her] films are probably illegal”. Notably, they also all end in violence. Regardless, without seeking prior permission, she continues to re-claim, re-construct, and re-interpret through film.