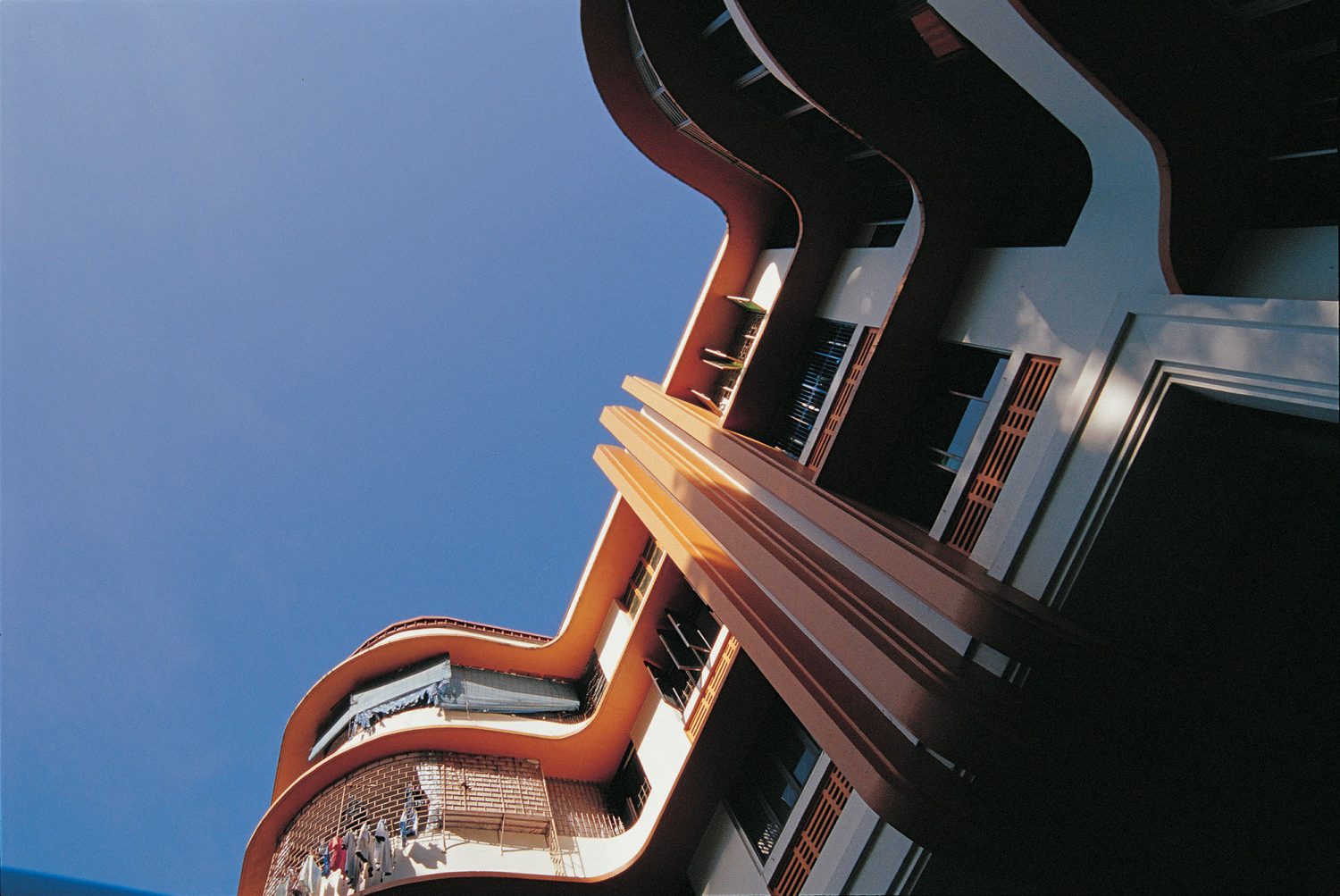 This year is the 100th anniversary of the Bauhaus Movement, the influential German school of design and architecture. bauhaus imaginista x Singapore marks this occasion by looking at how Bauhaus impacted design internationally, including how the movement left its mark on Singapore’s landscape.

bauhaus imaginista is a modular travelling exhibition that investigates the legacy of the Bauhaus through four areas of research from the perspective of challenges faced by the world today. It uses four objects created by key thinkers of the Bauhaus — Walter Gropius, Paul Klee, Marcel Breuer and Kurt Schwerdtfeger — as a point of departure to articulate the transcultural exchanges and encounters that informed the movement, and how its ideas were subsequently modified, adapted or rejected in different local contexts.

Alongside this is a showing of 14 large photographic prints of local modernist architecture by the late Singapore photographer Jeremy San, which exemplify the Bauhaus concepts of simplicity and functionality. San’s artistic practice emphasised the sensorial aspects of the built environment. With a singular eye for light, texture and detail, his images are evocative depictions of past and present spaces in Singapore.

This discussion will look at the process of conceiving the bauhaus imaginista exhibition, and how the Bauhaus movement influenced Singapore design and architecture.

Dr. Eduard Kögel studied at the faculty of Architecture, Urban and Landscape Planning at the University of Kassel in Germany. From 1999 to 2004 he taught as Assistant Professor at the Technical University in Darmstadt in the department of Non-European Architecture and Urban Development. 2007 he finished his dissertation at the Bauhaus-University in Weimar. Between 2009 and 2011 he directed a research project on architecture and urban form in China at the Habitat Unit at Berlin Institute of Technology (funded by the German Research Foundation DFG). Eduard Kögel works on the development of architecture and urban planning in Non-European countries and on the topic of transformation in architecture and urban form. He is expert in the analyses of urban structures and lectures regular at Berlin Institute of Technology. He is member of the Scientific Committee of ABE Journal – online, open access peer reviewed magazine for European Architecture Beyond Europe and member of the Advisory Board of the Journal of Chinese Architectural History at Qinghua University in Beijing.

Having close to 30 years of experience in the academia, Puay-Peng’s main interest is to integrate research, teaching and practice in his research areas of architectural history and conservation practices. Prior to joining NUS in 2017, Puay-Peng was Professor of Architecture and served as Director of School of Architecture and University Dean of Students at The Chinese University of Hong Kong. Sustaining his research is the quest to understand religious culture and its architectural forms. His main focus is Buddhist architecture and ritual of medieval China. Puay-Peng is a conservation consultant, architect and adviser to some 100 conservation projects in Hong Kong since 2013, including PMQ, Haw Par Villa, Comix Homebase, Oil Street Art Space, Court of Final Appeal, and New Campus for Chicago University Booth School. Puay-peng Ho was also appointed to many public and private boards and committees in Hong Kong, including as Chairman of the Lord Wilson Heritage Trust, member of Town Planning Board, Antiquities Advisory Board, Housing Authority.

Justin Zhuang is a writer and researcher with an interest in design, cities, culture, history, and media. Together with Sheere Ng, he co-runs Singapore-based writing studio In Plain Words. He is also the founder of the Singapore Graphic Archives. He has written for Design Observer, art4d, and AIGA Eye on Design. Zhuang’s publications include Mosaic Memories: Remembering Singapore’s Old Playgrounds (2013), School Crests Examination: The Stories behind the Symbols (2013), and INDEPENDENCE: The history of graphic design in Singapore since the 1960s (2012).

Dr Widodo received his first professional degree in Architecture from Parahyangan Catholic University (Ir., Bandung, Indonesia, 1984), Masters of Architectural Engineering degree from Katholieke Universiteit Leuven (M.Arch.Eng., Belgium, 1988), and Doctorate in Architecture from the University of Tokyo (PhD, Japan, 1996). He is the director of the Tun Tan Cheng Lock Centre for Asian Architectural and Urban Heritage in Melaka (Malaysia), and Executive Editor of JSEAA (Journal of Southeast Asian Architecture) at the Department of Architecture, National University of Singapore. He is the founder of mAAN (modern Asian Architecture Network), iNTA (International Network of Tropical Architecture), and mASEANa (modern ASEAN architecture) project/network. He serves as a jury member for UNESCO Asia Pacific Awards for Cultural Heritage Conservation, is a member of ICOMOS Scientific Committee and National Committee of Indonesia, is a founding member of ICOMOS National Committee of Singapore, and is an associate member of the Asian Academy for Heritage Management. He is also one of the founding members of DoCoMoMo Macau. Dr Widodo also serves as a member of the Preservation of Sites and Monuments Advisory Board of the National Heritage Board of Singapore.

Jeremy San Tzer Ning was an accomplished architectural photographer based in Singapore, who documented local as well as regional architectural works in Malaysia, Hong Kong and China. Schooled in RMIT, Melbourne, Australia as an interior designer, his graduation thesis was an ambitious photo-documentation project of modern heritage buildings that also spawned his photography career.

Upon graduation, Jeremy practiced as an interior designer in the architecture office KNTA Architects. He also collaborated with experimental design studios HAM Architects, LingHao Architects, and AT Lab on various competitions and proposals.

His design training and practice experience gave him an emphatic eye as a photographer capturing architecture – whether historic, newly completed, or even under construction – as well as urban landscapes. He was engaged by leading design firms including Alsop Architects, Foster + Partners, Atelier Liu Yuyang, K2LD Architects, Formwerks, KUU, Farm Works, UOL, DP Architects, and ip:li Architects. His works are widely published, including in journals such as ish, Cubes, and Singapore Architect. He was also commissioned by Urban Redevelopment Authority (URA) to work on the Singapore 1:1 exhibitions (in 2005 and 2007) and has collaborated with Studio Lapis on conversation documentation projects such as Victoria Theatre and Concert Hall. In 2012, he was awarded the Discernment Prize at the ICON de Martell Condon Bleu photography awards.

Over a span of 10 years until his untimely passing in 2013, Jeremy travelled across the island documenting Singapore’s modern heritage, much of which has since been lost. Many of these images have been published in Our Modern Past, a three-volume publication by the Singapore Heritage Society. They are a sampler of his extensive, invaluable, and exceptional visual legacy.