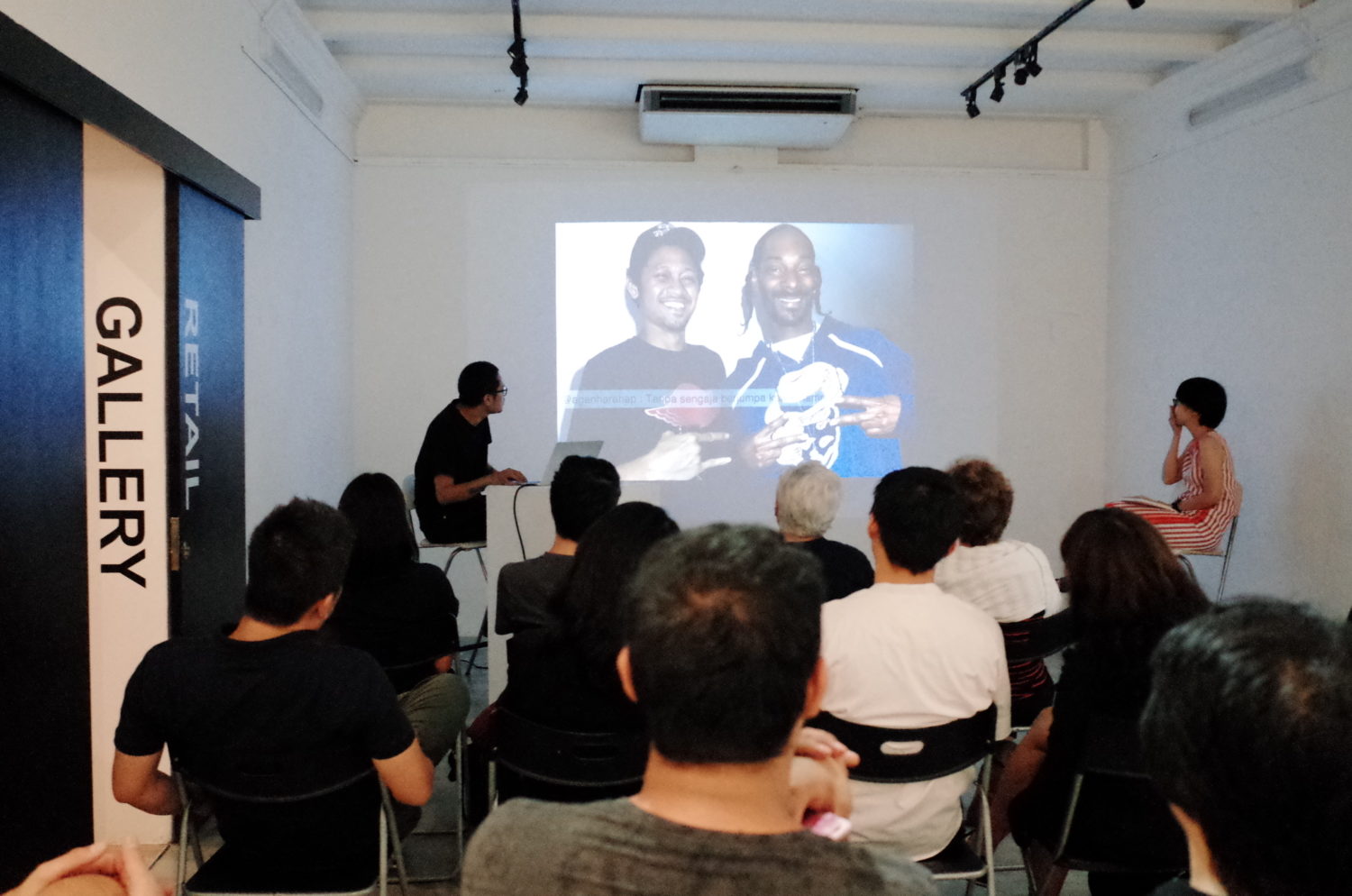 Agan's Photoshopped images include photographs of him with famous pop culture icons like the rapper Snoop Lion. Agan tells the 'stories' of his supposed encounters with these celebrities on his blog, and enjoys viewing the responses to his posts.
RESIDENCIES

Agan Harahap spent February 2017 at Objectifs as an artist in residence for our reciprocal residency programme with Cemeti Art House in Yogyakarta, Indonesia. He ended his time here with a sharing session on his practice and his work done in Singapore.

By Agan’s own admission, his journey into image manipulation was a path of necessity. Back in 1999, as a graphic design student at STDI (Design and Art College) in Bandung, Indonesia, he did not enjoy photography assignments. In order to “pass the exam”, he would borrow his friends’ images, edit them in Photoshop and successfully “fooled the lecturers”.

After graduating in 2005, he moved to Jakarta and worked as a photo retoucher at a wedding photo studio. When offered the opportunity to be a “real photographer at a music magazine”, he interviewed with a borrowed portfolio and got the job, at the Indonesian publication Trax.

While at Trax, Agan’s ambition to become an artist persisted. He read in a newspaper about an open call for the Indonesia Art Award in 2008, and to his surprise emerged a finalist.

In 2009, a friend involved with MES56, a photography and contemporary art collective in Yogyakarta, invited him to show his work. Once again, he responded, “Sure, why not”, and held his first solo exhibition there.

From there on, he began to develop his practice, and became a full-time artist in 2011.

Agan took the audience through his work, which combines elements from Western popular culture (in particular celebrities) and the local, in particular Indonesian politics.

“The digital era has changed many things in our life. When you go to restaurants, [it used to be that] first you pray when the food arrives. Now, we take photos and put them online.”

With increased access to hardware and software, it has undoubtedly become easier to both transmit and consume news, especially about figures in the public eye, like pop stars and politicians. His work on Western celebrities supposedly ‘caught’ in precarious positions in Indonesia has been widely circulated online.

In some works, Agan inserts himself into his Photoshopped images, appearing as friends with the popular figures within. He writes up these supposed ‘encounters’ on his widely-read blog Melman and the Hippo (entries in Bahasa Indonesia), and enjoys observing the reactions he gets in the form of comments and likes.

However, Agan’s works do not just function as tongue-in-cheek commentary on the public’s tendency to assume and spread rumours without verification, or about a clash between western and eastern ideals. In the Indonesian context, in particular, they also speak to perceptions of urban and rural areas within his home country.

He shared that he was inspired by a friend, originally from Sumatra, who collected and posted online selfies he took with celebrities he encountered in Jakarta. When people from his friend’s home island saw the images, they believed he had become very successful in the capital and naturally counted such famous people as tight friends.

Celebrities are not a new phenomenon, and Agan’s body of work includes projects that explore the pre-digital era. Taking advantage of the dearth of public information surrounding earlier Indonesian political figures, he has made images that build on the few facts, some obscure or unconfirmed, known about them.

For example, rumours abounded about Indonesia’s first president, Sukarno. Agan noticed that there were not many photographs of him. For the 2013 Jakarta Biennale, Agan invented the character of Amrizal Chaniago, a fictional palace photographer, and exhibited “Sejarah X”, a series of manipulated ‘undocumented’ ‘official’ photos featuring Sukarno with pop culture figures of the same era. So convincing was Agan’s series, that he got a call from the Bung Karno Foundation, seeking to acquire the photos for their documentation.

While Agan was able to explain to the Bung Karno Foundation that his photographs were fictional artworks, his images have faced the risk of censorship before. However, he shared that thus far, he has avoided getting into serious trouble, by staying on the right side of the law. Due to his work’s playful nature, liberties taken with the truth are also understood as humour.

Agan ended his presentation by sharing his work pursued during his month-long residency in Singapore. Riding on world famous metal band Metallica’s much hyped concert here in January 2017, he produced a series of photographs showing him hanging out with the musicians.

Even an hour into Agan’s talk, it was difficult to be sure whether these were Photoshopped or not, or to what extent they were, especially given the story he shared about meeting them through a friend. He had set the images in locations like the 24-hour Al Jilani Restaurant just down the road from Objectifs. Having heard from Agan about his explorations in the neighbourhood during his residency, it seemed very plausible that he had simply introduced his friends from Metallica to his new favourite haunts.

Did we, too, want to associate ourselves by proximity with someone that knew the members of Metallica personally? Or, was it just the pleasure of believing that when in Singapore, international celebrities, too, just want to eat prata?

Agan’s photo series of Metallica in Singapore below, credit to the artist: