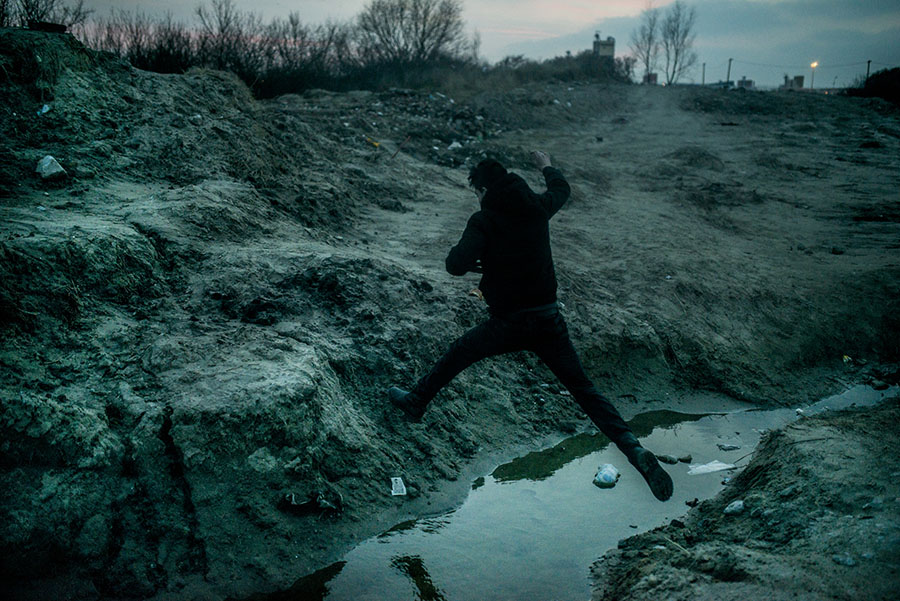 Jungle is the nickname given to a refugee camp in the vicinity of Calais, France. Before it was demolished in 2016, according to Help Refugees, there were 9106 men, women and unaccompanied children living here in the mud, tents or temporary shelters which they had built and decorated themselves. All of them the had the same goal: to enter the UK.

In 2015 the infrastructure of the Jungle developed rapidly. There were churches and mosques built of sticks, tarpaulins and plastic, papered with blankets. Syrians, Afghans, Sudanese, Kuwaitis, Kurds, Pakistanis and many more lived side by side among the seventy restaurants, shops and hairdressers that stretched along the main street.

In August 2016 much had changed. Some had been reunited with their relatives in the UK and were waiting for their first asylum interviews. In October, the eviction of the Jungle started and after three weeks the camp was demolished. Some of the refugees were moved to temporary asylum accommodations. Others lived on the street while trying to reach the UK.

Six months later the area of the Calais Jungle was emptied of people. The many refugees that have arrived to the coast since then have settled in smaller groups in order to not be found by the police. The only thing that shows how many people lived here once, are the hundreds of toothbrushes lying in the sand, next to the tear gas grenades still fired at night.

About Nora Lorek
Nora Lorek (b. 1992, Germany) has lived in Gothenburg, Sweden since 2005. She holds a BA in Photojournalism from Mid Sweden University and has worked as a concert photographer and with various news media outlets for the past six years.

In addition to assignments, she works on long term documentary projects, with a focus on migration and human rights, to visualise the stories behind the statistics and headlines. Since 2015, she has reported on the Calais Jungle, a project that has earned international recognition.

In 2016, Nora was the first Swede awarded College Photographer of the Year, which led her to National Geographic and her ongoing project in Bidibidi, Uganda, one of the world’s largest refugee settlements.

Nora is represented by Panos Pictures