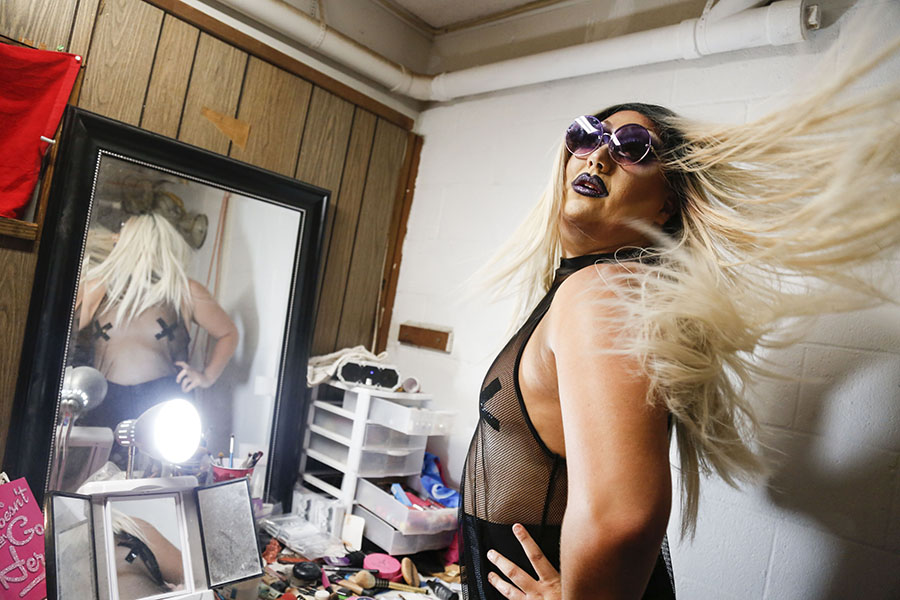 Women in Photography 2018 Exhibition
Beyond the Root | Marie Eriel Hobro

‘Ohana has always been a well-known value of Native Hawaiian culture. For Hawai’ians, our concept of what family is often extends beyond blood and family roots. When one is considered Hanai, they are considered family and treated as such. These values have always been prominent in Hawai’i’s drag scene, but during the days of bars/clubs like The Glades and Fusions, certain drag family names held prestige and weight. When one wanted to pursue a path in drag, they would turn to an experienced queen for guidance. These experienced queens were called drag mothers, and would teach aspiring queens the craft. After the rise of RuPaul’s Drag Race and the closure of multiple different LGBTQ+ staples in Honolulu, the importance of these family names began to lose meaning. In addition, the societal progress we’ve made with the LGBTQ+ community has eliminated the younger generation’s need for the support of a drag family. Instead of searching for drag mothers to learn from, aspiring performers have turned to television and YouTube as a way to learn the art. Now that the younger generation is beginning to realise that they need more support, the concept of having a drag family is slowly returning.

Yet instead of forming mother-daughter relationships with one another, many performers believe that it has transformed into more of a sisterhood. Beyond the Root explores the evolution of drag families in Hawai’i and how they reflect the values of having a Hanai ‘Ohana. The project is ongoing and focuses on three different generations of drag – the up and coming, the middle generation and the older queens. Despite their generational gaps and differing values, these groups come together to help each other and learn from one another and the generations before them.

About Marie Eriel Hobro
Marie Eriel Hobro is a documentary photographer and filmmaker from Wahiawa, Hawai’i of Filipina, Spanish, Chinese and Danish descent. She received her education from Brooks Institute and attended the Eddie Adams XXIX Workshop as a student in the Fall of 2016.

Hobro enjoys working on colorful, quirky stories that defy odds and celebrate individuality. In addition to this, she is also passionate about changing the stereotypical narratives associated with Hawai’i and working on stories about POC and the LGBTQ+ community.

Her main goal with her storytelling is to amplify and empower unique, diverse voices in society. She is available for assignment anywhere.