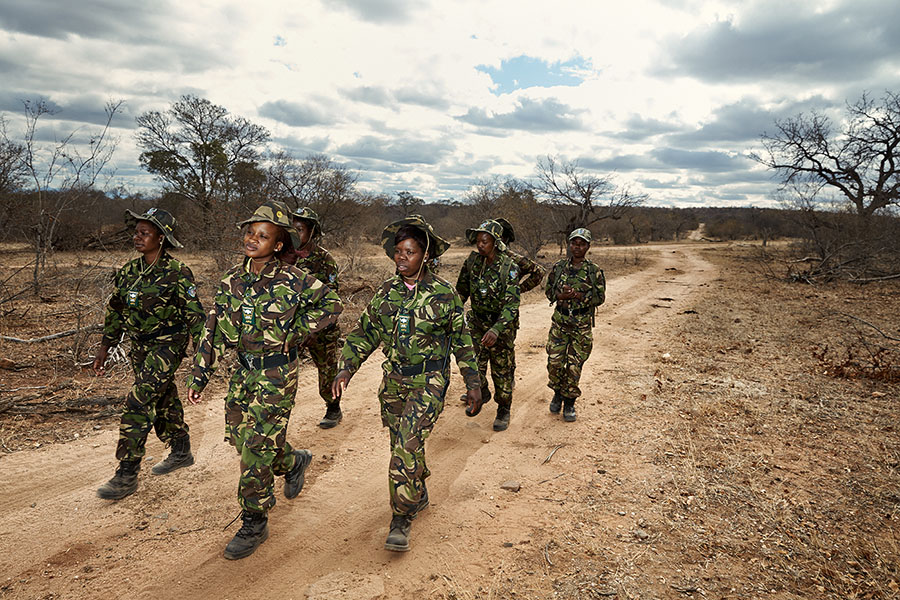 There are only 28000 rhinos left in the wild in Africa, 95% of which live in South Africa. The reserves in Africa are so enormous that countries like South Africa are struggling to police them effectively. Thanks to the vast increase in demand from Asia, the poaching of rhinos has risen with a staggering 9300% in the last 10 years. But the poachers don’t just poach rhinos. More than 35000 elephants and thousands of lions, kudu and impala are killed every year for their ivory, for bush meat, or to be used in the ‘traditional’ medicine trade in Asia.

Aside from the conventional forms of prevention: armed quick reaction forces and hi-tech surveillance, there are other, more grassroots efforts that have begun to spring up in southern Africa. These efforts are guided by the philosophy that the war against poaching cannot be won with guns and bullets, but through social advancement and the education of communities surrounding nature reserves. Although less high profile, these alternative anti-poaching programs seem to be an effective tool in tipping the scales in favour of conservation.

The Black Mambas are an almost exclusively female anti poaching unit of 31 women and 1 men, which operates, unarmed, in Balule Nature Reserve, near Kruger National Park, in north-eastern South Africa. They are trained in anti-poaching and survival skills and are taught to identify and track humans and animals, how to blend in with their surroundings and how to avoid confrontations. Their training is crucial as the animals they track are wild, and poachers shoot to kill.

Their anti-poaching strategy includes ‘visual policing’ through daily boundary patrols which are conducted on foot during first light and by vehicle at last light, manning observation and listening posts stationed in critical areas such as known entry and exit points, and monitoring popular waterholes for signs of poisoning. The Black Mambas also live in a series of compounds inside the reserve, which affords them a constant presence in the park.

Awarded with the UN’s top environmental award, “Champions of the Earth”, the Black Mambas act as role models in their own communities (where many of the poachers live). As women and mothers, they command a form of respect that the heavily armed, most male anti-poaching units, do not.

About Julia Gunther
Julia’s work focusses primarily on social justice and global health, especially the role of women in sub-Saharan Africa society. Her work has been featured in international publications such as the New York Times Magazine, TIME, The Independent, Marie Claire, Dazed, WIRED and the National Geographic.

Julia’s photography has been exhibited in New York, London, Cape Town, South Korea, Sydney, Amsterdam and selected by exhibitions and festivals around the globe. Most recently, Julia’s work has been selected for the Taylor Wessing Photographic Portrait Prize Exhibition 2016, and has won awards at The New York Photo Festival’s The Last Picture Show 2015 and the Moscow International Foto Awards 2015.