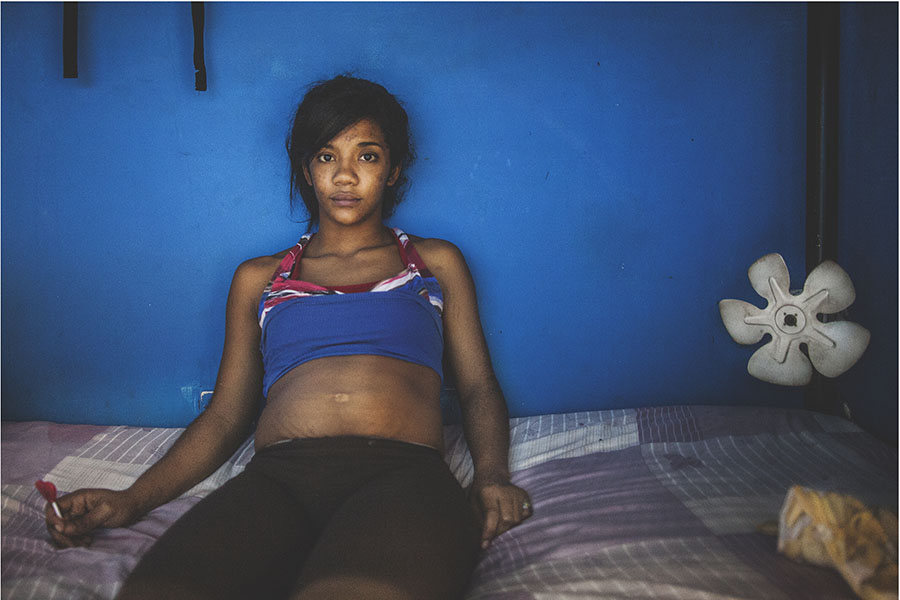 How are female prisoners, especially pregnant women, affected by the current economic and social crisis that Venezuela is facing?

Due to the closure of penitentiaries and overcrowding in Venezuelan prisons, transitory centres for detention are functioning as an alternative prison system. According to the law, detainees are under the obligation to remain no more than 45 days before the preliminary trial has been carried out. These transitory centres originally constituted “temporary” shelters for remand prisoners.

This work exposes the living conditions inside these correctional facilities or centres of detention for pregnant detainees, whose length of stay is undefined. They have no knowledge of when or if they will be transferred or released.

In September 2016, the Ombudsman Tarek William Asaad confirmed that out of 96,000 Venezuelan prisoners, 33,000 are  in these temporary centres. Even more concerning is the fact that 3,000 of these prisoners are serving their term within these cells. These jails are usually located in residential areas or public spaces throughout the country.

Around 30% of the police force of this country is used for the custody of these inmates. Many of these officers have neither the education nor resources to protect inmates from more dangerous prisoners.

Many pregnant women are currently living under inhumane conditions in these transitory centres; they do not have any other option than to await their sentence or release. In these jails there is no respect for the penitentiary system law for the United Nations Treatment of Women Prisoners and Non-custodial Measures for Women Offenders (The Bangkok Rules).

In these centres, pregnant and breastfeeding women live in overcrowded cells. They live in unhygienic conditions, with no water supply or medical attention. Furthermore, some of them do not know their child’s due date. They receive food from their families, which ought to be supplied to them by the state. The ones that do not have a family or support depend on the solidarity of the other inmates to share their food. It is not surprising that many of these women and their babies suffer from malnutrition and disease.

Inside the detention centre in Los Teques, capital of the state of Miranda in the north of the country, there are no outdoor spaces or any health programs for pregnant women. One female prisoner became pregnant five months after her imprisonment; the overpopulation of the penitentiary centres for detention mean that female and male prisoners have to share the same cells.

This brings us to the essential question; what conditions, both physical and psychological, do these women and their future babies have to endure?

The overcrowding of these facilities is the cardinal problem of the Venezuelan prison system, a reflection of the dysfunctional National Judicial Branch.

These pregnant women survive under these extreme conditions, forgotten by society, lost in a Dantesque tangle that keeps them under inhumane conditions.

Venezuelan law permits the children of women prisoners to stay with them until they reach three years of age. The constitutional incertitude in which the mothers live and their atrocious life circumstances make it impossible for their children to stay with them.

About Ana Maria Arevalo Gosen
Ana Maria Arevalo was born in Caracas, Venezuela in 1988. In 2010 she moved to Toulouse, France. After studying political science for a year, Ana was admitted to the ETPA, école supérieure de photographie in 2011, where she developed a taste for documentary photography. In 2011, she met a family of Romanian gypsies in Toulouse. She photographed and documented their lives over a period of three years, in a series entitled Les Gitans de Toulouse.

In spring 2015 Ana attended a workshop with the LFI in Hamburg and the photographer Jacob Aue Sobol, where she created the images and music for a work entitled, Crashing into you. This granted her a sponsorship with Leica cameras to work on her personal projects.

Ana returned to Venezuela in 2017 where she began a project on the living conditions of women in centres of detention.

​She has been published in publications such as Libération, Tal, Szene Magazin, Der Spiegel, 20 Minutes.