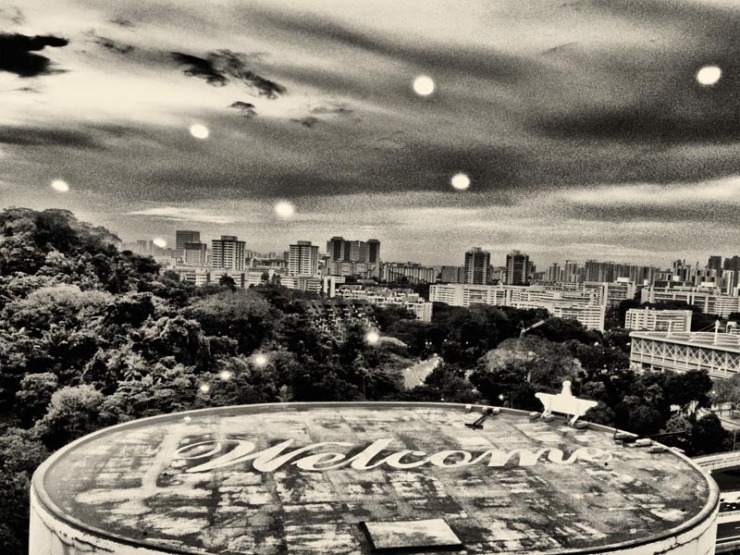 Objectifs chats with Deanna Ng, whose 2nd solo exhibition, Garden City, is currently showing at Objectifs Gallery.  Deanna is an independent documentary photographer and educator, who participated in Objectifs’ annual photography mentorship programme Shooting Home in 2004. She has participated in several group shows, including the Month of Photography Tokyo, and had a solo show at the Institute of Contemporary Arts Singapore in 2009.

She was one of the shortlisted artists for the prestigious Icon de Martell Cordon Bleu Photographer of the Year Award in 2010, and one of the selected photographers for Nikon’s Through Asian Eyes project. Deanna also teaches photography at Objectifs.

Objectifs: This new series Garden City seems a departure from your more well-known portrait work.  Why landscapes?  Did you need a break from shooting people?

Deanna: I’ve always been fascinated with the trees on our little island. Sometimes walking around, I can’t help but marvel at how it transforms our landscape from an urban city into something that looks like it came out from a fairy tale. Looking back at my notes, the idea of the project actually started in 2005 when I researched on the types of trees that are planted on our streets. I couldn’t fathom how I was going to do the project without making it look like a catalogue of tree species in Singapore. The idea became clearer in 2008 when I shot a tree in my neighborhood as a Christmas greeting to friends and family. It was a tree in my neighborhood that, when I squint my eyes, looked like a Christmas tree.

After working on the Lien Foundation’s Life before Death project in 2008 and 2009, shooting landscapes became a way for me to clear my head and I like the quietness of it. You don’t have to talk when you’re shooting landscapes (except for a couple of times where I got questioned by the police but that’s another story). Also, most of my commercial work involves photographing people. Although I love it, sometimes the daily grind of dealing with the logistics and administration of organizing a shoot can be draining. Nothing is more liberating than picking up a small point and shoot camera and just heading out to shoot what you want to shoot. When night falls, landscapes become my excuse to just wander around and remember why I became a photographer in the first place.

Objectifs: There is a certain ‘quietness’ or stillness to the photos that is very intriguing. It is certainly not the usual impression we have of Singapore. Did you set out purposely to capture this aspect of the Singapore landscape?
Deanna: Maybe it was the frame of mind that I was in or I could have been responding to the scene. When I shoot in markets or on location, I love the chaos and the activities that buzz around me. I feed off that energy. The more chaotic the place is, the better my pictures are. For Garden City, I actually tried shooting our city in the day at first but the pictures didn’t work for me.

For example, for ‘Townhouse’, I was struck by how the spotlights made the billboards glow in the dark in a big open field that was going to be turned into a condominium. Here was another open space that was going to be filled by buildings. It looked strangely eerie and beautiful in the night and reminded me of the field that I played rounders in when I was a kid, which subsequently became a car park. It is a bittersweet image. In daylight, that image wouldn’t work but at night, it conveyed how I felt about it.

Objectifs: Has anyone ever compared this series to Darren Soh’s ‘While you were Sleeping’? What have been some of the reactions to the work?

Deanna: For a start, Darren started “While you were sleeping” because he had insomnia. I, on the other hand, couldn’t wait to get back to bed after shooting!

From the few people I’ve shown it to, the reactions to the work have been interesting. People draw their own conclusions when they see the images. Someone said that the night mood is strong and the images were about the night. Another said that my images are hopeful. A few have thought that it borders on being a social commentary. I’m curious to hear what others have to say.

Objectifs: How did you choose some of the locations you shot?  Did you actually already have a number of places in mind before embarking on the series?  Or was it more a process of discovery and exploration?

Deanna: It’s a mixture of both. I do note down places that I think are interesting but a lot of times, when I get there, it’s not what I imagine it to be or it doesn’t translate to what I want to say in an image. Yet, when I looked around, there was another picture to be made. I wasn’t looking so much at a location but a scene.

Once I was shooting near the golf driving range in Toa Payoh. I was obsessed with some vines that were creeping up the steel beams of the spotlights and spent about an hour shooting that. I thought that it showed how nature adapts in an urban environment where space is tight. As I walking out to the bus stop, I saw a tree that was sandwiched between two buildings in an industrial park. I felt claustrophobic for the tree. Being constrained, there was no way but up for the tree because the branches would be trimmed. In the end, this unexpected scene translated what I felt and was included in the series while the other image was dropped.

Objectifs: What’s next?  Are you going to go back to portraits?

Deanna: Garden City is going to be an on-going project. It’ll be interesting to see how some of the scenes change over the years. It’s still my escape from daily life so I don’t see why I should stop. Shooting this project and preparing for the exhibition did make some of my thought processes clearer about what I want to show about Singapore and I would like to see that in my portraits.