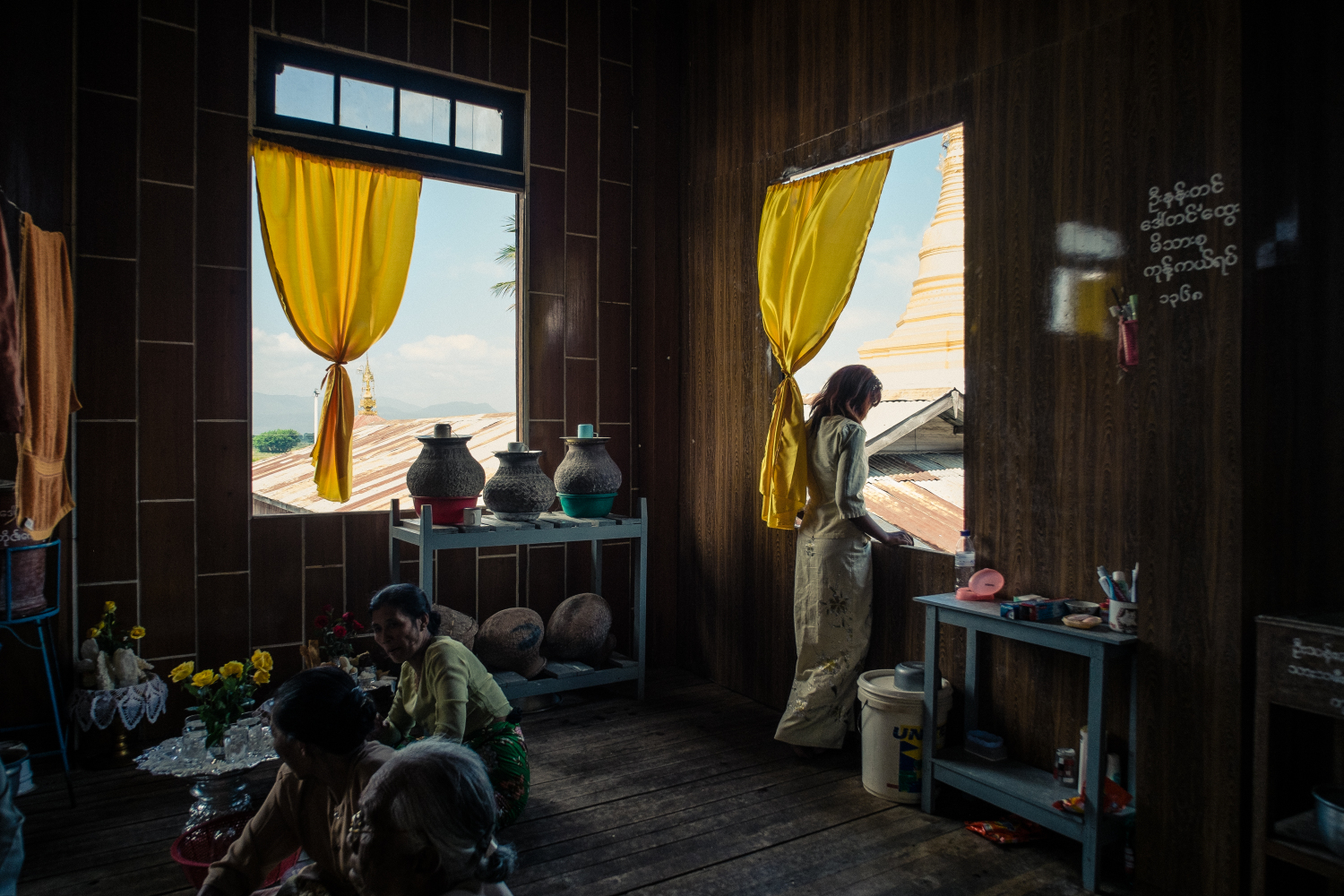 Myanmar is a complex society that has often been the focus of attention. From cultural exoticism to political and social events that have sent ripples around the world, Myanmar has been a source of both wonder and concern. This exhibition will attempt to explore both the contemporary issues facing Myanmar in the context of its social history.

The three bodies of work to be exhibited are:

Katha: In the steps of George Orwell in Burma by Julio Etchart

To coincide with the 75th anniversary of the publication of Burmese Days, George Orwell’s famous novel, award-winning photojournalist Julio Etchart went to follow the thread of his story by documenting the original locations in present day Myanmar.
Orwell spent five years from 1922 to 1927 as a police officer in the Indian Imperial Police force in Burma, then a province of British India. He served in a number of locations, but it was Katha, north of Mandalay, that provided the physical setting for the novel. It was his experience in this isolated outpost that inspired him to write the book. It is a story about the waning days of the Raj, and one of the greatest denunciations of imperialism ever written, and a powerful critique of the colonial mindset that underpinned the system. Etchart’s images and travelogue are combined with quotes from the original novel as captions for many of the photos. The project was originally shown at the Frontline Club in London, at the launch of the Orwell Prize for political writing.

Documentary photographer Tom took his first visit to Myanmar in 2013, 5 years after the release of Aung San Suu Kyi and the much talked about ‘opening up’ of the country. Aware of the tensions between the traditional and the modern – present in so many cultures – and against a background of tumultuous political and social issues brought to the fore in recent years he wanted to see how the often romanticised culture of the Burmese was being affected by these issues.

As he walked through the streets of Yangon and explored the popular tourist destinations of Bagan and Inle Lake, he tried to read between the lines, to get close to the people and walk alongside them as they went about their lives. While in such a brief visit he could only scratch the surface, he hopes the photographs made in that time reveal what he felt; that this place, so exoticised, is much like anywhere else. The people here have their own joys, their own struggles and their own part to play in the wider social drama that extends beyond national borders and political boundaries and affects us all.

After independence in 1947, war-torn Yangon experienced a promising, though sort-lived economic and cultural revival, which reflected a vision shared by the city’s multi-ethnic residents. Dr. Li Yi is a Post Doctoral Fellow in the History Programme at the School of Humanities and Social Sciences at Nanyang Technological University. She has been researching the history of the Chinese community in Myanmar from the XIX century onwards. She has sourced some fascinating archival images from that period and she will contribute a short article on the subject.

Tom White
An instructor at Objectifs, Tom White studied Fine Art at Goldsmiths College, and Photojournalism and Documentary Photography at the International Center of Photography in New York. Tom has taught classes at Columbia University’s School of Journalism and at the International Center of Photography. He has also worked extensively with the ICP’s Community Programs department, teaching darkroom photography classes and working with youth on a post incarceration/at risk program. His work has been published in the US and UK, including The New York Times. See more of Tom’s works on www.tomwhitephotography.com

Julio Etchart
Julio Etchart grew up in Uruguay and studied Documentary Photography and Photo-journalism at Newport Art College. He has since traveled round the world for the international media and has also worked as still photographer, consultant and researcher for film and TV companies. He produces audiovisual material and touring displays for Non Governmental Organizations like War on Want, Save The Children, OXFAM, Christian Aid, CAFOD, VSO, UNICEF, the British Council and the European Union. After being awarded a World Press Photo First Prize in the Environment category, he producedThe Four Elements a touring exhibition on ecological issues, sponsored by the European Union and War on Want. His first photo-book, The Forbidden Rainbow documented the legacy of 500 years of European involvement in the Americas. Julio’s long-term project on children’s play around the world, Toys, was published in four languages by Mets & Schilt, Amsterdam, in 2006, and won him an UNICEF award. It has been exhibited as a touring display in many countries. More information about Julio is available from www.julioetchart.com.

Dr Li Yi
Dr Li Yi is a Post Doctoral Fellow in the History Programme at the School of Humanities and Social Sciences at Nanyang Technological University. She has been researching the history of the Chinese community in Myanmar from the XIX century onwards. She has sourced a collection of archival images from that period and she will contribute a short article on the subject.